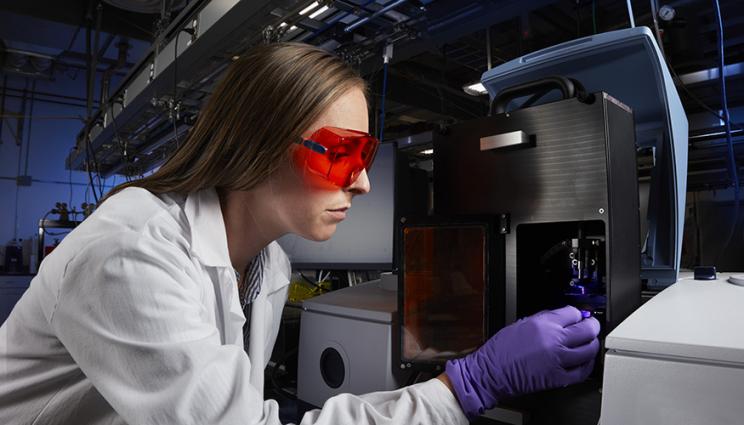 Versatile and ubiquitous, glass is increasingly found in specialized applications such as fiber optics, consumer electronics and microfluidics for “lab-on-a-chip” devices. However, traditional glassmaking techniques can be costly and slow, and 3D-printing glass often results in rough textures, making them unsuitable for smooth lenses.

Using a new laser-based Volumetric Additive Manufacturing (VAM) approach — an emerging technology in near-instant 3D printing — researchers at Lawrence Livermore National Laboratory (LLNL) and the University of California, Berkeley have demonstrated the ability to 3D-print microscopic objects in silica glass, part of an effort to produce delicate, layer-less optics that can be built in seconds or minutes. The results are reported in the latest edition of the journal Science.

Nicknamed “the replicator” after the fictional device in “Star Trek” that can instantly fabricate nearly any object, the Computed Axial Lithography (CAL) technology developed by LLNL and UC Berkeley is inspired by computed tomography (CT) imaging methods. CAL works by computing projections from many angles through a digital model of a target object, optimizing these projections computationally and then delivering them into a rotating volume of photosensitive resin using a digital light projector. Over time, the projected light patterns reconstruct, or build up, a 3D light dose distribution in the material, curing the object at points exceeding a light threshold while the vat of resin spins. The fully formed object materializes in mere seconds — far faster than traditional layer-by-layer 3D printing techniques — and then the vat is drained to retrieve the part.

Combining a new microscale VAM technique called micro-CAL, which uses a laser instead of an LED source, with a nanocomposite glass resin developed by the German company Glassomer and the University of Freiburg, UC Berkeley researchers reported the production of sturdy, complex microstructure glass objects with a surface roughness of just six nanometers with features down to a minimum of 50 microns.

UC Berkeley Associate Professor of Mechanical Engineering Hayden Taylor, the project’s principal investigator, said the micro-CAL process, which produces a higher dose of light and cures 3D objects faster and at higher resolution, combined with the nanocomposite resins characterized at LLNL proved a “perfect match for each other,” creating “striking results in the strength of the printed objects.”

“Glass objects tend to break more easily when they contain more flaws or cracks or have a rough surface,” Taylor said. “CAL’s ability to make objects with smoother surfaces than other 3D-printing processes is therefore a big potential advantage.”

LLNL co-author Caitlyn Krikorian Cook, a group leader and polymer engineer in the Lab’s Materials Engineering Division, characterized the curing kinetics of the nanocomposite resin with light exposure. Printing higher-viscosity resins is challenging, if not impossible, with current traditional stereolithography systems at LLNL, Cook said, adding that the benefit of VAM for micro-optics is that it can produce extremely smooth surfaces without layering artifacts, resulting in faster printing without additional post-processing time.

“You can imagine trying to create these small micro-optics and complex microarchitectures using standard fabrication techniques; it’s really not possible,” Cook said. “And being able to print it ready-to-use without having to do polishing techniques saves a significant amount of time. If you can eliminate polishing steps after forming the optics — with low roughness — you can print a part ready for use.”

Cook performed in-situ resin characterization with a spectrometer to measure the thresholding response of an inhibitor modifier in the material’s photopolymerization kinetics. The modifier, combined with the preciseness of the laser VAM method, was the “secret sauce” to printing high-resolution optics at a microscale.

“By creating a thresholding response, we’re able to significantly improve the resolution,” Cook said. “We’re taking advantage of the similar thresholding response reported in our previous work, except we’re implementing it in a different class of photopolymer chemistry. We’re beginning to better understand the necessary kinetics for volumetric manufacturing.”

For the past several years, the LLNL/UC Berkeley VAM collaboration has experimented with different resins and materials to create intricate objects. The latest advancement stems from a study with UC Berkeley to discover new classes of versatile materials that could expand the range of chemistries and material properties achievable through the VAM method.

Real-world applications could include micro-optics in high-quality cameras, consumer electronics, biomedical imaging, chemical sensors, virtual-reality headsets, advanced microscopes and microfluidics with challenging 3D geometries such as “lab-on-a-chip” applications (where microscopic channels are needed for medical diagnostics), fundamental scientific studies, nanomaterial manufacturing and drug screening. Plus, the benign properties of glass lend themselves well to biomaterials, or to cases with high temperature or chemical resistance, Cook added.

The Berkeley/LLNL team also is examining applications in bioprinting, such as fabricating organs or “lung-type” structures using a combination of VAM and projection micro-stereolithography.

At LLNL, Cook said she and her team will further tune the resolution of VAM and the doses required for variable range of resolutions and print speeds. Cook is continuing to support characterization and materials development, and Dominique Porcincula and Rebecca Walton, members of her Functional Architected Materials Engineering group, currently have a VAM feasibility study to advance the VAM glass printing efforts for larger optics.

“The challenge with printing glass is that the larger the part, the more significant the shrinkage stresses are when going from a green state to burning out the binder between the silica particles into a brown part to fusing the particles together into a fully dense glass part. Cracking problems typically arise in larger prints due to these shrinkage stresses,” Cook said. “Our teams at LLNL are developing custom formulations to produce larger optics and glass printed parts that will not crack during the de-binding and sintering processes.”

The latest work at LLNL was funded by the Laboratory Directed Research and Development (LDRD) program.