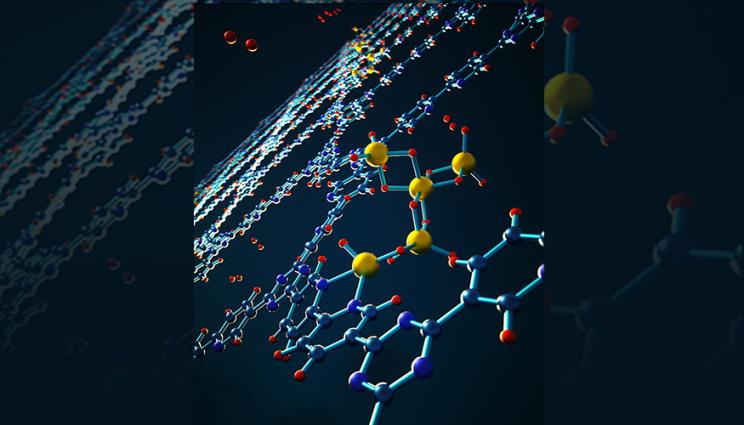 View of a subnanoscale reversible alane cluster coordinated to a bipyridine site on covalent triazine-based framework that can be used in hydrogen storage systems.

Hydrogen is increasingly viewed as essential to a sustainable world energy economy because it can store surplus renewable power, decarbonize transportation and serve as a zero-emission energy carrier. However, conventional high-pressure or cryogenic storage pose significant technical and engineering challenges.

To overcome these challenges, Lawrence Livermore National Laboratory (LLNL) and Sandia National Laboratories researchers have turned to metal hydrides because they provide exceptional energy densities and can reversibly release and uptake hydrogen under relatively mild conditions. The research appears as a hot paper and back cover in the journal Angewandte Chemie.

Solid-state metal hydrides with high volumetric and gravimetric hydrogen densities are attractive alternatives to gas-phase hydrogen storage. However, many high-capacity metal hydrides suffer from poor thermodynamics of hydrogen uptake after initial release, which necessitates extreme hydrogen pressures to regenerate. Such a limitation is often tied to their metastable nature and hinders their real-world applications.

In the recent research, the scientists found a new way to ease the thermodynamic limitation. The team focused on one typical metastable metal hydride called alane. Alane, or aluminum hydride, has a volumetric hydrogen density twice that of liquid hydrogen. However, converting bulk metallic aluminum into alane was long thought to be impossible except under extreme conditions with more than 6,900 atmospheres of dihydrogen (H2) pressure.

The team developed a nanoconfined material with improved thermodynamics of alane regeneration. They found that alane situated within the nanopores of a highly porous bipyridine-functionalized covalent triazine framework can be regenerated at a H2 pressure of only 700 bar (690 atmospheres), which is tenfold lower than that required for its bulk counterpart. This pressure is readily achievable in commercial hydrogen fueling stations, although further improvements are necessary to achieve rapid fueling.

Through a combination of sophisticated spectroscopic and microscopic experiments, as well as first-principles modeling by Li, they found a surprising and nonintuitive mechanism for the stabilization of alane. The mechanism involves formation of intrinsically stable radicals and tiny alane clusters that interact chemically with the nanopores of the confining framework, giving rise to thermodynamics that are completely different from the bulk material.

“Nanoconfinement is a really interesting approach for stabilizing metastable hydrogen-storage materials, particularly given the wide palette of potential host materials,” said LLNL materials scientist and co-author Brandon Wood, who leads the LLNL team on materials-based hydrogen storage. “Beyond hydrogen storage, this work also could have implications for tuning properties of other energy-generation and storage materials, including batteries and catalysts.”

Other LLNL co-authors include Maxwell Marple and Harris Mason. The work is funded by the Department of Energy, Office of Energy Efficiency and Renewable Energy, Hydrogen and Fuel Cell Technologies Office, through the Hydrogen Storage Materials Advanced Research Consortium (HyMARC).