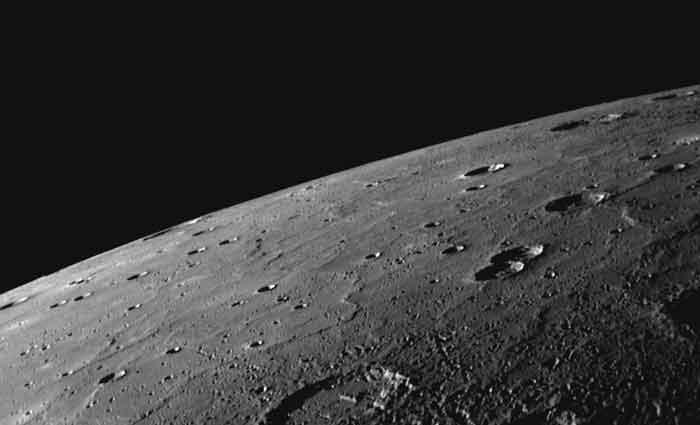 A new study answers a longstanding mystery about why Mercury’s surface – shown here in an image from the MESSENGER mission – is darker than the Moon’s surface. This study implicates carbon as a “stealth” darkening agent. Photos courtesy of NASA.

Peering into space, the surface of Mercury appears dark and unreflective, an observation that has long puzzled planetary scientists due to the planet’s very low surface abundance of iron (less than 2 percent).

Iron is an important darkening material in airless bodies like the moon and asteroids.While the intense space weathering environment on Mercury, which efficiently converts the small amount of available iron into submicroscopic metallic iron, contributes to its dark surface, this effect is not sufficient to explain observations of Mercury’s appearance. As a result, researchers have long speculated that a "mystery darkening agent" must be contributing to Mercury’s dark surface.

In a study published today by Nature Geoscience, a team of researchers investigate, whether carbon, delivered by comets and/or comet dust, could be this elusive mystery darkening agent.

"Our study answers a longstanding mystery about why Mercury’s surface is darker than the moon’s surface, by implicating carbon as a "stealth" darkening agent, which is difficult to detect with available remote sensing methods," said lead author Megan Bruck Syal, a postdoctoral researcher at Lawrence Livermore National Laboratory. "Mercury is effectively painted black by the constant influx of carbon-rich micrometeorites." 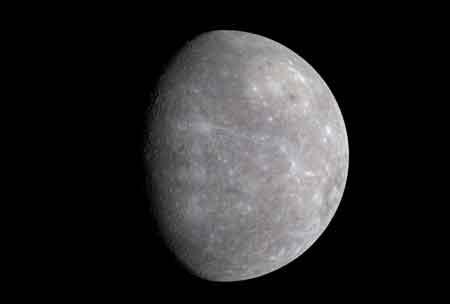 Numerical calculations to assess impact delivery of carbon on Mercury found that micrometeorites, which are mostly derived from carbon-enriched comets, would deliver enough carbon to affect observations of Mercury’s surface. These micrometeorites’ relatively low impact velocities allow most impacting material to be retained by the planet, resulting in surface carbon abundances near 3 to 6 percent.

Hypervelocity impact experiments at the Ames Vertical Gun Range also tested whether carbon could be effectively entrained within glassy, impact-generated melt products, resulting in darker spectral signatures. The results were consistent with remote sensing observations of Mercury by the MESSENGER mission, further suggesting an important role for carbon at the surface of Mercury.

"Without samples from Mercury, planetary scientists rely on spectral modeling of Mercury’s surface to interpret its composition and geologic history," said Syal. "Understanding the role of micrometeorites in delivering dark material to Mercury provides new ways of interpreting observations of the planet. Additionally, we are now working on how micrometeorites may have delivered other materials of interest to Mercury, including water."

Co-authors on this paper include Peter Schultz of Brown University and Miriam Riner of the Planetary Sciences Institute. The research was supported by NASA’s Planetary Geology and Geophysics program and the NASA Earth and Space Science Fellowship program.
Tags:Video
Breanna Bishop
bishop33 [at] llnl.gov
925-423-9802

LLNL finds a place in the sun