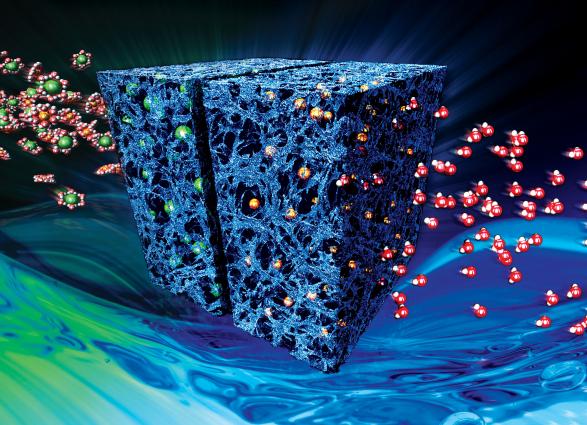 Lawrence Livermore National Laboratory researchers have developed a new capacitive desalination technique that could ultimately lower the cost and time of desalinating seawater.

The new technique, called flow-through electrode capacitive desalination (FTE CD), uses new porous carbon materials with a hierarchical pore structure, which allows the saltwater to easily flow through the electrodes themselves. Flowing through the electrode allows for several significant advantages relative to traditional flow between systems, including faster desalination, more salt removed for each charge of the capacitor, and more energy efficient desalination. Finally, flow-through can be used with a thinner separator as the separator is no longer a flow channel, therefore reducing the overall and electrical resistance of the device, which further decreases costs.

"By leveraging innovative porous carbon materials recently developed at LLNL, our new method removes the diffusion limitations afflicting traditional CD cells. The desalination process now only takes as long as it takes to charge the electrodes, on the order of minutes or less," said Matthew Suss, a Lawrence scholar and first author of a recent paper in Energy & Environmental Science . "The new method currently removes salt five to 10 times faster than previous CD systems, and can be further optimized for increased speed. It also reduces the concentration of the feed up to three times as much per charge."

Capacitive desalination (CD) has advantages over reverse osmosis (RO), the most common way to remove salt from water. With CD, no membrane components are required; it can operate at low pressures and temperatures; and energy recovery is performed with a solid state circuit, which is more scalable and cheaper than the turbines used for energy recovery in RO. However, previous flow between CD methods was unable to easily (in a single-charging step) desalinate moderate brackish water and take a longer time to desalinate.

"FTE CD is capable of desalinating almost all brackish water concentrations in a single step," said Michael Stadermann, the Laboratory principal investigator. "In some regions around the world, including North America, brackish water is projected to be the main source of water for desalination processes that provide drinking water. Brackish water also is the concentration range of effluent from some industrial processes, such as coal bed methane production -- treating this water is essential for proper practical waste reduction. Further, FTE CD performs much better with high salinity streams than regular CD, and lends itself better to energy efficient multi-stage desalination, which allows us to tackle seawater with this method."

Removing salt from seawater and saline aquifers is a key process to ensure a safe and adequate freshwater supply. The majority of worldwide desalination is performed by reverse osmosis plants. Reverse osmosis is typically quite expensive because pressures of more than 1,000 pounds per square inch must be generated to push the salty water through the filters. In addition, after treatment by reverse osmosis, a much more concentrated salty brine remains and must be disposed of.

The research appears in issue 10 of Energy & Environmental Science.