The initiative, known as input data sets for Model Intercomparison Projects (input4MIPs), is featured in a recent edition of the American Geophysical Union journal EOS.

Climate models are powerful tools for investigating global climate changes caused by human activity. These models are based on mathematical representations of the physics, chemistry and biology of the climate system. The response by models to externally imposed conditions, often representing the past or a hypothesized future, helps scientists understand the forces and processes responsible for driving the variability along with the long-term changes in Earth’s climate. 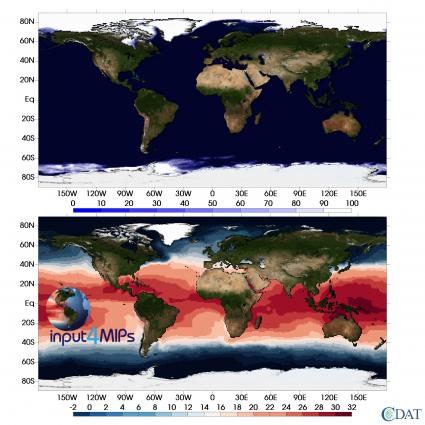 Although climate models have improved over time, no single model perfectly represents all aspects of the climate system. Rather than depending on a single model, scientists rely on simulations by multiple models, each with its own strengths and limitations, to provide a range of possible outcomes. Each new model version revisits key standard experiments, providing scientists with a perspective concerning the robustness of results. The key to this strategy is that each model is "forced" by the same set of externally imposed conditions, so that the model responses to these "forcings" can be assessed.

The World Climate Research Programme (WCRP) Coupled Model Intercomparison Project (CMIP) has led the effort to coordinate international climate model experimentation. LLNL’s Program for Climate Model Diagnosis and Intercomparison (PCMDI) has led this initiative since its inception in 1989 and has steered the international community through five phases of this project. The sixth phase, CMIP6, began in 2017, and input4MIPs provided a key project improvement in "forcing" data set access and consistency when contrasting to the previous completed phases. A critical element in the CMIP is determining what forcing data sets are most suitable for each experiment. In the past, it was not essential to formally document every aspect of every simulation because model simulations were mainly of interest to the climate modeling groups themselves; modelers were aware of the experiment design and the forcing applied.

"Future climate projections from CMIP models may form part of the basis for high-stakes decisions, so it is imperative to strictly and formally document experimental conditions, including the ‘forcing’ data used to drive these simulations. In addition, the community accessing and assessing this model suite has grown by many orders of magnitude over the decades, so better provenance is the key to the utility of these large data sets, now and in the future" said LLNL’s Paul Durack, lead author of the article.

In support of CMIP, the new input4MIPs initiative promises to improve transparency, documentation and consistency in the forcing data sets that are imposed in climate simulations. An additional aim is to better connect modelers with the data providers that are generating these "forcing" data sets, and to allow these data to be made available at more frequent schedules than the CMIP phases. The project leverages the work of LLNL's  Dean Williams and team on the Earth System Grid Federation (ESGF), which provides a federated network distributing these data sets, and the LLNL ESGF node is the project home. Some of these data (see figure above) are based on observations (e.g., sea surface temperatures or greenhouse gas concentrations needed to force simulations of historical and future climate change). Others, like the forcing data employed in the projections called for by ScenarioMIP, are based on hypothetical future conditions. The input4MIPs data products have been endorsed for CMIP6 use and are considered the best available for generating simulations of past, present and future climate. Better provenance and comprehensive documentation provided by this initiative will improve consistency, reproducibility and traceability of the suite of CMIP6 model results.