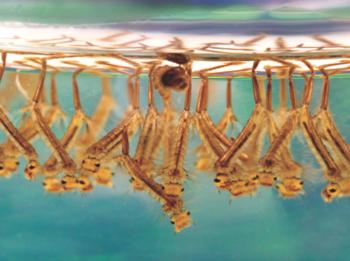 these mosquito larvae cling to a water surface.

The current method of removing the greenhouse gas carbon dioxide (CO2) from the flues of coal-fired power plants uses so much energy that no one bothers to use it. So says Roger Aines, principal investigator for a team that has developed an entirely new catalyst for separating out and capturing CO2, one that mimics a naturally occurring catalyst operating in our lungs. With this success, the Laboratory has become a world leader in designing catalysts that mimic the behavior of natural enzymes.

This small-molecule catalyst, dubbed "Cyclen," mimics carbonic anhydrase, which separates, captures, and transports CO2 out of our blood and other tissues as part of the normal respiration process. Carbonic anhydrase is the fastest operating natural enzyme known. For years, researchers have considered adapting it to capture carbon emitted in industrial operations. But carbonic anhydrase cannot take the heat in the intense conditions of industrial processes. Hot, high-pH flue gas quickly degrades it.

The Livermore team's best designer molecule behaves like carbonic anhydrase but has so far indicated that it is one tough cookie. "In fact," Aines said, "it has turned out to be thermodynamically stable. It is far more rugged than we had expected."

A team performing quantum molecular calculations led by computational biologist Felice Lightstone examined potential candidate molecules. They determined optimal designs to protect the essential zinc ion in the molecule that activates the catalyst. Synthetic chemist Carlos Valdez took the next step. Only about 2 percent of the computationally derived structures made it to the synthesis state. Newly synthesized molecules were tested by chemist Sarah Baker and her team to determine their kinetic behavior and stability. The team made nine catalysts in a year and a half. The name for the finalist comes from the chemical term for the ring around the zinc ion.

The company, a leading supplier of steam-generation and environmental equipment for the electric utility market, will provide benchtop and full-scale testing and process modeling to determine how to implement Cyclen in new processes. A kilogram of the stuff is on its way to Babcock & Wilcox, which is plenty for use in its array of tests. One challenge with Cyclen remains. The catalyst is designed to create a monolayer that clings to a gas-water interface much as mosquito larvae do. However, the Cyclen layer is too thin and some of the CO2 is able to pass through it without being captured. Aines is not worried. "We have demonstrated that quantum molecular calculations can translate into real-world results and that we can synthesize catalysts that do the job."