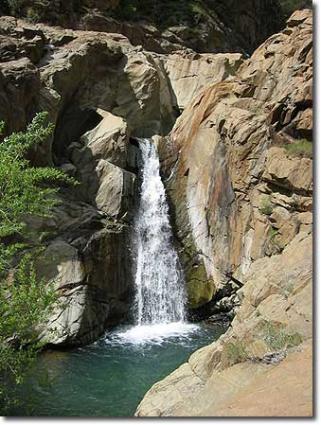 A waterfall on the North Fork of the American River, in the foothills of California’s eastern Sacramento Valley. 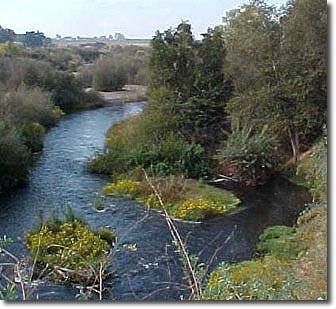 LIVERMORE, Calif. — If the world continues to burn greenhouse gases, California may have an increased risk of winter floods and summer water shortages, even within the same year. This scenario may be more severe in future El Niño years.

The amount of water flowing in California’s rivers needs to be just right. Too much brings a risk of flooding; too little causes reservoir levels to drop.

As temperatures warm as a result of carbon emission, more rain than snow falls at higher elevations. For the areas that do receive snow, melt occurs sooner.

The research shows that this well-known scenario – in which global warming causes an increase in wintertime river flows and a reduction in spring and summer flows – is more robust than previously thought.

"It seems unlikely that any changes in precipitation will be large enough to eliminate these problems," said Philip Duffy, an LLNL physicist and director of the Institute for Research on Climate Change and its Societal Impacts, a University of California Intercampus Research Program. Furthermore, in an El Niño (a naturally occurring climate fluctuation) season, these problems may be more severe.

California’s water infrastructure is very efficient at providing an adequate water supply and minimizing flood risk. The system, however, works well only in a climate that includes large amounts of mountain snow. Melting snow keeps reservoirs full in the late spring and summer, after rain and snowfall have stopped. Snow acts as a natural reservoir, with a volume close to that of manmade reservoirs.

As global warming ensues, more precipitation will be in the form of rain rather than snow. Also, what snow remains will melt earlier in the year. These changes will result in higher river flow rates in California’s major rivers during winter and lower flows during spring and summer, when flows are largely from snowmelt.

"Even if total flows over the whole year are the same, these changes could jeopardize water supplies, because it may not be possible for reservoirs to capture the increased winter flows," said Edwin Maurer, a professor at Santa Clara University and lead author of the research that appears in the Jan. 27 edition of the journal Geophysical Research Letters . "This problem would be compounded by an increased risk of wintertime flooding resulting from higher river flow rates," he said.

"In an El Niño year, which brings more rain than a typical year, there would be an increase (versus today) in the year-to-year variability in river flow rates, which would make life complicated for people who manage the water supply," Duffy said.

The researchers simulated only monthly mean river flows, so they can’t quantitatively assess flood risk, which depends on daily-timescale river flows. However, the monthly flows are high enough to indicate that flood risk would be much higher.

"In particular, there will be increased wintertime river flows and lower spring and summer flows whether future precipitation increases or decreases modestly," Maurer said. "It seems unlikely that the potential problems can be avoided by changes in precipitation." This finding was published earlier this year by Maurer and Duffy.

Institute for Research on Climate change and its Societal Impacts
Program for Climate Model Diagnosis and Intercomparison
&#8220;The Outlook is for Warming, with Measurable Local Effects&#8221;
&#8220;Helping Water Managers Ensure Clean and Reliable Supplies&#8221;