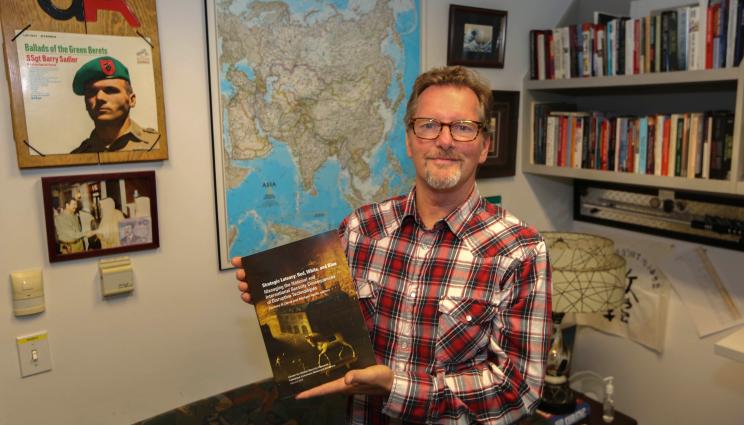 The strategic latency books can be downloaded from the CGSR website.

The edited volume features chapters written by a "Who’s Who" of leading thinkers on technology futures, including the Laboratory’s Ron Lehman on the lessons of Sputnik for strategic surprise, and insights from scientists, scholars, intelligence professionals and the private sector about the ways that technology is changing our concepts of security.

Globalization and the ubiquitous availability of sophisticated dual use technologies assures that nation states, groups and even individuals will possess powerful tools that can be applied for peaceful and military purposes.

Despite the proliferation of such tools, governments retain responsibility for warning (red), analyzing (white) and defending (blue) against science and technology dangers -- while at the same time reaping the benefits that scientific progress provides for society. Striking a balance between these goals presents a formidable challenge.

Book editors Zachary Davis, who is a senior fellow at CGSR (and former Z program analyst), and University of California, Berkeley professor Michael Nacht wrote a chapter about interest of terrorist emerging technologies and the prospects for non-state actors to acquire weapons of mass destruction.

They conclude that terrorist innovations mostly produce tactical advantages -- unless a non-state actor is able to acquire a genuine, game-changing WMD.

A main theme that runs throughout the book is the importance of human intentions in the calculus of science and technology threats and opportunities.

Speculating about possible capabilities does not provide actionable threat warnings, nor does it put cutting edge technologies into the hands of warfighters and intelligence officers, Davis and Nacht note.

Connecting the right tools with specific requirements is the key. This requires a deep and agile science and technology base and a strategy to guide priorities and resources.

The chapter in the blue section by former LLNL manager Lisa Owens Davis outlines the critical role of the national labs in such a strategy, and the section concludes with evaluations of innovative government procurement mechanisms employed by the Defense Advanced Research Projects Agency, In-Q-Tel and DIUx in Silicon Valley. The authors conclude that the U.S. is well positioned to maintain its science and technology lead and protect itself from strategic latency, the potential for technology to be exploited for military purposes.