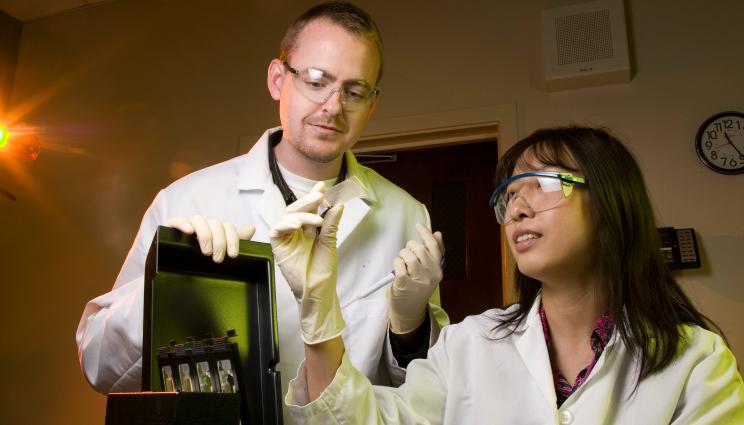 Lawrence Livermore biologists James Thissen and Crystal Jaing are two of the co-authors of a paper that has been published in the online scientific journal PLOS ONE. The paper evaluates a new tool that can help veterinarians seeking to detect and control the spread of animal diseases.

Veterinarians and agricultural inspectors who seek to detect and contain the spread of animal diseases can now turn to a newer, faster and less expensive biological detection system.

Known as the Axiom™ Microbiome Array, or AMA, the new biological detection system is the most comprehensive microorganism detection platform built to date and the first high-throughput microarray.

The LLMDA was licensed in 2016 to Waltham, Massachusetts-based Thermo Fisher Scientific and went on sale later that year as Applied Biosystems™ AMA.

In a yearlong evaluation, published earlier this month in the online scientific journal PLOS ONE, a team of researchers from LLNL, Kansas State University and Thermo Fisher Scientific concluded that the microbiome array "is an efficient tool to rapidly analyze large numbers of clinical and environmental samples for the presence of multiple viral and bacterial pathogens."

"Two of the array’s advantages are that it’s faster and cheaper," said Raymond "Bob" Rowland, professor of diagnostic medicine and pathobiology at Kansas State’s College of Veterinary Medicine. "I live in the world of veterinary medicine and cost is critical.

"If we were to do a test using the LLMDA, it would have cost us about $250 just for the reagents; now with the AMA we can do the same tests for $40."

When LLNL biologists and computer scientists first unveiled the versatile LLMDA in 2010, it could analyze samples for nearly 3,000 bacteria and viruses, all within 24 hours. But it could only analyze four samples a day.

With the 96-well AMA, the new detection system can analyze 96 samples in three days. Additionally, each of the 96 wells contain about 1.4 million probes, so samples are analyzed by about 132 million probes.

"One of the most important conclusions of our study is that this is the first high-throughput microarray that has been developed," said LLNL biologist Crystal Jaing, who heads the LLMDA/AMA efforts. "It increases the throughput by 10- to 20-fold and decreases the cost by five-fold."

As LLNL and Thermo Fisher Scientific researchers moved to a higher throughput microarray, one of the team’s prime goals has been to maintain a high-resolution and sensitivity of detection.

In their PLOS ONE paper, researchers from the three institutions note that with the new array, they were able to detect both Shigella, a food-borne bacterial pathogen, and Aspergillus, a fungal pathogen, at 100 genome copies, as well as vaccinia virus DNA, a genetic relation to smallpox, at 1,000 genome copies.

During their evaluation, the researchers conducted tests with 14 veterinary samples and 30 environmental samples, finding that the AMA performed at a resolution similar to the LLMDA, according to Jaing.

Because of the microbiome array, veterinarians can now conduct multiple tests on a single animal in Rowland’s view.

"This is a technology that is meant for the veterinary technician to use. It’s the everything test for everything.

"We base our testing on pathology. When we see a change in the tissue of an organ, that’s where your pathogen can usually be found.  If we see changes in multiple organs and multiple tissues, now we can sample them all," Rowland said.

According to the PLOS ONE paper authors, "Rapid detection and characterization of bacterial and viral pathogens is important for clinical microbiological diagnostics, public health, veterinary diagnostics, drug and food safety, environmental monitoring and biodefense."

The current version of the AMA has the capability to detect more than 12,000 microorganisms and can identify 6,901 bacteria, 4,770 viruses and a combined total of 842 archaea, fungi and protozoa.

The new arrays, which come in 24- and 96-well formats, can analyze a variety of different sample types and can be used for nutrigenomics, agrigenomics, plus animal research and modeling.