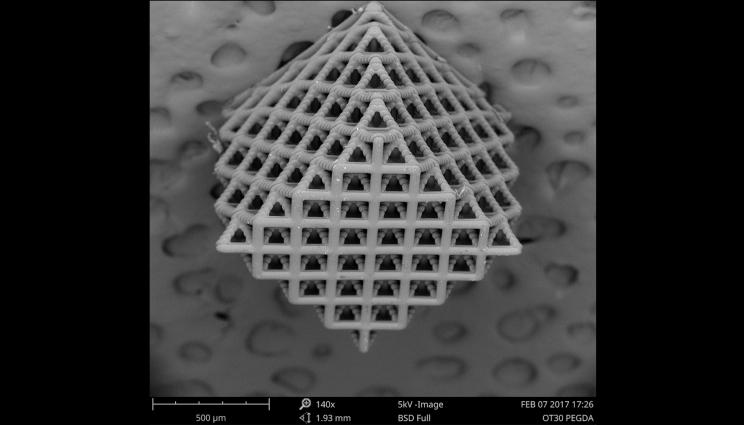 Lawrence Livermore National Laboratory (LLNL) researchers have designed a new class of 3D-printed lattice structures that combine lightweight and high stiffness, despite breaking a rule previously thought to be required to exhibit such properties. One of the new structures additionally displays perfectly uniform response to forces in all directions.

As described in a paper published today by Science Advances, an LLNL team co-led by engineer Seth Watts used topology optimization software that Watts wrote to create two unique unit cell designs composed of micro-architected trusses, one of which was designed to have isotropic (identical and omnidirectional) material properties. These new structures were then fabricated and tested, and were found to outperform the octet truss, a standard geometric pattern for 3D-printed lattice structures.

To the researchers’ surprise, the trusses appeared to violate the Maxwell criterion, a theory of structural rigidity used in mechanical design that posits that the most efficient load-bearing structures deform only by stretching. In such structures, stiffness scales linearly with density — cutting the structure’s weight in half only reduces its stiffness by half, as opposed to less efficient structures whose stiffness would be reduced by three-quarters or seven-eighths. This linear scaling enables the creation of ultra-lightweight, ultra-stiff mechanical metamaterials.

“We have found two trusses that have linear scaling of stiffness with density when the conventional wisdom — this Maxwell criterion rule — is not satisfied,” co-lead author Watts explained. “It had been believed that the Maxwell criterion was both necessary and sufficient to show that you had high stiffness at low density. We’ve shown that it is not a necessary condition. In other words, there is a larger class of trusses that have this linear scaling property.

“It shows that what was the previous orthodoxy is not firm,” Watts added. “There are exceptions, and the exceptions actually can get you better properties.”

Through a projection micro-stereolithography 3D-printing process, which uses light projected onto a photosensitive polymer resin to build objects layer-by-layer, the LLNL team constructed structures with a repeating octahedral and rectified cubic (ORC) unit cell designed to be stiffer than an octet truss of equal density, and with a repeating oblate and quasi-spherical octahedral (OQSO) unit cell structure designed to be perfectly isotropic, so that its mechanical response is uniform regardless of where a load is applied. The designs were then validated experimentally.

The researchers said that due to their uniform response, isotropic lattices can be placed arbitrarily with respect to known – or even unknown – loads, enabling engineers to produce stiffer structures than those built with other types of trusses such as the octet design, which also is ultra-stiff but only in certain directions.

“The isotropic truss allows you to disregard the load direction in a use-case scenario,” said paper co-author Chris Spadaccini, director of LLNL’s Center for Engineered Materials and Manufacturing. “For example, you would no longer have to worry about what angle the loads are coming from. This work really shows that there’s a new method that can get you better performance but has not been explored because it violates conventional wisdom.”

Co-lead author Wen Chen led the experimental and mechanical testing work while a postdoc at LLNL and is now an assistant professor of mechanical engineering at the University of Massachusetts Amherst. Chen tested the samples at different densities to see what would happen when they were compressed at different angles to validate their isotropic properties. Chen said he was surprised by the results and that the research has “improved the promise” of replacing the classical octet truss design.

“It shows you can use this computational tool to design the structure to meet your target performance — this opens up a new design modus for architectured materials,” Chen said. “Secondly, it improves the mechanical efficiency of architected design. For environments where you may have complex stress states, you want to have it as isotropic as possible. This expands the application of our lattices because in a real application you often need a material that can take loading from multiple directions.”

The work is part of an ongoing effort at LLNL to use computational approaches to optimize the design of 3D-printed parts. Watts, who works under LLNL’s Center for Design and Optimization, said the isotropic structures were designed entirely through computer modeling. The new designs, as well as the algorithms used to develop them, are being incorporated into the Livermore Design Optimization (LiDO) code to make these advancements available to other Lab programmatic areas. For instance, researchers already havw used this approach to develop a bespoke unit cell for National Ignition Facility applications.

The researchers said the isotropic trusses could be extended into 3D-printed metals and ceramics and prove useful wherever stiff, yet lightweight material is needed, such as in biological applications like 3D-printed tissues, where tunable stiffness is essential. The aerospace field also demands these properties. In drones or fighter jets, for example, reducing structural weight has the dual benefits of increasing maneuverability and reducing inertial forces, enabling extreme performance.

Lightweight designs also could reduce production costs, fuel usage and material waste, and have a host of other benefits as engineers move toward more optimized structures, Watts said. Researchers added that the latest paper is one of several concurrent efforts at LLNL to design a new library of unit cells with properties specifically tailored to Lab missions.

“We want to expand the design space beyond intuitive designs,” Spadaccini said. “The long-term hope is that we move away from just picking the latest lattice design in the literature and move toward creating and using our own material library. We can use these methods for our specific needs, and the materials will perform better as a result. Ultimately, we would like our engineering analysts at LLNL to use this as if it’s a design tool.”

Watts and his team are continuing their work to include a fuller characterization of the lattice structures, considering physics beyond linear elasticity, including heat transfer, nonlinear mechanics, vibration and failure. Understanding their response across a range of phenomena results in more accurate design of multi-scale structures built using these new metamaterials.

The work was funded by the Laboratory Directed Research and Development (LDRD) program, through the Center for Design and Optimization and Center for Engineered Materials and Manufacturing.