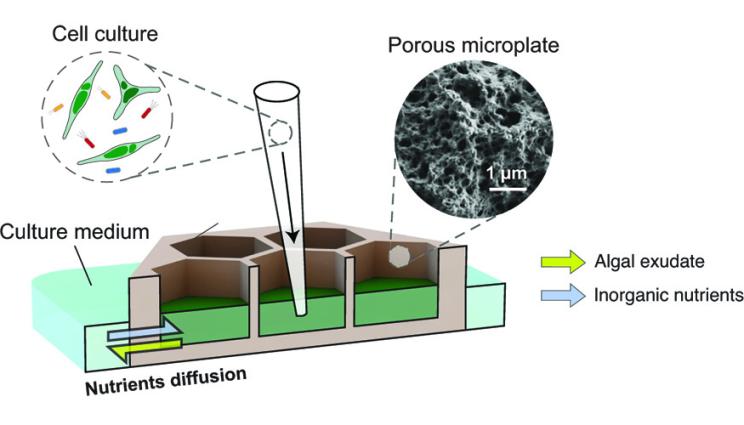 A schematic diagram showing the concept of a porous microplate, where microalgae and bacteria can be cultured in wells at different distances from one another and can exchange nutrients and metabolites without physical contact. Image courtesy of Hyungseok Kim/Massachusetts Institute of Technology.

In the neighborhood of microalgae, location is key to bacterial carbon use

Microscopic algae are responsible for half of the global atmospheric carbon fixed from the atmosphere through photosynthesis, and may be used as a sustainable bioenergy source.

The water immediately outside their cells, called the “phycosphere,” is rich with algal-excreted organic carbon, and is an ideal ecosystem for bacterial growth. However, detecting and measuring bacterial cell activity and population growth in the phycosphere has been difficult, because it has not been possible to track single bacteria and their locations in relation to algal cells over the course of an algal population growth cycle.

“This design enabled the stretching out of the phycosphere in both space and time, which made it possible to quantify bacterial growth and community structure changes at different distances from the algal cells,” said Xavier Mayali, LLNL scientist and co-author of a paper appearing in the International Society of Microbial Ecology Journal (ISME J).

The team showed that algal-associated bacteria grew faster when placed closer to the algal culture well, as might be expected in the real phycosphere environment.

After sequencing the algal microbiome DNA cultured in the microplate, the team revealed that certain bacteria responded to the algal production of organic carbon in a spatially dependent manner, with some bacteria adapted to living close to the algal cells and others adapted to living further away. This is analogous to buying an expensive house close to the supermarket so getting food is easier, versus buying a cheaper house further away. This concept has important implications to understanding how microbes process organic carbon in aquatic environments, which controls whether carbon is sequestered or respired back into the atmosphere as CO2.

An additional and unexpected result is that cultivation of the diatom Phaeodactylum in the microplate led to yields 20 times greater than batch cultures due to continuous supplementation of nutrients through the hydrogel. This finding may have a fundamental impact on efforts for increased and more efficient algal biomass production at large scales.

“The system shows that the algal phycosphere is a complex ecosystem, which allows multiple microbial groups to thrive in different locations within this microscale environment,” Mayali said.

Other LLNL contributors include Jeffrey Kimbrel and Jessica Wollard as well as researchers from the Massachusetts Institute of Technology.

The work was funded by the Department of Energy’s Genome Sciences Program and the Kwanjeong Educational Foundation.