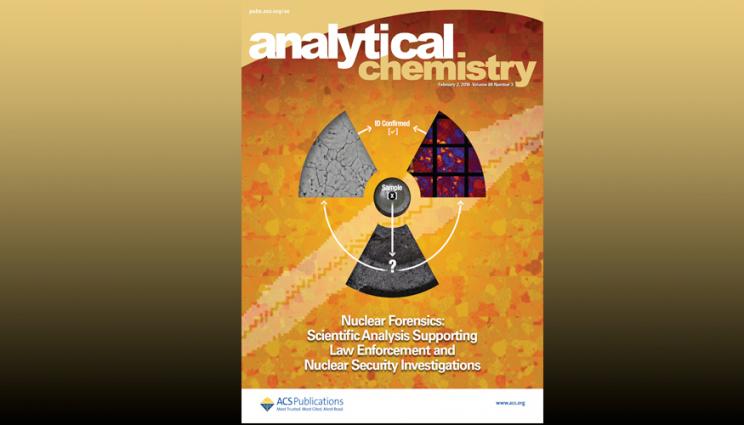 Two Laboratory scientists authored an overview of nuclear forensics that is featured as the cover story for the Feb. 2 edition of Analytical Chemistry magazine

Need to know more about nuclear forensics? Lab's analytical chemists have it covered

Two Laboratory scientists have teamed with Australian colleagues to author an overview of nuclear forensics that is featured as the cover story for the Feb. 2 edition of Analytical Chemistry magazine.

In their feature article, the LLNL and Australian researchers provide an overview of nuclear forensics, including examples of key nuclear forensic signatures that have allowed investigators to elucidate the history of unknown nuclear material.

Their article highlights a pair of cases, in which the capture of highly enriched uranium specimens by law enforcement officials in two countries and the subsequent analysis of the material by scientists, established a link between the cases.

In the first instance, an internationally well-publicized case that occurred at a Bulgarian border crossing in May 1999, a male driver returning to Moldova from Istanbul, Turkey was stopped by Bulgarian customs officers.

During a search of his car, the officers found a certificate of analysis with "U235" displayed prominently in the text. Later, the officers discovered a cylindrical lead container – and inside it, a glass ampoule containing 4 grams of a fine black powder – hidden inside an air compressor. The powder was analyzed by the Bulgarian Academy of Science and LLNL scientists and found to contain highly enriched uranium (HEU).

The second capture occurred more than two years later, in July 2001, when French security services learned that an individual was apparently trying to sell HEU in Paris, claiming that 30 kilograms would be available within a few days.

After searches of the suspect’s apartment and garage did not detect any radioactive materials, the French security forces learned of a possible meeting at Place de la Nation in Paris, prompting another search.

This time a cylindrical lead container was found in the suspect’s vehicle, and within the container was a glass ampoule containing 500 milligrams of a fine black powder. The sample was analyzed by the Commissariat a L’Energie Atomique (CEA).

While the samples may well have a similar origin, other information studied by the LLNL and Australian researchers, most importantly the differing ages of the two materials, showed that the powders were probably not from the same batch.

The International Atomic Energy Agency’s Incident and Trafficking Database (ITDB) is maintained as a record of incidents in which nuclear and other radioactive material outside of regulatory control is reported by participating states.

According to the ITDB, in the period from 1993-2013, 16 confirmed incidents involved the unauthorized possession of HEU or plutonium.

The authors noted that in nuclear forensics, the term "signatures" describes "material characteristics such as isotopic abundances, elemental concentrations, physical and chemical forms and physical dimensions that may be used to link a material, either nuclear or other radioactive (non-nuclear, such as those used for medical imaging), to individuals, locations or processes."

As there is not currently any single nuclear forensic signature able to identify all unknown nuclear materials for nuclear forensic purposes, multiple types of information need to be gathered through the use of multiple analytical techniques, the authors said.

The ANSTO researchers who co-wrote the cover feature article with Livermore scientists are Elizabeth Keegan, Kaitlyn Toole and Emma Young.

Listen to a podcast interview of Kristo.