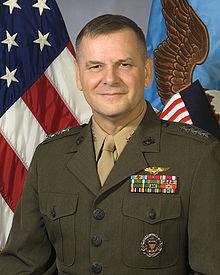 The need for improvements in cyber warfare

In a frank and often-critical overview, Gen. James Cartwright (retired) described how and why the United States needs to improve its planning for cyber warfare.

Cartwright headed the U.S. Strategic Command (Stratcom) from 2004 until 2007, when he was appointed vice-chairman of the Joint Chiefs of Staff, becoming the nation's second-highest military officer. He strongly believes in the value of cyber as a military weapon. When he took over Stratcom, he ordered a full review of all weapons that work at the speed of light.

"I'll accept a couple that are any place on the face of the earth in an hour," he recalls having said. "Hypersonic was as slow as I wanted to deal with. Anything below that was mildly interesting, but at the strategic level it was just not where we wanted to be. So cyber, like directed energy, gave me speed of light capabilities."

In Cartwright's opinion, "Cyber is fire. If you treat it any other way it will not be usable by the military. It has to be integrated by the tactical commander into his scheme of maneuver and into his objectives. It cannot be done by a strategic force sitting somewhere else on the globe, saying, 'I'll schedule this event at a certain time.' That is science. That is not the art of war."

And that's where he finds a major problem. "We've got to keep sight of the fact that this is for fires and has to be integrated at the tactical and operational level of war. There is a place for strategic fires. But the bulk of the work needs to be done at the tactical level. And right now, we're not embracing that and moving toward that."

The recent Arab Spring provided much forensic evidence that cyber could be quite effective as a revolutionary tool. Dissidents used social media to express their concerns, recruit followers, and then to coordinate their activities. They were able to cross cultural boundaries, such as religion and economic status.

Cartwright described an experiment he oversaw in Afghanistan, to promote communication between the various tribes that have historically been separated by impassible mountains. U.S. troops installed a 4G cellular network, then distributed about 1,000 iPhones among three tribes, to see how long it would take before the technology took hold. Experts had predicted at least 2-to-5 years.

But Cartwright had a faster way. "We took American Idol and turned it into Afghan Idol," he recalls. "In three months, all of those phones were being used to their full capacity. The conversations were clearly moving across cultural boundaries that had heretofore not. And it will change that culture long after our military is out of there. The I.T. world will change what those people think of the world and how they interact more than the war ever dreamed of doing."

Cartwright is concerned that the U.S. has not yet fully decided on a policy regarding cyber secrecy. He believes it's best to widely disclose the arsenal of cyber weapons available to the military because it can act as a deterrent.

"You lose the ability to deter if you don't demonstrate that you have these kinds of capabilities, that it has an oversight construct, it has been vetted, you exercise it, you know how to use it, it's part of your fires, and the lieutenants and the captains know how to integrate it because they are totally familiar with it."

He compared the deterrent factor in cyber to the concept of the Cold War's doctrine of mutually assured destruction, in which both sides knew and feared the other's capabilities.

The argument for secrecy in the cyber arena is, in his opinion "kind of crazy. This Lab ought to understand that very clearly in that other domain."