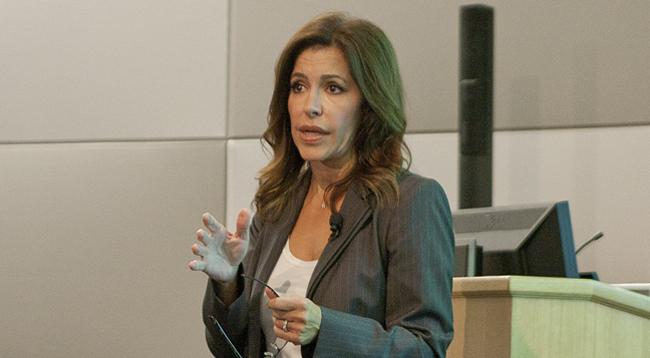 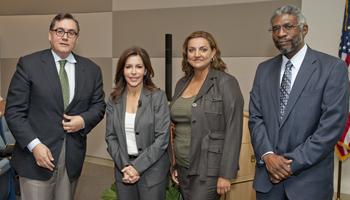 Award-winning journalist Jessica Aguirre has covered hurricanes, man-made catastrophes, race riots in Miami and prison riots in Atlanta and Louisiana. But perhaps no story moves her more than the need for stronger educational programs in California -- especially for Latino students.

Tomas Diaz De La Rubia, deputy director for Science and Technology, speaking both in Spanish and English, introduced Aguirre and welcomed her to the Lab.

With a journalistic background that spans some 27 years, Aguirre talked briefly about her investigative assignments on topics like crime and the sex trade, including work with "American's Most Wanted" host John Walsh.

Today, she is more often referred to as an "education advocate" -- a term she finds puzzling. "How can anyone not be an advocate of education?" she asks.

Aguirre, who lives in the East Bay with her husband and two daughters, currently hosts NBC's "Class Action," a television program that brings together educators, policy makers and citizens to explore solutions to the problems facing California's public schools.

Born to immigrant parents and raised in Miami, Aguirre has a special interest in raising the learning success level of Latinos and is herself an active volunteer at her children's schools.

During a viewgraph presentation, she showed some disappointing statistics about the problem, and probable causes for the gap in Latino achievement, as well as offering some possible solutions.

California statistics show that 1.6 million students (one in four) do not speak English; California educates one-third of all English as a second language (ESL) students in the nation; and 85 percent of California's ESL students are Spanish-speaking.

Latinos are now the majority of all students in California schools, yet they are least likely to graduate high school or attain college degrees. Studies from 2007 indicate that only 12 percent of Latinos possessed college degrees, compared to some 37 percent whites and 58 percent Asians.

Citing poverty, poor well being and lack of proper nutrition, along with a lack of medical attention, mobility and unsupportive schools as reasons why Latino students do not succeed, Aguirre added that about 70 percent of California's children don't attend preschool. Latino students enter kindergarten far below their white and Asian peers, in terms of school readiness.

She also explained that there are cultural reasons for the problem -- educators' expectations are low for Latinos. "As a culture, why is it we're sending a message that it is okay (not to succeed)?" she asked.

In the Silicon Valley school district where only one-third of Latino students are reading at the 3rd grade level and performing at the 8th grade math level, several initiatives are under way through the district's education foundation. Aguirre discussed briefly the four programs: STEM (Science Technology, Engineering and Math) Education; Stepping Up To Algebra; Stepping Up To Science; and a College Guide.

"How do we take this model and move it to other districts?" she asked.

Attributing her own success to "a vision, a path and hard work," she called on Lab employees to work together and serve as role models. "We're the ones who have to be out there," she said.

Aguirre's belief that all children can learn and her desire to see young people live fulfilling lives serves as strong motivation of her passion for education.

The presentation was sponsored by Amigos Unidos Hispanic Employee Association and the Office of Strategic Diversity Programs.