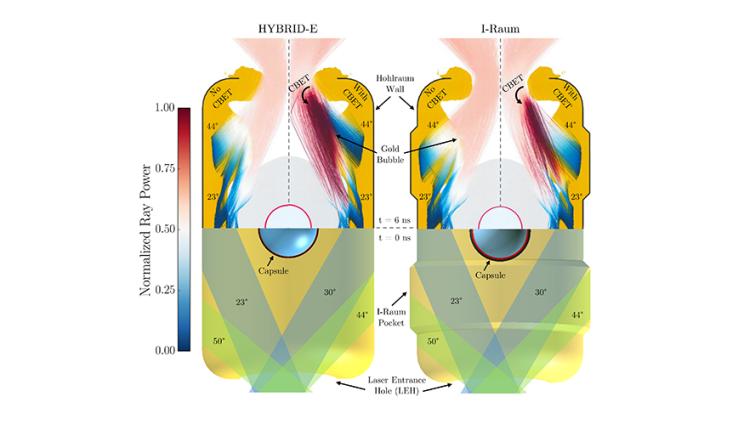 Illustration of the two inertial confinement fusion (ICF) designs reaching the burning plasma regime, as published in a recent article in Nature. The HYBRID-E cylinder, at left, effectively leveraged cross-beam energy transfer (CBET) to control implosion symmetry as the capsule containing fusion fuel grew larger relative to the size of the enclosing radiation cavity, or hohlraum. The I-Raum shaped hohlraum, at right, adds “pockets” to displace the wall (and the material blowoff that obstructs laser beam propagation) away from the capsule, controlling implosion symmetry through a combination of geometry and CBET.

One of the last remaining milestones in fusion research before attaining ignition and self-sustaining energy production is creating a burning plasma. In this state, the fusion reactions themselves become the dominant source of heating in the plasma, but do not yet overcome all mechanisms of energy loss.

The work, which focuses on the designs that led to these results, is featured in the Jan. 26 issue of Nature titled “Design of inertial fusion implosions reaching the burning plasma regime,” with LLNL physicists Annie Kritcher and Chris Young serving as lead authors.

“In these experiments we achieved, for the first time in any fusion research facility, a burning plasma state where more fusion energy is emitted from the fuel than was required to initiate the fusion reactions, or the amount of work done on the fuel,” Kritcher said.

This was achieved through an energy feedback process called self-heating, where the fusion plasma heats itself. When the energy from self-heating is dominant over the energy that was injected to initiate the fusion reactions, the plasma enters a burning plasma state. Creating this new regime in a controlled laboratory setting is of great scientific importance for fundamental fusion research as well as supporting the National Nuclear Security Administration’s science-based Stockpile Stewardship program. This work also was the basis for the recent monumental success of NIF in achieving 1.35 MJ in the laboratory for the first time. This accomplishment also validates the work done decades ago to establish the power and energy specifications for NIF.

The work outlined in the paper presents the inertial confinement fusion (ICF) designs that enabled the achievement of laboratory burning plasma by developing more efficient ways to drive larger-scale fusion targets to the same extreme conditions required for significant fusion to occur, and within the current experimental confines of NIF. By increasing the scale while maintaining high levels of plasma pressure, the team was able to ultimately deliver more of the initial laser energy directly to the fusion plasma and jump-start the burn process. In doing so, the team found novel ways to control the implosion symmetry (by transferring energy between laser beams in a new way and also by changing the target geometry). The designs were generated and optimized using a combination of theory, computational modeling (HYDRA) and semi-empirical models informed by experimental data.

“We learned where we could and could not trust the modeling and when to rely on semi-empirical models,” Kritcher said. “We also found that keeping the driver pressure up longer (i.e. a longer laser pulse) relative to the time it takes the target to ‘implode’ was important for maintaining a high plasma pressure. Without this pressure, and enough energy coupled to the hot dense plasma, we would not reach the extreme conditions required for significant fusion.”

The design work supporting these ICF platforms began several years ago. The teams first recognized technical issues limiting performance, explored many different options to solve these technical problems, presented choices to the broader team and down-selected. Designs were updated continuously with data from tuning experiments and ultimately put to the test in high-performance experiments with fusion fuel.

These designs are typically generated by a lead designer with input from the broader interdisciplinary team including designers, experimentalists, theorists and facility experts (laser and target). Each new iteration builds upon decades of previous work, solving an existing problem or incorporating a new idea that advances fusion performance to a new level. Through the design changes outlined in the paper, researchers were able to increase the size of the target and still maintain the same levels of extreme plasma pressure that were achieved at smaller scale, all while operating at the maximum available NIF energy.

“There is much work yet to be done and this is a very exciting time for fusion research,” Kritcher said. “Following this work, the team further improved hohlraum efficiency in both platforms, increasing hot spot pressure which resulted in higher performance and the record 1.35 MJ HYBRID-E experiment.”

Kritcher explains that this new platform is now the “basecamp” for a significant fraction of ongoing programmatic work, focusing on understanding the sensitivity of this new regime, improving robustness of the platform, and further increasing the energy and pressure of the fusion hot spot. “This will be explored through a variety of ideas to increase fuel compression and energy coupling,” she said.