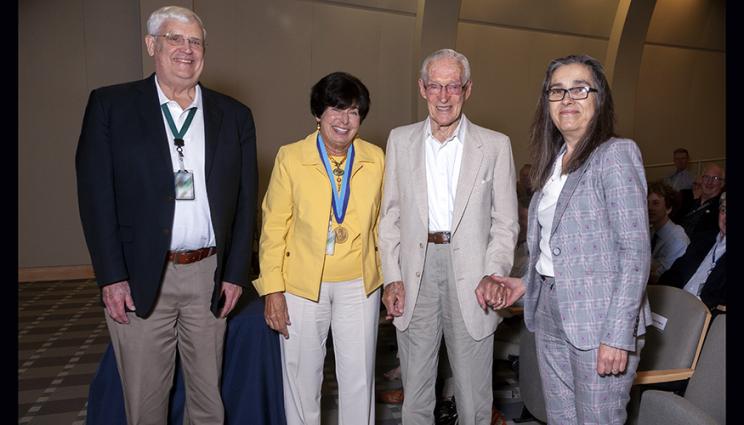 John, vice president emerita of Sandia National Laboratories, became the first woman awarded the prestigious medal in its seven-year history, which has been handed out annually since 2015 in recognition of exceptional leadership in scientific, technical and engineering development and policy formulation in support of U.S. nuclear security.

With a host of former Lab directors, National Nuclear Security Administration and Livermore Field Office officials and other dignitaries looking on, John provided much of her remarks in poetic form. She thanked her personal and professional influences, including Foster, whom she first met when she joined the Department of Defense’s (DOD) Defense Science Board in 1996.

John said it was “extra special” to receive the award from Foster, mere days before the medal’s namesake celebrates his 100th birthday on Sept. 18. Foster presented John with the medal along with the 2021 honoree, former LLNL Director George Miller.

“Could anything be better than to join this award roster, (and) to be placed in the company of this man, Johnny Foster,” John said.

During the ceremony, John’s former supervisors and colleagues lauded her decades of service in national security, including as vice president of Sandia's California Division, and her expertise in a vast range of national security-related fields, such as nuclear weapons, non-proliferation and chemical and biological defense.

NNSA Administrator Hruby started working with John at Sandia California in 1983 when John was supervisor for a thermal and fluid mechanical analysis group. The two later partnered after Sept. 11, 2001, when John was chosen to lead the laboratory’s Homeland Security Strategic Management Unit.

Hruby said she admired John for asking “probing questions,” creating a “tight bond between the [Sandia and LLNL] labs,” instituting hallmarks of Sandia’s Livermore campus — namely systems analysis and bioscience — as well as for her “career No. 2” as a trusted adviser in national security, management and leadership development at LLNL, Sandia, NNSA and elsewhere.

“She’s continued to push things along and fight for what she believes in,” Hruby said. “After all these years and many agreements and disagreements, I’m still learning from Mim … She’s been an incredible role model, a loyal friend and she’s incredibly deserving of this medal.”

In winning the Foster Medal, John joins an exclusive group of honorees that includes former LLNL directors Foster, Miller and John Nuckolls, former U.S. Air Force Chief of Staff Gen. Larry Welch, Stockpile Stewardship Program architect Victor Reis and Linton Brooks, ambassador for arms control and former NNSA administrator. No medal was given out in 2020 due to the COVID-19 pandemic.

LLNL Director Kim Budil hosted the event, thanking John for being among her female role models while rising through the ranks in the national security community and for continuing to provide guidance to LLNL, Sandia California and the Lawrence Livermore National Security (LLNS) Board of Governors as a committee member, consultant and mentor.

“Mim has been an extraordinary influence on me,” Budil said. “Your commitment to public service, your commitment to really hard, and sometimes very arcane, questions that really matter, your willingness to teach us everything from the ins and outs of biosecurity or national command structure, to where to find the best clothes in Washington D.C. — thank you for all that you have done and continue to do, and I look forward to having many more years of service here.”

Gold, who hired John at Sandia, credited her for her ability to lead on critical national security issues, her “passion for making a difference, and tenacity for following through.” Lehman called John a “purveyor of wisdom and strategy,” while Fields remarked on John’s agility, relentlessness and willingness to “ask questions that nobody else asks.”

Woodard, who worked with John for about 30 years at Sandia, remarked on the honoree’s courageous leadership, particularly in establishing Sandia’s bioscience program, as well as her commitment to diversity and inclusion, leadership training and mentorship of younger scientists and for helping Sandia forge strong connections to the national security community.

“As a result of Mim’s commitment, the California lab truly moved to a level of carrying much more than its own weight in terms of respect, influence and impact,” Woodard said.

Welch said the honor, combined with the Eugene G. Fubini Award John earned from DoD for her advisory service to the agency, was a “confirmation of the respect” for her work from senior management at both DoD and DOE. He praised John for her ability to manage many personalities with strong opinions to reach conclusions on critical national security matters.

“Bringing that kind of group together to provide the kind of result you want is a very special kind of leadership, and I don’t see that very often; I’ve seen it for years with Mim,” Welch said. “She is attracted to hard problems, and she succeeds at addressing hard problems.”

John, who has a Ph.D. in chemical engineering from Princeton University, began her career at Sandia California in 1978, where she later became director of the Lab’s Center for Exploratory Systems and Development and senior manager for Systems Analysis and Assessment. She served as Sandia California’s vice president from 1999 to 2006, where she was responsible for all site activities, led Sandia’s engagement with LLNL and was a member of Sandia’s senior management team with special responsibilities in the nuclear weapons and homeland security areas.

During her tenure at Sandia’s Livermore campus, she collaborated with LLNL on many projects, including the Strategic Defense Initiative in the 1980s — where she helped lead systems analysis efforts on many directed energy concepts — and worked with LLNL design teams as manager of the W89/SRAM II Test and Evaluation program in the early 1990s. The collaboration with LLNL continued as director of a DOE chem/bio defense program, which led to the establishment of a bioscience program at Sandia tasked with ensuring reliability for Sandia components of LLNL systems and deterrence assessment studies.

In addition, John has served as adviser to numerous organizations within the national security community, including the Threat Reduction Advisory Committee, the National Academies Intelligence Community Studies Board and the Intelligence Science and Technology Experts Group. She contributes to a wide range of nuclear issues, including nuclear survivability, proliferation monitoring, command and control and the health and evolution of the nuclear bomber leg of the Triad. Other areas of expertise include remote sensing, micro-technologies, systems analysis and engineering, naval operations and analysis, homeland defense and critical infrastructure and command and control. John also earned the Navy’s Superior Public Service Award in recognition of her leadership and studies for the Academies’ Naval Studies Board.

The Foster Medal ceremony was immediately followed by a reception, where attendees celebrated Foster’s 100th birthday with cake and brief remarks by Budil and Foster. At a subsequent luncheon, John gifted her honorarium check to the Livermore Lab Foundation to start a fellowship in Foster’s name.

“It’s taken me a while to get used to the fact that I’m in such amazing company with people like Johnny and previous recipients,” John said. “I’m the luckiest person in the universe right now. It’s amazing already, but then to combine it with Johnny’s centennial and him be able to show up and take such an active part of the event, it couldn’t be more special.”