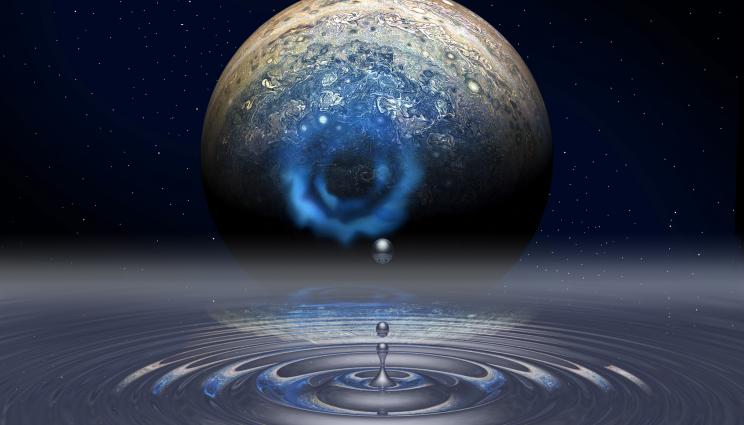 Swirling dense metallic hydrogen dominates the interiors of Jupiter, Saturn and many extra-solar planets. Building precise models of these giant planets requires an accurate description of the transition of pressurized hydrogen into this metallic substance — a long-standing scientific challenge.

Decades of research have revealed that high temperatures combined with high pressure progressively transform dense fluid hydrogen into an electrically conducting fluid. Surprisingly, computer simulations suggest that below 2,000 Kelvin (K), increasing the pressure could trigger a sudden insulator-to-metal transition. How much pressure is needed has been uncertain because various theoretical models and numerical techniques experiments provide very different predictions.

"Our challenge was to design an experiment that could dynamically compress a sample of fluid hydrogen to several million atmospheres and do it gently enough (without a strong shock) that it remained cool, or below 2,000 K, to see which of the theoretical models was right," said Peter Celliers, a physicist at LLNL and lead author on the paper. "We performed a series of experiments that provide a clear signature of the metallization transition, and from the data we have identified at what conditions in pressure-temperature space the transition is occurring. The results clearly show which models are right, which are not and a couple that are close. Choosing the right model is important for planetary scientists who are trying to predict the internal structure of Jupiter and Saturn."

In addition, understanding the behavior of hydrogen under pressure is an important facet of the National Nuclear Security Administration’s (NNSA) efforts in inertial confinement fusion. Research in the areas of extreme temperatures, pressures and densities also contributes to NNSA’s Stockpile Stewardship Program that helps ensure the current and future nuclear stockpile is safe and reliable.

A series of five experiments was conducted at the National Ignition Facility (NIF), the world’s largest and most energetic laser. First, the researchers condensed a thin layer of cryogenic liquid deuterium (a heavy isotope of hydrogen) by cooling to 21 K (-422 degrees Fahrenheit). They created a sequence of reverberating shockwaves using 168 of NIF’s laser beams, compressing the deuterium fluid to 600 GPa (six million atmospheres, nearly twice the pressure at the center of the Earth) while keeping the temperature between 1,000 K and 2,000 K.

The sample started completely transparent, but as the pressure rose, it became opaque before transforming into a shiny metal whose high optical reflectivity is a signature for high electrical conductivity. An optical diagnostic instrument, VISAR, recorded the reflectivity of the sample and the Doppler shift in the reflected light beam to determine the pressure in the sample. 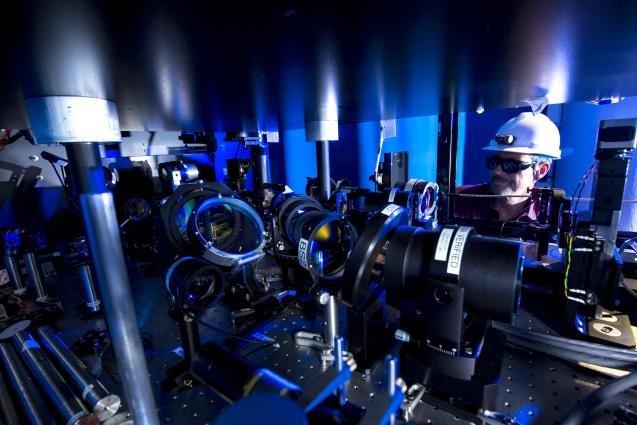 "It’s like squeezing air and turning it into a shiny, light version of liquid mercury. Although exotic at Earth’s surface, metallic hydrogen is the main material inside most giant planets and stars," said Raymond Jeanloz, professor of astronomy and earth and planetary science at the University of California, Berkeley and a co-author on the publication.

According to Celliers, the final results are a determination of the pressure and temperature at which the metallization occurs to compare with theoretical models. "From careful examination of the signals, we also learned new information about the refractive index and the absorption coefficient in the sample," he said.

"These results are a true experimental tour de force and are particularly important because they provide a very stringent test on the different varieties of numerical simulations that one can use to predict the properties of planetary constituents at high pressure -- necessary to model the internal structure and evolutionary processes of Jupiter and Saturn," said Marius Millot, physicist at LLNL and co-author of the paper. "Now, thanks to the excellent performance and reproducibility of NIF and exquisite quality of data, our results bring new insight and verify predictions."

The research was conducted as part of NIF’s Discovery Science Program, which allocates experimental time to researchers conducting breakthrough experiments in a variety of fields. This collaboration has been awarded additional time and is in the process of planning new experiments. Looking ahead, they hope to detect new exotic stages of hydrogen by pushing into higher pressures while maintaining lower temperatures.

"Because it is made of just one electron and one proton, understanding how the properties of hydrogen are modified by applying high pressures, which brings the atoms closer and closer from each other, is a great playground for condensed matter theoreticians," Millot said. "Hydrogen at high pressures and temperatures is the main constituent of gas giant planets and stars, so it is obviously important to study its properties if we want to understand where we come from, how the solar system was formed and evolved, etc. For example, because fluid convection of metallic hydrogen generates the magnetic field of these planets, our data will be helpful in interpreting the amazing data collected by the Juno and Cassini missions."

This research was supported in part by the Laboratory Directed Research and Development program and the NIF team.