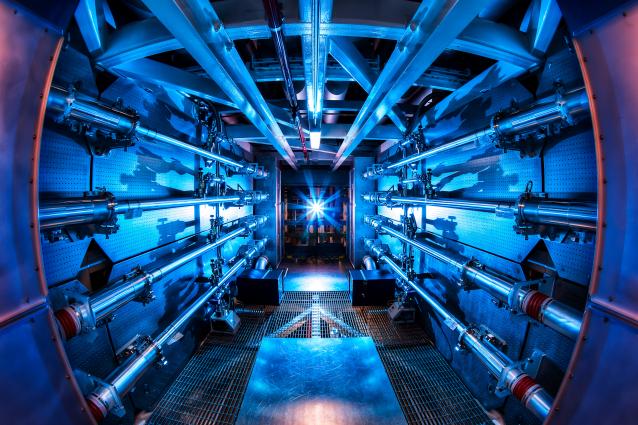 The preamplifiers of the National Ignition Facility are the first step in increasing the energy of laser beams as they make their way toward the target chamber. NIF recently achieved a 500 terawatt shot - 1,000 times more power than the United States uses at any instant in time. Photo credits: Damien Jemison/LLNL 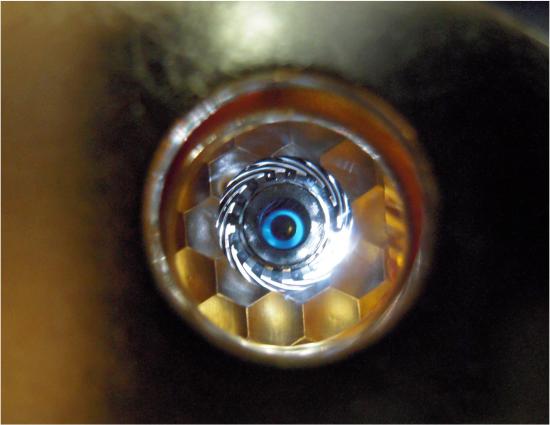 A view of a cryogenically cooled NIF target as "seen" by the laser through the hohlraum's laser entrance hole. In ignition experiments, the hydrogen in the fuel capsule must be compressed to about 100 times the density of lead.

LIVERMORE, CA. - Fifteen years of work by the Lawrence Livermore National Laboratory's National Ignition Facility (NIF) team paid off on July 5 with a historic record-breaking laser shot. The NIF laser system of 192 beams delivered more than 500 trillion watts (terawatts or TW) of peak power and 1.85 megajoules (MJ) of ultraviolet laser light to its target. Five hundred terawatts is 1,000 times more power than the United States uses at any instant in time, and 1.85 megajoules of energy is about 100 times what any other laser regularly produces today.

The shot validated NIF's most challenging laser performance specifications set in the late 1990s when scientists were planning the world's most energetic laser facility. Combining extreme levels of energy and peak power on a target in the NIF is a critical requirement for achieving one of physics' grand challenges -- igniting hydrogen fusion fuel in the laboratory and producing more energy than that supplied to the target.

In the historic test, NIF's 192 lasers fired within a few trillionths of a second of each other onto a 2-millimeter-diameter target. The total energy matched the amount requested by shot managers to within better than 1 percent. Additionally, the beam-to-beam uniformity was within 1 percent, making NIF not only the highest energy laser of its kind but the most precise and reproducible. "NIF is becoming everything scientists planned when it was conceived over two decades ago," NIF Director Edward Moses said. "It is fully operational, and scientists are taking important steps toward achieving ignition and providing experimental access to user communities for national security, basic science and the quest for clean fusion energy."
The user community agrees. "The 500 TW shot is an extraordinary accomplishment by the NIF Team, creating unprecedented conditions in the laboratory that hitherto only existed deep in stellar interiors," said Dr. Richard Petrasso, senior research scientist and division head of high energy density physics at the Massachusetts Institute of Technology. "For scientists across the nation and the world who, like ourselves, are actively pursuing fundamental science under extreme conditions and the goal of laboratory fusion ignition, this is a remarkable and exciting achievement."

"Already the most incredibly tightly controlled and most energetic laser in the world, it is remarkable that NIF has achieved the 500 TW milestone - quite a significant achievement," said Dr. Raymond Jeanloz, professor of astronomy and earth and planetary science at the University of California, Berkeley. "This breakthrough will give us incredible new opportunities in studying materials at extreme conditions."

NIF is operating routinely at unprecedented performance levels. The July 5 shot was the third experiment in which total energy exceeded 1.8 MJ on the target. On July 3 scientists achieved the highest energy laser shot ever fired, with more than 1.89 MJ delivered to the target at a peak power of 423 TW. A shot on March 15 set the stage for the July 5 experiment by delivering 1.8 MJ for the first time with a peak power of 411 TW.

Original concerns about achieving these levels of extreme laser performance on NIF centered in part on the quality of optics existing in the late 1990s that could not withstand this intense laser light. Lawrence Livermore researchers worked closely with their industrial partners to improve manufacturing methods and drastically reduce the number of defects. Livermore scientists also developed in-house procedures to remove and mitigate small amounts of damage resulting from repeated laser firings.

NIF is influencing the design of new giant laser facilities being built or planned in the United Kingdom, France, Russia, Japan and China.

Located at Lawrence Livermore National Laboratory, NIF is funded by the National Nuclear Security Administration (NNSA), a semi-autonomous agency within the U.S. Department of Energy responsible for enhancing national security through the application of nuclear science to the nation's national security enterprise.

NIF is the latest, and arguably the most sophisticated, addition to a number of critical stockpile stewardship facilities. It is the only facility with the potential to duplicate the actual phenomena that occur in the heart of a modern nuclear device -- a goal that is critical to sustaining confidence that a return to underground nuclear testing remains unnecessary. NIF also is providing unique experimental opportunities for scientists to enhance our understanding of the universe by creating the same extreme states of matter that exist in the centers of planets, stars and other celestial objects. Additionally, experiments at NIF are laying the groundwork to revolutionize energy production with fusion energy to provide abundant and sustainable clean energy.