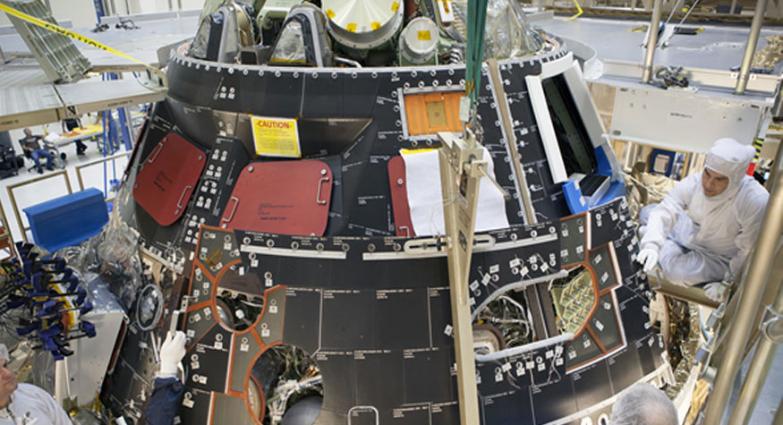 Technicians install a protective shell onto the Orion crew module for its first test flight this December.

Researchers in Lawrence Livermore National Laboratory's NIF & Photon Science Directorate are working with NASA Ames Research Center at Moffet Field, California on the development of technology to simulate re-entry effects on the heat shield for the Orion spacecraft, NASA's next crewed spaceship. Orion is designed to carry astronauts beyond low Earth orbit to deep-space destinations such as an asteroid and, eventually, Mars.

The Orion heat shield will have to withstand re-entry temperatures that are too severe for existing reusable thermal protection systems, such as those used on the space shuttles. NASA's development and characterization of a more robust shield requires that radiant heating capability be added to the Arc Jet Complex at NASA Ames, which develops thermal protection materials and systems in support of the Orion Program Office at NASA Johnson Space Center in Houston and the NASA Human Exploration and Operations Mission Directorate at NASA headquarters in Washington, DC.

NASA Ames currently owns two 50 kilowatt (kW) commercial fiber laser systems and needs to augment the optical power into the Arc Jet chamber by another 100 to 200 kW. The team at Ames recently approached LLNL to explore an option of using commercially available radiance-conditioned laser diode arrays for this task, similar to the diodes used in the Laboratory's Diode-Pumped Alkali Laser (DPAL) and E-23/HAPLS laser projects. Their aim is to assess whether such systems can better meet the technical objectives for survival testing. If successful, such diode arrays would offer a dramatically lower-cost solution.

To perform these tests, LLNL is collaborating with Ames on diode array characterizations using an existing diode system developed for LLNL's laser programs. These tests will allow NASA Ames to assess whether their optical output can meet in-chamber target illumination requirements, and thus inform their choice for a future system.

While the space shuttles traveled at 17,000 miles per hour, Orion will be re-entering Earth's atmosphere at 20,000 miles per hour on its first flight test in December. The faster a spacecraft travels through the atmosphere, the more heat it generates. The hottest the space shuttle tiles got was about 2,300 degrees Fahrenheit; the Orion back shell could get as hot as 4,000 degrees. For more about Orion, see the NASA video.