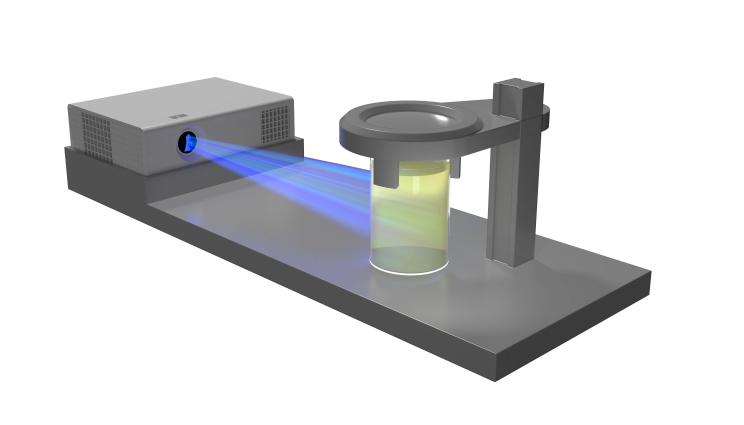 Nicknamed “The Replicator,” the breakthrough volumetric additive manufacturing technology co-developed by Lawrence Livermore National Laboratory and the University of California, Berkeley takes computed tomography (CT) “views” of 3D objects from multiple angles, and projects these images into a photosensitive resin. The resin cures at points where the accumulated, absorbed light energy exceeds the gel thresholds, and when the remaining liquid resin is drained, it produces 3D objects within seconds or minutes, much faster than traditional layer-by-layer 3D printing techniques. Illustration by Jake Long/TID.

The award, one of eight projects selected by NASA’s In Space Production Applications (InSPA) program, will allow LLNL and Kentucky-based space life sciences company Space Tango to mature prototypes of the “replicator” technology — a ultrafast 3D printer co-developed by LLNL and the University of California, Berkeley — for bioprinting in microgravity on the International Space Station (ISS). The VAM printers are be expected to operate with little to no crew intervention.

The breakthrough VAM technology takes computed tomography (CT) “views” of 3D objects from multiple angles, and projects these images into a photosensitive resin. The resin cures at points where the accumulated, absorbed light energy exceeds the gel thresholds, and when the remaining liquid resin is drained, it produces 3D objects within seconds or minutes, much faster than traditional layer-by-layer 3D printing techniques.

“This proposal is significant because it builds on LLNL’s internal investments in this area over the last few years,” said LLNL principal investigator Maxim Shusteff. “Space Tango’s participation highlights the promise of the VAM technology, and connects us with the commercial spaceflight industry. In addition, space-based manufacturing has been of interest for several years for the LLNL 3D printing community — and for me personally — so starting to build a program in this direction is tremendously exciting.”

LLNL’s partner in the endeavor, Space Tango, has years of experience in developing automated microgravity experiments in the pursuit of manufacturing health and technology solutions in space. Since their first commercial launch in 2017, Space Tango has conducted nearly 200 experiments on the ISS that aim to improve life on Earth.

“Microgravity is a platform for innovation, and it allows us to think creatively about the limitations gravity can have on Earth-based research,” said Space Tango Chief Strategy Officer Alain Berinstain. “With the opportunity to expand on existing bioprinting techniques in a very new way, Space Tango is thrilled to partner with LLNL to potentially discover human health solutions that wouldn’t have been possible on Earth.”

The InSPA awards support NASA’s plans to enable manufacturing “In Space for Earth” on the ISS, to develop new and promising technologies for advanced materials and products for use on Earth, and create a robust economy in low-Earth orbit. Total InSPA funding for the round of eight projects was about $21 million.

Shusteff said VAM is expected to perform particularly well in zero or micro-gravity environments because eliminating gravity, which can cause buoyant settling or convection of the resin when printing on Earth, will create better-precision prints, and allow researchers to focus attention on solving other technical challenges.

Shusteff added that tissue engineering with VAM could be one area where spaceborne production in microgravity may significantly benefit the outcome.

“Cartilage tissue was chosen as a good balance of market need, impact to patients, technical feasibility and our available expertise,” he said.

Through the InSPA program, NASA has provided more than $38 million for more than a dozen technologies intended to enable innovative companies to mature their concepts and stimulate demand for future markets.

The awards are used to raise the technological readiness level of their manufacturing technologies and products of U.S. businesses, institutions of higher learning and other organizations, move them to market and propel U.S. industry toward developing a sustainable, scalable and profitable non-NASA demand for products and services in low-Earth orbit.