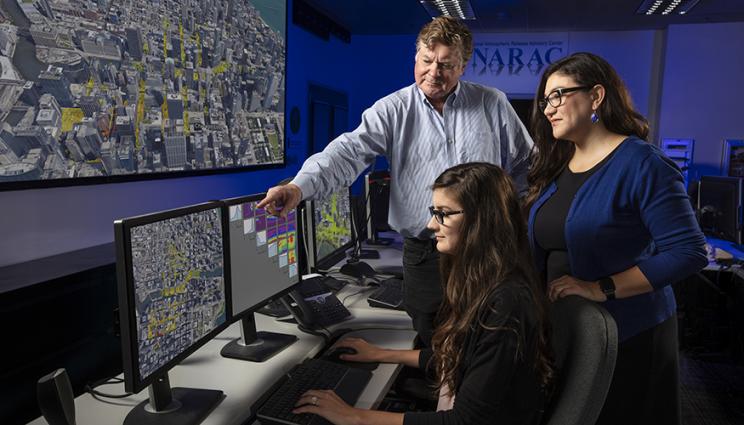 Editor’s note: The following is part of a series of articles looking back at the Lab's response immediately following the Sept. 11 attacks and our contributions since that day 20 years ago.

During an airborne hazard emergency or exercise, a NARAC team will quickly go to work in their operations center. The team uses weather data and an advanced computer modeling system to predict the spread of hazardous material in the atmosphere and estimate the potential health risks. This information helps inform emergency responders and government officials who make the decisions needed to protect people.

“The necessity for NARAC is clearer than ever in a post-9/11 world, where our adversaries seek to use any and all means to harm U.S. citizens, U.S. infrastructure and our international interests,” said Joe Morris, associate program leader for Nuclear Effects R&D.

NARAC started as an Atomic Energy Commission (AEC) feasibility study in 1973. The center was the brainchild of visionaries at LLNL and the Department of Energy (DOE, formerly part of AEC) who in the 1970s recognized that there was a need to understand and predict the movement and health impacts of airborne hazards.

“It was clear that this was a problem that only a national laboratory could help solve by applying multidisciplinary science and the Livermore supercomputers of the time,” Morris said.

In the wake of 9/11, the newly founded Department of Homeland Security led the creation of the Interagency Modeling and Atmospheric Assessment Center (IMAAC) to enable coordination of plume modeling between federal agencies, with DOE and NARAC designated as the primary provider of radiological and nuclear plume modeling capabilities for IMAAC. Livermore developed new web-based software to provide much easier access to NARAC modeling tools and products, which facilitated a rapid growth in the use of NARAC by different government agencies. The tools also provide a method to quickly distribute NARAC and IMAAC products to emergency response organizations through a NARAC-hosted website.

“As it had done since its inception, the center continued to provide detailed pre-incident analyses of the potential airborne impacts from different terrorist and accident scenarios,” said Lee Glascoe, LLNL program leader for the Nuclear Emergency Support Team. “These analyses were used to help the nation, as well as individual facilities, develop emergency plans and prepare for threats.”

On March 11, 2011, DOE activated NARAC after the earthquake and tsunami in Japan resulted in severe damage to the Fukushima Dai-ichi nuclear power plant. The center operated 24 hours per day, seven days a week for many weeks, providing hundreds of predictions about radiation levels near the site, nearby communities, the rest of Japan and internationally. NARAC scientists were not only producing a record number of predictions — they also were producing many different types of predictions. NARAC provided analyses of possible worst-case releases of radioactivity from the plant, analyses of past and current releases and hour-by-hour forecasts of atmospheric plume positions for possible new releases.

“These predictions were used to help guide government decisions on actions that might be needed to protect U.S. emergency responders and citizens in Japan,” said Brenda Pobanz, associate program leader for public health and safety and NARAC operations.

Morris said NARAC is undergoing continuous improvements to advance the fidelity and speed of its predictions, as well as considering a wider range of applications. This includes a strong, targeted R&D program that seeks to incorporate emerging capabilities into NARAC.

NARAC is currently leveraging a recently completed Laboratory Directed Research and Development project that used machine learning and measurements of air contamination and atmospheric dispersion modeling to rapidly estimate the location of an anomalous atmospheric release of ruthenium-106 in 2017.

In 2017, NARAC completed work on an operational, fast-running, high-resolution Computational Fluid Dynamics model called Aeolus, sponsored by the Department of Homeland Security. This model can simulate the details of dispersion and deposition of hazardous material around buildings much more quickly than previous models of this type. NARAC uses the Aeolus simulations to determine the airborne spread and deposition onto buildings from hypothetical releases of potentially hazardous material in downtown city locations. Aeolus was used to analyze potential low levels of contamination around buildings at the Department of Energy’s Hanford site to help ensure safe operations.

“In the future, we expect to use higher-performance exascale computing, working closely with colleagues in the LLNL Climate Program,” Morris said. “The center will produce higher-fidelity models that are enabled by an increasing array of higher-resolution data sources, and advances in mathematical and statistical techniques, such as artificial intelligence.”

The center will continue to develop the next generation of operational scientists, software experts and researchers, who will develop and improve advanced training programs to maintain high levels of expertise. NARAC will continue to strive to provide the best support possible to users, sponsors and partners, and to help protect people around the world by providing accurate and easily usable predictions of hazards.

Comprehensive timeline of the history and major contributions of NARAC
NARAC
Background information on NARAC, its history, and R&D areas, is provided by thi…