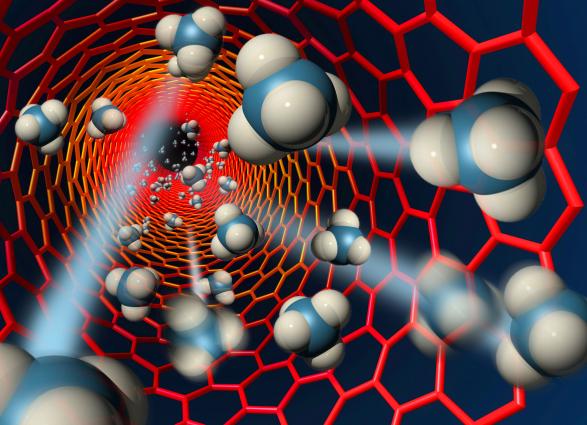 Artist’s rendering of methane molecules flowing through a carbon nanotube less than two nanometers in diameter. to download a high-resolution image.) 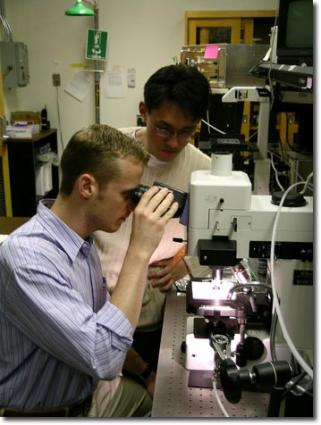 LIVERMORE, Calif. — A nanotube membrane on a silicon chip the size of a quarter may offer a cheaper way to remove salt from water.

Researchers at Lawrence Livermore National Laboratory have created a membrane made of carbon nanotubes and silicon that may offer, among many possible applications, a less expensive desalination.

The nanotubes, special molecules made of carbon atoms in a unique arrangement, are hollow and more than 50,000 times thinner than a human hair. Billions of these tubes act as the pores in the membrane. The super smooth inside of the nanotubes allow liquids and gases to rapidly flow through, while the tiny pore size can block larger molecules. This previously unobserved phenomenon opens a vast array of possible applications.

The team was able to measure flows of liquids and gases by making a membrane on a silicon chip with carbon nanotube pores making up the holes of the membrane. The membrane is created by filling the gaps between aligned carbon nanotubes with a ceramic matrix material. The pores are so small that only six water molecules could fit across their diameter.

“The gas and water flows that we measured are 100 to 10,000 times faster than what classical models predict,” said Olgica Bakajin, the Livermore scientist who led the research. “This is like having a garden hose that can deliver as much water in the same amount of time as a fire hose that is ten times larger.”

Membranes that have carbon nanotubes as pores could be used in desalination and demineralization. Salt removal from water, commonly performed through reverse osmosis, uses less permeable membranes, requires large amounts of pressure and is quite expensive. However, these more permeable nanotube membranes could reduce the energy costs of desalination by up to 75 percent compared to conventional membranes used in reverse osmosis.

Carbon nanotubes are a unique platform for studying molecular transport and nanofluidics. Their nanometer-size, atomically smooth surfaces and similarity to cellular water transport channels make them exceptionally suited for this purpose.

“Since water does not wet the outside surface of carbon nanotubes, we were skeptical that water would enter into them, let alone flow really fast,” Bakajin said. “But the molecular dynamics simulations in the literature predicted fast flow, so we wanted to test the predictions.”

“The first time we set up an experiment with water, we left it overnight thinking that the water level above the membrane would not budge,” Park said. “Instead, we came back in the morning and there was a little puddle on the floor under the membrane.”

Holt added: “The first thing that came to mind was that the membrane broke, but fortunately it didn’t. The membrane allowed water through and blocked gold nanoparticles that were just a bit larger than the nanotube pores.”

Simulations of gas and water transport through carbon nanotubes predict that each should flow rapidly. Gas molecules should bounce off its atomically smooth surface like billiard balls. Water molecules should slide through either because of the “slipperiness” of the carbon nanotube surface or due to molecular ordering induced by spatial confinement. The experiments performed by the LLNL team demonstrated these predicted rapid flows of gas and water through carbon nanotubes, but further research is needed to determine the exact transport mechanisms.

Another potential application for the membranes is in gas separation. The high gas permeability and its affinity to hydrocarbons may allow for lower-energy, industrial-gas separations. “Though our membranes have an order of magnitude smaller pore size, the enhanced flow rate per pore and the high pore density makes them superior in both air and water permeability compared to conventional polycarbonate membranes,” Bakajin said.

The research appears on the cover of the May 19 edition of the journal Science .