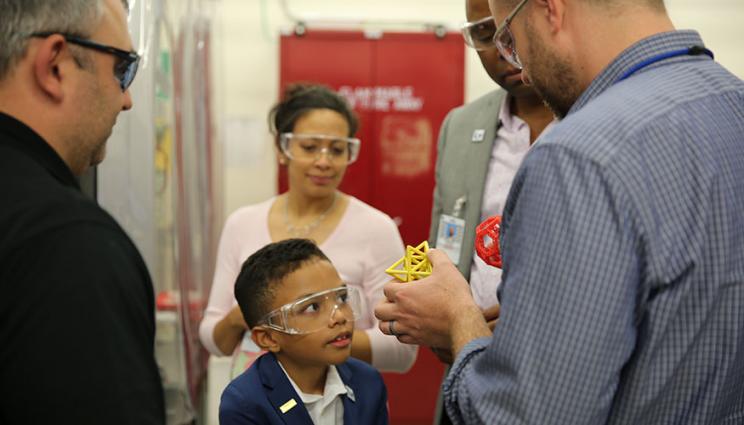 Eight-year-old Romanieo Golphin Jr. came to the Lab last week to visit the National Ignition Facility, discuss the discovery of recent elements added to the periodic table and learn about the use of new materials in additive manufacturing. From left: Additive Manufacturing’s Chris Spadaccini, Romanieo Golphin Jr. and Eric Duoss, along with his parents, in back, Cheri Philip and Romanieo Sr. Photos by Kate Hunts/LLNL

He has been called the next Einstein due to his understanding of particle physics, while his perfect pitch has drawn comparisons to Mozart. He has set a goal of building his own star, which he plans to place somewhere in the Andromeda galaxy. He’s confident he can help NASA with its first manned mission to Mars.

Romanieo Golphin Jr. came to the Lab last week to visit the National Ignition Facility, discuss the discovery of recent elements added to the periodic table and learn about the use of new materials in additive manufacturing. His visit is part of a series of trips to such places as the European Organization for Nuclear Research (CERN) in Switzerland -- where he was named a science ambassador -- the Kennedy Space Center in Florida, the Jet Propulsion Lab in Pasadena and Apple’s new headquarters in Cupertino. 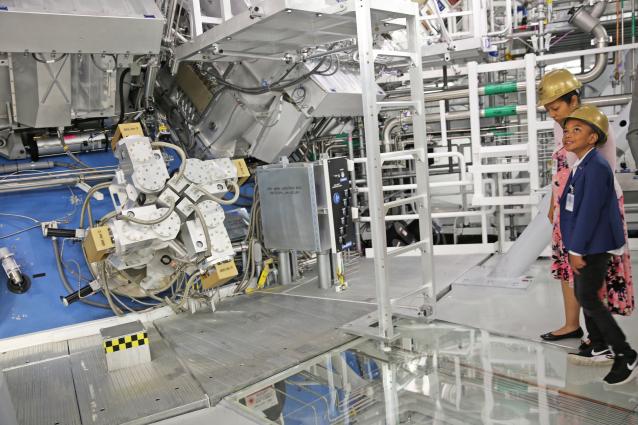 All to expose Romanieo to the possibilities of science and the importance of endless education. Romanieo has been invited to sit in on organic chemistry and physics courses at Morehouse College, chemistry and music at the University of North Carolina and was a major part of an invited talk on early learning given by his parents at Duke University. Each time he wowed the professors with his understanding.

Yet for all his know-how, Romanieo is very much a typical 8-year-old. He is constant motion -- explain to him the concept behind various facets of NIF and he listens while performing the dance of the fidgety child, arms and legs always whirling about. Still, he is able to absorb all that is said to him and lights up when discussion turns to plasmas. As he sits down for lunch he bemoans the presence of mushrooms in his tuna wrap and would much rather have grilled cheese, or better yet, "a lollipop." Yet, as the process to discover new elements is discussed during the meal, he rattles off the names of various elements, much the way other children would discuss their Pokémon. He can recite the position each element occupies on the periodic table, whether it conducts or attracts, the number of protons in the nucleus or any other special property. And when he walks into the additive manufacturing laboratory and sees new materials neatly laid out, his parents can hardly contain him as he eagerly asks which ones he can pick up or whether he can experiment with a glovebox.

Romanieo spent the day touring NIF with Principal Associate Director Jeff Wisoff, physicist Ron Shepherd and engineer Ibo Matthews. He met with Deputy Director Tom Gioconda and discussed elements with Nancy Stoyer. His visit closed with a look at the Lab’s work in new materials, presented by Additive Manufacturing’s Chris Spadaccini, Eric Duoss, Julie Mancini and Congwang Ye, among others. Throughout the day he was asked what he wanted to be when he grew up, hence the answers about creating a star or traveling to Mars. He also wants to learn more about music, how to cook and sketch. 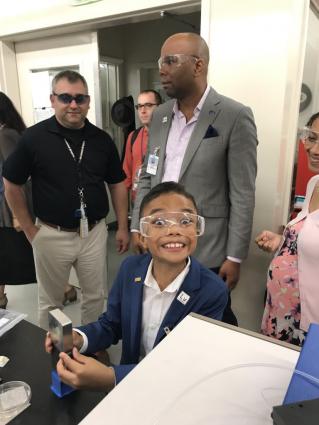 Romanieo is aware he is different from most kids. That may explain why he constantly asks those around him about their scientific know-how -- but not to show off what he knows. His playful nature often comes out in the answers -- when Shepherd tells him his favorite star is Sirius, Romanieo quickly retorts "Are you serious?" pleased by his pun.

Romanieo’s affinity for science began showing at the age of 2. A YouTube video, taken from the family’s Maryland home, features his father asking the boy questions about the properties of hydrogen and helium. Romanieo Jr. answers nonchalantly while spooning up his Cheerios. His parents are lifelong academics -- Romanieo Sr. is an educator, scientist, artist, musician and linguist, while his mother, Cheri Philip, is a psychologist, researcher, educator and author. Together they founded the Robeson Group -- named after civil rights activist, actor and athlete Paul Robeson -- to devise tools and strategies to teach complex subject matter to young learners. They will put their work to the test a second time in a matter of a months, when Romanieo Jr.'s  brother or sister is born.

"He’s looking forward to being the big brother," Cheri said of her first-born.

These are not your textbook helicopter parents. They want to make sure they can provide an education that keeps their prodigy engaged, but at the same time they are humbled by the extent to which their hosts have gone to expose their son to possibilities. They know their son is special, but don’t treat him that way. They have no preference for what he makes of his life -- be it the arts or sciences.

"It’s important to remember right now he is very much an 8-year-old child," Romanieo Sr. proclaims. "He has to have time to play and be a kid." Usually that time is taken up with Legos, the boy’s personal favorite. Romanieo Sr. describes them as his son’s weakness, or "krypotnite, and was quick to implore his hosts not to feature them as part of their presentations, as others have in the past.

"If that happens, he’s gone, you can’t tear him away."