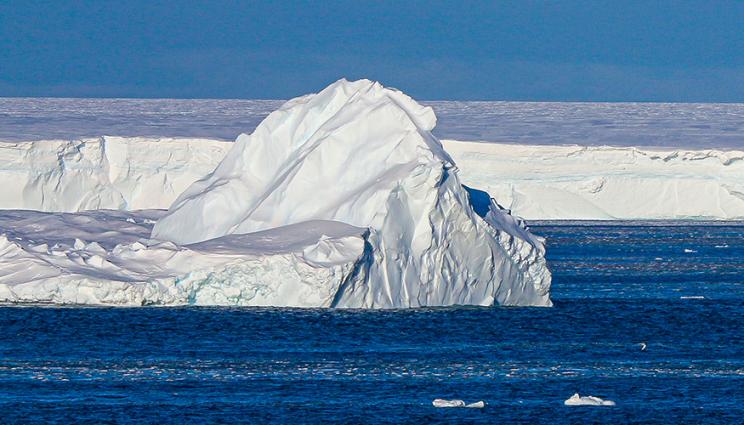 The Southern Ocean, Southern Hemisphere summer, February 2017. This floating iceberg was located off the Antarctic continent in the Weddell Sea, south of South America during the WAPITI (JR16004) cruise on the RRS James Clark Ross. This part of the global ocean has been found to be particularly sensitive to changes driven by ongoing climate change. Photo courtesy of Yves David (Association of Polar Early Career Scientists/APECS).

More than half the oceans impacted by climate change

More than 50 percent of the world’s oceans already could be impacted by climate change, with this figure rising to 80 percent over the coming decades, a research team including Lawrence Livermore National Laboratory (LLNL) oceanographer Paul Durack has found, using global ocean salinity, temperature observations and a large suite of global climate models. The findings appear in the August 17 issue of the journal Nature Climate Change.

“These results really surprised us. We found that for parts of the global ocean, observed changes are robustly reproduced by models,” said Yona Silvy, a doctoral candidate at LOCEAN-IPSL, Sorbonne Universite, Paris, and lead author of the paper. “The model results suggest that externally forced changes can be identified as early as the 1980-90s in the Southern Ocean, and 20-55 percent of the global ocean for the present day. The Southern Ocean plays a key role in driving the global climate responses to forced change, so identifying changes here is very important.”

Changes to the global ocean are important to monitor as the ocean is the largest heat sink in the climate system. The global ocean covers 70 percent of Earth’s surface and accounts for more than 90 percent of the Earth’s excess heat associated with global warming. Along with the temperature changes associated with climate change, observed ocean salinity patterns reflect coincident climate system changes to the Earth’s water cycle, ice and the cryosphere, along with land-based water stores as water moves around in the climate system.

The team found that climate models simulate the same changes to ocean salinity and temperature, across each of the three primary ocean basins, the Pacific, Atlantic and Indian oceans, as have been recorded in long-term reconstructions of observed change.

“We found that in models the global ocean is really sensitive to external forcing,” Durack said. “As global mean temperatures warmed past 0.9 degrees Fahrenheit, a milestone reached at the turn of the century, the ocean began to respond, with marked changes to ocean properties for all basins emerging from the background natural variability as global temperatures exceed 2.3 F. These changes continue in projections for the future -- by 2050, 40-65 percent, and by 2080, 55-80 percent of the global ocean, across all three basins, shows the coherent change.”

Since 1999, automated profiling floats (named Argo) have been measuring ocean salinity and temperature from the near-surface down to 2,000 meters. The 3,800 Argo floats currently active provide systematic measurement coverage of the global ocean and have significantly improved ocean understanding since 2005 when the Argo array became globally complete.

“When combined with historical data, Argo float measurements over the last two decades all show that the ocean salinity and temperature fields have been gradually changing,” said Jean-Baptiste Sallèe, a climate scientist from LOCEAN-IPSL.

“Given that the global ocean plays such a key role in ongoing climate variability and change, this study has important implications for how scientists view the Earth’s response to external forcing and its long-term changes,” said Eric Guilyardi, a climate scientist from the University of Reading, UK. “We’ve been lucky to have Argo to anchor our ocean understanding over the 21st century and need to ensure that we preserve and augment our global observing system so we can keep track of the ongoing changes.”

The study was conducted as part of the LLNL Climate Program through PCMDI, which is funded by the Department of Energy’s Office of Science.