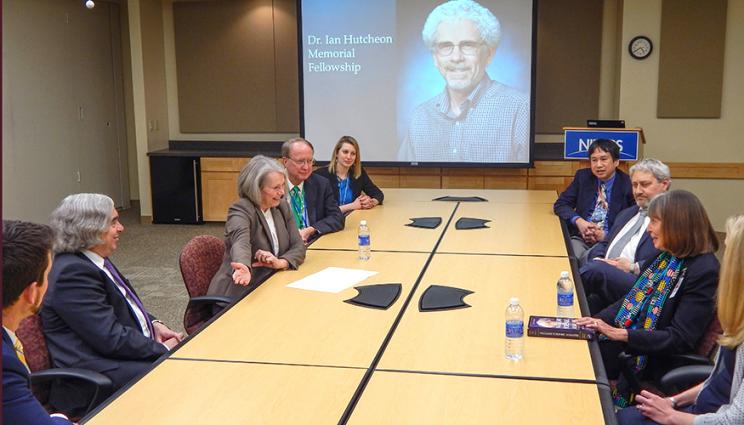 Gray serves as a nonproliferation graduate fellow in the National Nuclear Security Administration’s Office of Defense Nuclear Nonproliferation. Gray was one of 22 applicants for the position. The fellowship is a two-year assignment as a junior professional officer (JPO) in support of the International Atomic Energy Agency’s (IAEA) Division of Nuclear Security.

To the nuclear nonproliferation world, Hutcheon brought not only a passion for science, but an ability to reach out to partners internationally, engaging them in the science that supports U.S. nuclear security efforts. Because of his innate ability to engage, teach and inspire, Hutcheon was one of the very finest scientist-diplomats, with a unique ability to grow and inspire young talent.

It is in this spirit that DNN has created this fellowship to offer a unique opportunity to early career staff to work at the IAEA in support of nonproliferation goals.

"Ian led a team that was instrumental in creating our nuclear forensics program," said Anne Harrington, deputy administrator for DNN at the Department of Energy’s National Nuclear Security Administration (NNSA). "His very human touch — along with his superb scientific capabilities — made him one of our most valued scientist-diplomats."

"This recent honor recognizes his efforts to help with training scientists in countries around the world and in support of the Lab’s and the IAEA’s nuclear nonproliferation efforts," said Nancy Hutcheon, Ian's wife, when the fellowship was announced.

While Moniz noted that he was never fortunate enough to meet Hutcheon, he was familiar with his work, and remarked that he is "truly grateful for the work of Ian and others like him, whose tireless efforts, particularly in nuclear forensics, have been vitally important to the mission of the Department of Energy." He additionally noted, "that while he will be missed, it’s clear from the group present here to honor him that his important work will continue."

Gray will be heading to the IAEA in March. "I was never fortunte to meet Dr. Hutcheon, but in the month since I learned of my selection, I’ve heard so much about him," he said. "It’s a bit intimidating, because I have some big shoes to fill, but I will do my best to live up to his name in the next two years at the IAEA."

Hutcheon was most recently the group leader of the Chemical and Isotopic Signatures Group in Nuclear and Chemical Sciences Division and deputy director of the Glenn Seaborg Institute, Physical and Life Sciences Directorate, at Lawrence Livermore. He passed away March 26, 2015.

Hutcheon came to the Lab in 1993, after 20 years as a senior research associate at the University of Chicago and Caltech, where he established his reputation as an expert in secondary ion mass spectroscopy and its application to the field of cosmochemistry.

Hutcheon made numerous contributions to the study of the isotopic composition of meteorites and what they reveal about the evolution of the early solar system. He also was a key developer of nuclear forensics as both a field of scientific investigation and a scientific discipline with significant applications to national security. He conducted groundbreaking work in the formation mechanisms of planets and meteorites, and subtle, diffusion transport processes in terrestrial and planetary melts, glasses and minerals; and conducted the first NanoSIMS-enabled studies of biological materials (NanoSIMS is a high resolution imaging mass spectrometer used to probe extremely small materials). He authored more than 200 papers and book chapters, and co-wrote the book "Nuclear Forensics Analysis" with colleagues Pat Grant and Ken Moody.

In his 22 years at LLNL, Hutcheon built the Chemical and Isotopic Signatures Group from himself, two others and one secondary ion mass spectrometer, to a team of 38 (scientists, postdocs, graduate students and technicians), filling Bldg.151 with multiple mass spectrometry labs, a scanning electron microscope, other analytical equipment and sample prep labs. The breadth of study within the group includes nucleosynthesis; formation and evolution of meteorites and planets; mineralogy and petrology of unequilibrated meteorites; sub-cellular imaging of biological samples and isotope tracing into cells of all types; environmental microbiology; and nuclear forensics and attribution. The academic excellence he developed as a senior research associate at the University of Chicago and Caltech, in the previous 20 years of his career, burned bright, and he tried to instill in his group the importance of doing great science and getting it out into the world through publications.

Candidates eligible for the new fellowship must be early career (two to three years of experience) contractor or Laboratory employees working in support of the DNN mission; and terms of employment should be consistent with IAEA requirements, which can be found on the IAEA website.