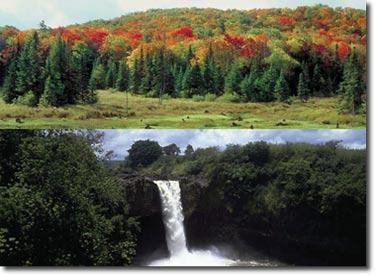 Panel a: Direct warming associated with global forest cover. (These are results from a forest covered world minus the results for bare ground). Forests produce over 10°C (18°F) of warming in parts of the northern hemisphere due primarily to increased absorption of solar radiation. Forests produce several degrees of cooling in tropical areas, primarily due to increased evapotranspiration (evaporation). Panel b:Direct warming associated with forest cover between between 20°N and 50°N. (These are results from actual vegetation with added forests in the mid-latitudes minus the results for bare ground.) Mid-latitude forests can produce warming locally of up to 6°C (10°F). Panel c: Increase in fractional absorption of solar radiation at the ground for forests relative to bare ground. to download a high-resolution image.)

LIVERMORE, Calif. — Planting trees across the United States and Europe to absorb some of the carbon dioxide emitted by the burning of fossil fuels may just outweigh the positive effects of sequestering that CO².

In theory, growing a forest may sound like a good idea to fight global warming, but in temperate regions, such as the United States, those trees also would soak up sunlight, causing the earth's surface to warm regionally by up to 8 degrees Fahrenheit.

Using climate models, researchers from Lawrence Livermore National Laboratory and the Carnegie Institution Department of Global Ecology have found that forests in the mid-latitude regions of the Earth present a more complicated picture. Trees in these areas tend to warm the Earth in the long run.

The conclusion: Planting a forest in the United States could cool the Earth for a few decades, but would lead to planetary warming in the long term. These are the results of a study that will be presented at 8:30 a.m. Wednesday, Dec. 7, at the American Geophysical Union Fall Meeting in San Francisco.

"On time scales longer than a few centuries, the net effect will actually be warming in these regions," said Govindasamy Bala of the Livermore team. "We thought planting trees across the northern hemisphere would help curb global warming by the CO² absorption but what we found was a different story."

The researchers also found that planting trees between 30 and 50 degrees latitude worldwide saw the global mean surface air temperature increase by 0.7°F. Regional warming in North America and Eurasia was as high as 8°F. In earlier studies, planting trees in the boreal forest regions (found mostly in the upper half of the Northern Hemisphere) caused a warming of surface temperatures.

"Although it was previously known that trees could have an overall warming effect in the boreal forests (north of 50 degrees), this is the first study to show that temperate forests could lead to net global warming," said Livermore's Seran Gibbard, lead author of the study.

The story is different for the tropical forests. In tropical regions, forests help keep the Earth cool by not only absorbing carbon dioxide, but by evaporating plenty of water as well.

"Should we give carbon credit to the planting of forests? Probably not for countries in mid and high latitudes," Bala said. "But the tropical forests present a win-win because they cool the planet by evaporative cooling and the uptake of carbon."

Co-author Ken Caldeira of the Carnegie Institution warned that proposals to grow more forests to cool the planet should be greeted with caution.

"I like forests. They provide good habitats for plants and animals, and tropical forest are good for climate, so we should be particularly careful to preserve them," he said. "But in terms of climate change, we should focus our efforts on things that can really make a difference, like energy efficiency and developing new sources of clean energy."

The research, also authored by Thomas Phillips and Michael Wickett of Lawrence Livermore, will appear online in the Dec. 8 issue of the journal Geophysical Research Letters .