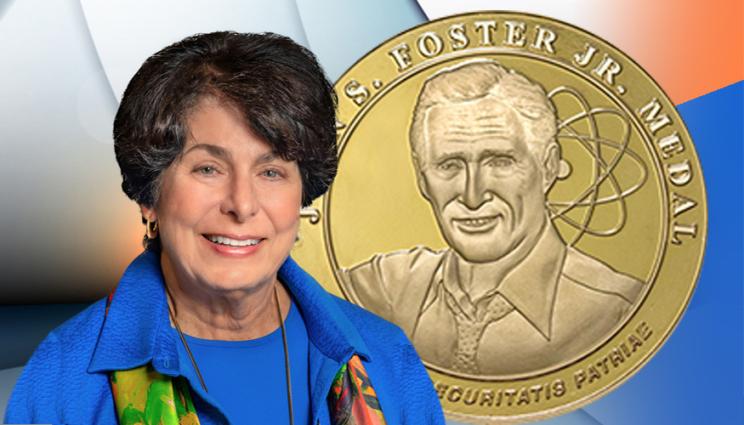 John served as vice president of Sandia's California Division and Homeland Security Strategic Management Unit from 1999 until 2006. She served in various capacities at Sandia beginning in 1978, including director of the Center for Exploratory Systems and Development (1992–1999), senior manager, Systems Analysis and Assessment, 1991–1992 and manager, W89/SRAM II Test and Evaluation, 1989–1991. Her areas of expertise include nuclear weapons and nonproliferation, chemical and biological defense, remote sensing, micro-technologies, systems analysis and engineering, naval operations and analysis, homeland defense and critical infrastructure and command and control.

“This award represents the highest ideals of service to the nation, which Johnny embodies so well and uniquely,” John said. “To even be nominated for the award is an honor. To be selected to receive it is beyond anything I could have imagined. And to be happening at the same time we are celebrating Johnny’s 100th birthday…could anything be more special?”

Lawrence Livermore and Sandia National Laboratories, with its main site in Albuquerque, N.M., maintain a unique partnership underscored by their co-location — the Sandia California site and Lawrence Livermore are right across the street from each other in Livermore, California, and collaborate closely on national security missions.

“The strong partnership between ‘the two sides of East Avenue on joint efforts I was a part of included SDI [Strategic Defense Initiative], the W89/SRAM II (which was the last new weapon development program in Livermore before the Berlin Wall fell), and the startup of a chem/bio defense program at the Department of Energy,” John said. “The latter also opened the door for me to help establish a bioscience program at Sandia – a hard sell in a lab grounded in engineering and the physical sciences.”

“It is great to see my colleague Mim John win the Foster medal,” Budil said. “Throughout her tenure at Sandia, we at LLNL really valued her spirit of cooperation, creativity and partnership. In addition to her important contributions as a leader at Sandia, Mim has had an incredible impact across the national security community. As a member of the Defense Science Board and adviser to a number of organizations, she has used her extensive knowledge across a wide range of national security and nuclear enterprise challenges to provide sage guidance in times of significant change. I send my congratulations and thanks for her years in service to the nation.”

John received her bachelor’s degree from Rice University, her master’s from Tulane and her Ph.D. in chemical engineering from Princeton. She joined the Livermore, California site of Sandia National Laboratories as a member of the technical staff in 1978. In 1982, she was named to her first management position in thermal and fluid mechanical analysis. Her work involved close liaison with the LLNL design team and the nuclear weapons production enterprise as several warhead designs in the early ‘80s made their way through development to production. A subsequent role brought her closer to partnering with LLNL as she led the systems analysis efforts on a number of directed energy concepts proposed in the Strategic Defense Initiative.

As her career advanced, she was named department manager with responsibility for Phase One nuclear weapons studies and for targeting assessments, then director of a new organization that included chem-bio defense, reliability for Sandia components of LLNL systems and broad deterrence assessment studies. In 1999, she was named vice president for the Sandia California site, a position she held for seven years. In that role, she was responsible for all activities at the Sandia California site, led Sandia’s engagement with LLNL and served as a member of the overall Sandia senior management team with special responsibilities in the nuclear weapons and homeland security areas.

Experience with the National Security Enterprise

John has worked with many people and institutions both during and after her career at Sandia, including Johnny Foster himself.

“Sandia was career No. 1,” she said. “It taught me how much a team could accomplish that few individuals alone could even imagine. But then came career No. 2, which gave me the opportunity to work for and with some truly remarkable people, many of whom have already been recognized as prior Foster Medal recipients…including Johnny himself. We met 26 years ago at a Defense Science Board summer study – and by both example and coaching, he taught me how to make my voice heard among the formidable, accomplished and often rancorous DSB elite advising the Secretary of Defense.”

In this latter phase of her career, she has been able to contribute to a wide range of nuclear issues, including nuclear survivability, proliferation monitoring, command and control and the health and evolution of the nuclear bomber leg of the Triad.

The Department of Defense has recognized John with the prestigious Eugene G. Fubini Award for her “highly significant contributions to the Department of Defense in an advisory capacity over a sustained period of time.” John was appointed a national associate of the National Academies of Sciences, Engineering and Medicine and is the recipient of the Navy’s Superior Public Service Award in recognition of her leadership and studies for the Academies’ Naval Studies Board.

Established by Lawrence Livermore National Security, LLC (LLNS) and bestowed on an annual basis by the director of LLNL, the medal recognizes exceptional leadership in scientific, technical, and engineering development and policy formulation in support of U.S. nuclear security. Instituted in 2015, the inaugural recipient was namesake John S. Foster Jr., former director of LLNL. The 2016 honoree was Gen. Larry Welch (retired), former U.S. Air Force chief of staff; the 2017 recipient was Victor Reis, the architect of the Stockpile Stewardship Program; the 2018 honoree was John Nuckolls, director emeritus of LLNL; and the 2019 honoree was Linton Brooks, ambassador for arms control and former administrator of the National Nuclear Security Administration (NNSA). No medal was given in 2020. In 2021, Laboratory Director Emeritus George Miller was the awarded the honor.