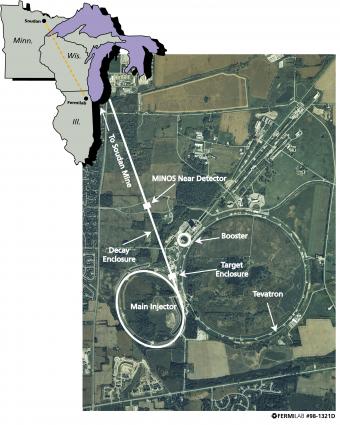 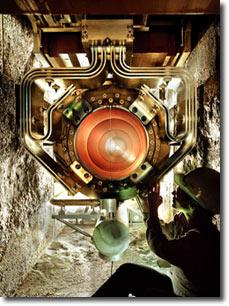 When operating at highest intensity, the Fermilab beam line transports a package of 20,000 billion protons every two seconds to a graphite target. The target converts the protons into bursts of particles with exotic names such as kaons and pions. Like a beam of light emerging from a flashlight, the particles form a wide cone when leaving the target. A set of two special lenses, called horns (photo), is the key instrument to focus the beam and send it in the right direction. The beam particles decay and produce muon neutrinos, which travel in the same direction.

LIVERMORE, Calif. — Scientists have successfully observed the transformation of neutrinos – a particle that is relatively massless, has no electric charge, yet is fundamental to the structure of the universe – from one type to another.

Using two giant detectors, one at Fermilab and another in a historic iron mine in northern Minnesota, the team is working to solve a 50-year-old mystery – how exactly do these particles change “flavors?”

Neutrinos come in three “flavors”: electron, muon and tau. Each is related to a charged particle, which gives the corresponding neutrino its name. Neutrinos are extremely difficult to detect because they rarely interact with anything. They can pass easily through solid objects such as a planet, walls or even a human hand without leaving a trace of their existence.

Sending a high-intensity beam of muon neutrinos from the Fermilab site in Batavia, Ill., to the particle detector in Soudan, Minn., scientists observed the disappearance of a significant fraction of these neutrinos. The observation is consistent with an effect known as neutrino oscillation, in which neutrinos change from one kind to another.

These findings may shed some light on how galaxies formed and why antimatter has disappeared. The abundance of neutrinos in the universe, produced by stars and nuclear processes, may explain the origin of the neutrons, protons and electrons that make up all the matter in the world around us.

“This is a milestone of the progress in this field,” Barnes said.

The neutrinos were generated along the underground beam line at Fermilab, passed through the near detector at Fermi, and traveled through the Earth to the detector in Minnesota. The MINOS scientists chose the distance to the far detector to maximize the oscillation probability, which gives them the best opportunity to directly study the neutrino “flavor change.”

If neutrinos had no mass, the particles would not change as they traverse the Earth, and the MINOS detector in Soudan would have recorded about 177 muon neutrinos. Instead, the MINOS collaboration found only 92 muon neutrinos — a clear observation of muon neutrino disappearance.

This conclusion indicates that neutrinos do have some mass, small as it may be, in order for them to oscillate. So a portion of the muon neutrinos emitted from the beam could have changed flavors to electron or tau neutrinos before reaching Minnesota.

Studying the nebulous neutrino will help scientists better understand particle physics, specifically how particles acquire mass, as well as its role in the formation of the universe and its relationship to dark matter.

Livermore’s portion of the project is funded by Laboratory Directed Research and Development and the Physical Data Research Program. The MINOS effort as a whole is funded by the Department of Energy’s Office of Science, High Energy Physics division.

The MINOS experiment includes about 150 scientists, engineers, technical specialists and students from 32 institutions in six countries. The results were announced today at Fermilab.