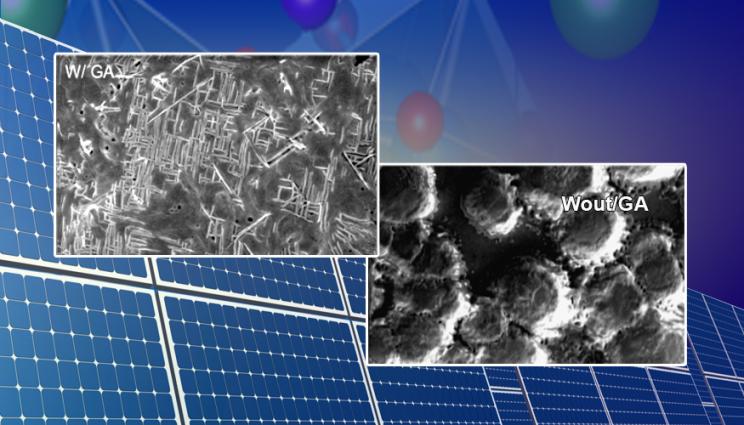 At left, the flatness and continuous regular pattern in the image is evidence of a highly crystalline, well-connected perovskite film. The surface used to be in contact with the HTL/graphene aerogel. At right, the irregular, uneven nature of the image suggests an amorphous film. This surface was in contact with the pure HTL. A more continuous, more crystalline perovskite film performs better in solar conversion efficiency.

A mineral found in nature may be the key to more efficient solar panels.

"We have set the record now for different parameters of perovskite solar cells, including the efficiency," said senior author Alex Zettl, a UC Berkeley professor of physics, senior faculty member at Berkeley Lab and member of the Kavli Energy Nanosciences Institute. "The efficiency is higher than any other perovskite cell – 21.7 percent – which is a phenomenal number, considering we are at the beginning of optimizing this."

Solar efficiency refers to what portion of sunlight energy is converted to electricity via the use of photovoltaic technology. In the new research, the graded band gap perovskite device achieved an 18.4 percent steady efficiency rate and a peak rate of 26 percent. Typical solar silicon panels have a maximum efficiency rate of about 20 percent, but the steady rate can be less than that.

"Perovskite solar cells have the potential of achieving even higher efficiencies," said Worsley, a co-author of the paper. "Perovskite materials are cheap to produce and the solar cells are simple to manufacture, opening the door to flexible substrates."

Unlike silicon cells, which require expensive, multistep processes, involving a clean room and high vacuum, perovskite cells can be made in traditional wet chemistry laboratories.

"These advantages have made perovskite solar cells commercially attractive alternatives to silicon-based solar cells," Worsley said. "If perovskite cells reach their potential in terms of efficiency and can be reliable and at large-scale, they have the potential to displace silicon."

Researchers at UC Berkeley designed the new solar cell configuration. The cells are based on architecture of two perovskite layers, incorporating gallium nitride, a monolayer hexagonal boron nitride and graphene aerogel, a type of material developed at Lawrence Livermore.

The graphene aerogel is incorporated in the hole transport layer under the perovskite absorber layer and serves several critical roles in enhancing the performance of the solar cell, Worsley said. Firstly, it serves as a moisture barrier for the perovskite (it is well known that humidity can degrade cell performance/stability). Its high surface area promotes the growth of a continuous layer of large, highly crystalline perovskite grains, which improve conversion efficiency. The presence of the graphene aerogel also improves the compositional homogeneity of the hole transport layer, which also increases conversion efficiency.

"In all cases, incorporating the graphene aerogel in the hole transport layer resulted in cells, which were better able to maintain a stable graded band gap and achieve higher conversion efficiencies," Worsley said.

Perovskite occurs naturally as a mineral -- calcium titanium oxide -- but other combinations of elements can adopt the exact same shape. In the future, scientists can experiment with different chemical compositions to see what elements end up absorbing which frequency of light most efficiently.