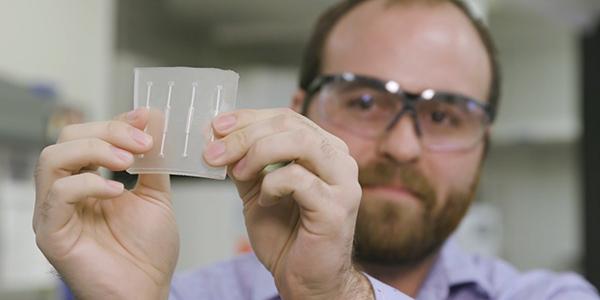 By combining fluidics technology with cell seeding, Lawrence Livermore National Laboratory researchers have developed a device capable of reproducing the human blood-brain barrier on a chip-based platform in both 2D and 3D, bringing them one step closer to recapitulating the brain’s response to biochemical and mechanical cues. Photos by Maren Hunsberger/LLNL

Engineers and biologists at Lawrence Livermore National Laboratory  (LLNL) have made significant strides in modeling the human brain outside the body on a chip, but to truly recreate the effects of drugs or chemical agents on the central nervous system, researchers will need to accurately simulate the blood-brain barrier (BBB).

Normally the BBB, the vasculature that regulates the passage of chemicals and other substances from the bloodstream to the brain, does an excellent job of keeping potentially harmful molecules from crossing over and affecting the central nervous system. The downside is that if clinicians need to treat a brain disorder, toxic chemical exposure or tumor, it’s difficult to get a therapeutic drug across the threshold. Currently this research relies heavily on animal models, which is not an accurate surrogate for humans, so having a platform to mimic the BBB could lead to breakthrough drug development discoveries or help develop countermeasures to chemicals or biological agents, according to Lab scientists.

With a recent publication in the journal Annals of Biomedical Engineering (ABME), a team of LLNL researchers are one step closer to recapitulating the brain’s response to both biochemical and mechanical cues in a chip-based platform. By combining fluidics technology with cell seeding, the team has developed a device capable of reproducing the blood-brain barrier in both 2D and 3D, also allowing for cultures of cells around the barrier in both static and flow states, a development that could enable future brain-on-a-chip devices to be more physiologically relevant.

LLNL’s flexible approach, researchers said, will become a valuable tool for studying the BBB, allowing scientists to carry out a wide variety of experiments ranging in complexity, such as optimizing drug delivery or understanding disruptions that cause brain disorders, and to easily observe or analyze changes in the brain cells without changing the device.

“Often with these organ-on-a chip devices, engineers will make a device designed only for what they’re interested in. Sometimes these complicated fluidic designs are made for specific purposes and you can’t really do anything beyond the intended purpose,” said lead author and LLNL engineer Monica Moya. “Our device is reconfigurable. The benefit is that you can repeat different experiments all on a single device. It’s also easy to manufacture. You don’t need a clean room to make this; it’s a simple molded design. And if we want to recover the sample and do further processing, we can.”

The new platform developed at LLNL, which fits in the palm of the hand, reproduces the key characteristics of the BBB, including its main elements — cerebral endothelial cells, support cells and astrocytes. To create the device, researchers fabricated four independent channels, hollow “fibers” mimicking arteries, and sandwiched them between two silicone-based organic polymer layers. The team seeded the fibers with endothelial cells from the human brain on the inside of the channels, introduced the astrocytes on the outside, and modeled the brain’s flow of blood by continuously pumping a fluid through the device’s chambers. Ports on the outside of the device allowed the team to sample the molecules that made it across the barrier.

The researchers demonstrated their BBB device is capable of culturing cells under static or flow conditions of varying rates — the “flow” of media consisting of nutrients for cells such as proteins and sugars mimicking the blood. The researchers found they were able to culture support cells with either the astrocytes and endothelium in contact with each other or separately, to better understand the interaction between them. They found they also could test the device in three dimensions by embedding human-derived astrocytes in a hydrogel around the fibers to understand the effect of matrix interactions on the entire neurovascular unit. Investigators were able to maintain a healthy population of astrocytes for nearly a month, proving that it could support experiments in three-dimensional space, a clear advantage over 2D fluidic models. Because the device can accommodate stresses caused by flow, it presents a “truly comparable control” for experiments in physiological flow mechanics, researchers concluded.

“In the human body, the cells that make up our blood vessels, including the micro-vessels that make up the BBB, grow and develop under flow conditions,” said co-author Michael Triplett. “In order to isolate the effect of flow mechanics on the endothelium, you need a device that can culture these cells not only under various flow rates but also under static conditions. Our device gives us the flexibility to successfully culture these cells under various flow rates, including flow rates outside of the physiological range, and directly compare those results to a static control.”

Due to its unique design, Lab scientists were able to introduce cells and nutrients into the device and remove waste products without stopping the flow or removing the device from an incubator. After seven days, researchers observed a layer of endothelial cells had formed a connected monolayer with the tight junctions that make up the BBB. In addition to successfully creating the BBB, the researchers showed the barrier system was responsive.

Researchers characterized the barrier by analyzing its permeability to dextran, a carbohydrate made from glucose. They found the transport of dextran increased in response to two stimulants, a protein that causes inflammation and a signal protein that causes blood vessels to form, just as it would in the human body. They also tested the active transport of calcein-AM, finding they were able to block calcein-AM transport out of the endothelial cells constituting the barrier with a transporter inhibitor called verapamil. Perhaps most significantly, the endothelial cells also responded to the flowing fluid by aligning themselves in the direction of the flow and morphing, suggesting the cells reorganize under flow conditions. The findings were contrary to several previously published papers that had only looked at flow exposure for less than two days. Flow alignment in the LLNL system was observed as early as three days of flow culture and persisted prominently through 14 days of culture.

“Many of these studies that were making the claims that endothelial cells in the brain don’t line up with flow were done at much shorter length scales,” Moya explained. “Previous work had just assumed that brain endothelial cells didn’t line up with the flow because those studies were all done on short time scales. We found it takes at least three-five days before you start to see that alignment. The evidence is pretty pronounced; it’s very obvious these cells are definitely responsive to flow.”

The LLNL team said future work could focus on coupling the BBB device with the Lab’s brain-on-a-chip device, creating a much stronger, more physiologically relevant platform. Other research could look at understanding the effects of flow, timing and geometry on cell alignment within the fibers. Tweaking the device’s design could allow for materials better suited for large-scale production, such as thermoplastics, the researchers concluded. Moya and her group also are working on bio-printing the BBB to remove the synthetic barrier in the device’s channels, in order to better mimic the natural interactions between cells.