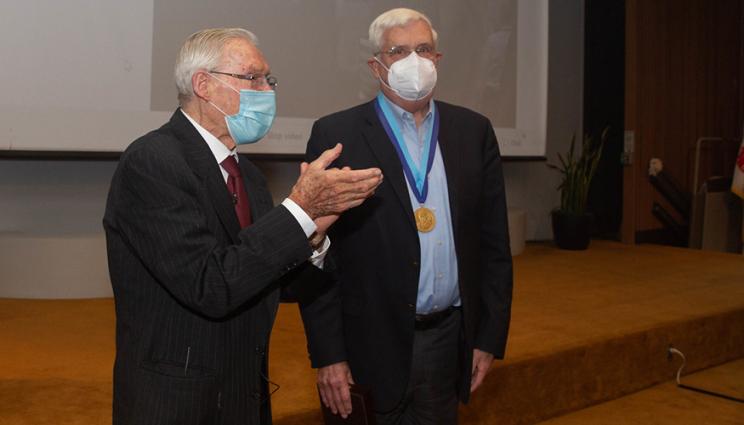 Laboratory director emeritus George Miller recently was awarded the sixth John S. Foster, Jr. Medal for his long service to Lawrence Livermore and contributions to the nation’s security. In a hybrid ceremony Nov. 30, a series of prominent scientific leaders detailed Miller’s career and impact on the U.S. nuclear deterrent, the stockpile stewardship program (SSP) and the National Ignition Facility (NIF).

Thanking all of the scientists, engineers and support staff during his career, Miller said: “For me, this award is a recognition of all they have done to help me,” accepting the medal on their behalf. Honoring his fellow Lab director emeritus, he said that Foster “has always been one of my heroes,” the “Captain Kirk” of the Laboratory, addressing scientific challenges and existential questions while always accomplishing the mission at hand. Foster assisted Laboratory Director Kim Budil in presenting the medal to Miller.

Speaking extemporaneously, Foster said: “George Miller has been a stellar model for all who have done their duty in working for the security and safety of our country.”

“We are all in this together, all with our unique talents, all pointed at the greater good,” Miller said during his acceptance speech.

Arriving at the Laboratory on July 28, 1972, Miller was, according to his first division leader William Lokke, “one of the few employees who found his clearance waiting for him.” Miller’s father was a longtime CIA employee and winner of its distinguished service award, instilling in his son a strong affinity for public service. During the ceremony, several speakers cited Theodore Roosevelt, John Adams and John F. Kennedy as inspirations for Miller’s career.

Miller spent eight years with A Division, leading design on two weapons projects, before becoming its leader in 1980. In 1985, Miller became associate director for the Laboratory’s entire nuclear weapons program.

After a year serving as special scientific adviser to the Secretary of Energy, Miller returned to Livermore in 1990 — just in time for a massive change in the Lab’s mission. Bruce Tarter, then associate director for physics, joined Miller among five Laboratory leaders who spent one weekend in 1993 rethinking the weapons program after passage of the comprehensive test ban. Over the course of the following years, Lawrence Livermore transitioned toward the SSP, guided in large part by Miller.

“That five-year period, with that cast, was only matched by the first 10 years of the Lab,” Tarter said.

During the 1990s, Miller served as associate director for Defense and Nuclear Technologies and associate director for National Security. As the weapons program transitioned to SSP, “George embodied the scientific conscience of the U.S. nuclear weapons enterprise,” said Vic Reis, the 2017 winner of the Foster Medal.

In 1999, Miller became associate director for NIF Programs, despite his career at the Lab being in weapons rather than lasers. Regardless, according to former NIF Director Ed Moses, Miller had “an array of superpowers” that helped him transform the early development of NIF.

“George changed the dynamic from fear to opportunity,” Moses aid.  “His confidence was very contagious to us.”

In 2006, Miller became the Laboratory director, serving until 2011. During that span, he oversaw Lawrence Livermore’s transition to management by LLNS, LLC and collaborated with the directors of Los Alamos and Sandia national laboratories on a series of “road shows” to help inform lawmakers in Washington, D.C. about their work. Los Alamos director emeritus Michael Anastasio spoke about Miller’s effective advocacy on behalf Livermore and all the national laboratories.