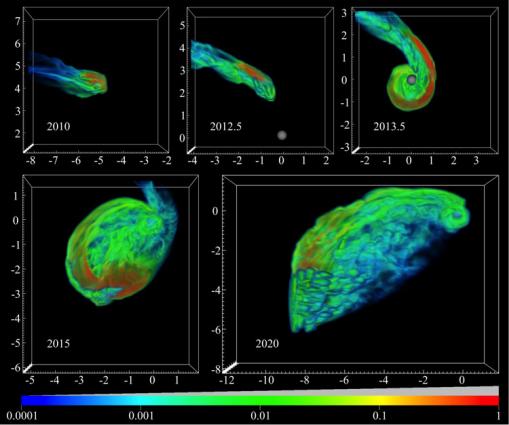 Three-dimensional, volume visualization spanning the period 2010 to 2020, of the gas and dust cloud as it approaches the Sgr A* black hole near the center of the Milky Way galaxy.

Get ready for a fascinating eating experience in the center of our galaxy.

The event involves a black hole that may devour much of an approaching cloud of dust and gas known as G2.

A supercomputer simulation prepared by two Lab physicists and a former postdoc suggests that some of G2 will survive, although its surviving mass will be torn apart, leaving it with a different shape and questionable fate.

The findings are the work of computational physicist Peter Anninos and astrophysicist Stephen Murray, both of AX division within the Weapons and Complex Integration Directorate (WCI), along with their former postdoc Chris Fragile, now an associate professor at the College of Charleston in South Carolina, and his student, Julia Wilson.

They came up with six simulations, using the Cosmos++ computer code developed by Anninos and Fragile, which required more than 50,000 computing hours on 3,000 processors on the Palmetto supercomputer at Clemson University's Tech Center in Anderson, S.C.

Previous simulations of the upcoming event had been done in two-dimensions, but the Cosmos++ code includes 3D capability, as well as a unique "moving mesh" enhancement, allowing the simulation to more-efficiently follow the cloud's progression toward the black hole.

The black hole is known as Sgr A*. "Sgr" is the abbreviation for Sagittarius, the constellation near the center of the Milky Way. Most galaxies have a black hole at their center, some thousands of times bigger than this one.

"While this one is 3-to-4 million times as big as our sun, it has been relatively quiet," according to Murray. "It's not getting fed very much." Contrary to their name, black holes can appear very bright. That's because gas orbiting them loses energy via friction, getting hotter and brighter as it spirals inward before falling into the black hole.

The composition of the G2 cloud is still a mystery.

Astronomers originally noticed something in the region in 2002, but the first detailed determinations of its size and orbit came only this year. The dust in the cloud has been measured at about 550 degrees Kelvin, approximately twice as hot as the surface temperature on Earth. The gas, mostly hydrogen, is about 10,000 degrees Kelvin, or almost twice as hot as the surface of the sun.

Its origin is still unknown.

Murray says: "The speculation ranges from it having been an old star that had kind of a burp and lost some of its outer atmosphere, to something that was trying to be a planet and couldn't quite manage it because the environment was too hot."

As the cloud approaches the black hole and begins to fall into what Murray describes as "a gravity well" beginning next September, it will begin to shed energy, causing it to heat to incredibly high temperatures, visible to radio and X-ray telescopes on Earth as well as orbiting satellites such as NASA's Chandra X-ray Observatory.

But it won't be a collision course.

The point at which a stellar object can no longer escape being swallowed by a black hole is known as the Schwarzschild radius, a quantity whose value depends on the black hole's mass, the speed of light and the gravitational constant.

The cloud will actually pass far enough away that it will escape the point of no return by approximately 2,200 Schwarzschild radii, which in this case is about 200 times as far as Earth is from the sun.

But the supercomputer simulations show that the cloud will not survive the encounter.

According to Anninos: "There's too much dynamical friction that it experiences through hydrodynamic instabilities and tidal stretching from the black hole. So a lot of its kinetic energy and angular momentum will be dissipated away and it will just sort of break up into some sort of incoherent structure. Much of it will join the rest of the hot accretion disk around the black hole, or just fall and get captured by the black hole. It will lose a lot of its energy but not all of it. It will become so diffuse that it's unlikely that any remnant of the gas will continue on its orbital track."

The close encounter will take several months. The entire event is predicted to last less than a decade.

The simulation is posted on the Dr. P.Chris Fragile Website. It shows the cloud modeled as a simple gas sphere, near the point in its orbit where it was first discovered. As it approaches Sgr A*, a process known as tidal stretching increasingly distorts the cloud. By the end of 2012, the cloud will be nearly five times longer than it is wide.

Along with tidal stretching, the cloud also experiences resistance in the form of ram pressure as it tries to plow through the hot interstellar gas that already fills the space around Sgr A*. The interactions of G2 with this background gas cause further disruptions to the cloud from Rayleigh-Taylor and Kelvin-Helmholtz instabilities. Collectively, these effects act to strip some material from the cloud and feed it into Sgr A*.

An article describing the simulation research will appear in an upcoming issue of the Astrophysical Journal.