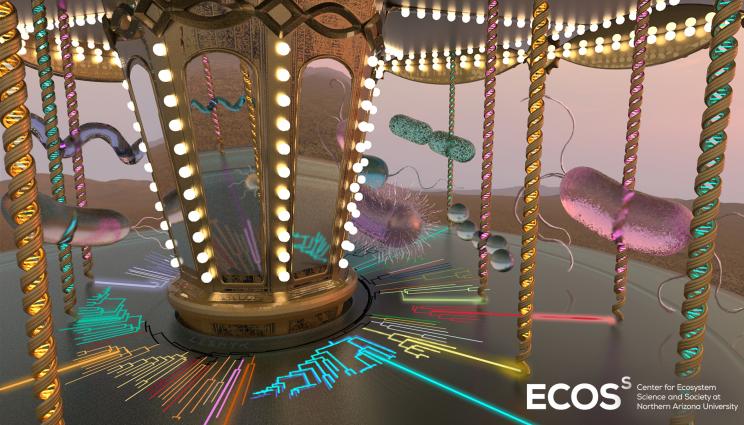 Bacteria in nature vary in their rate of growth, and these rates are strongly constrained by the evolutionary histories of individual bacterial lineages. In this microbial merry-go-round, the velocity of each bacterial cell indicates its relative growth rate: faster for those posted near the edge of the spinning carousel, and slower for those stationed toward the center, with the various positions rooted in place by the bacterial tree of life. New data indicate that this carousel metaphor applies over a range of environments, from high desert grassland to subalpine prairie. Image by Victor Leshyk/Northern Arizona University.

Microbial growth and carbon uptake are driven mainly by nature, not nurture

For soil microorganisms, how much of their life’s work is driven by evolution (nature) versus their current environmental (nurture)?

As it turns out, the evolutionary history of soil microorganisms plays a larger role in growth rates and carbon uptake, according to a new study appearing in the June 17 edition of the journal Nature Ecology & Evolution.

"Our results suggest that, similar to multicellular organisms, the traits of soil bacteria in their natural habitats are constrained by evolutionary history to a greater degree than environmental variation," said Lawrence Livermore National Laboratory (LLNL) biologist Jennifer Pett-Ridge, a co-author on the paper.

In the research, led by Ember Morrissey at West Virginia University, a team of microbial ecologists studied soil microorganisms in systems ranging from conifer forests to a high desert grassland. They found that the growth rate and carbon uptake of individual microbial populations was directly related to aspects of their genomes that reflect evolutionary relationships, much like a family tree can track similar traits among family members.

Most of the explainable variation (about 50 percent to 90 percent) in microbial growth rate and carbon uptake was attributed to differences that are hard-wired by the genomes of each species.

Trait-based approaches for understanding communities have transformed the world’s understanding of how species interact with one another and their environments. Most famously, trait variation in finch species, such as beak morphology, helped Darwin develop the theory of evolution.

Heritable traits not only help relate ecology to evolution, but trait-based research has radically improved scientists’ ability to understand and predict ecosystem biogeochemistry — for example by categorizing plants into distinct functional types. But until recently, characterizing traits of microorganisms in their natural communities has been nearly impossible due to their small size and enormous diversity.

In the new research, the team used a technique developed at Northern Arizona University called quantitative stable isotope probing (qSIP) that permits population-level measures of key traits including growth rate and carbon uptake for hundreds of microorganisms within their natural environments.

To assess the influence of evolutionary history versus environmental conditions on microbial traits, the team assessed growth and carbon uptake rates in four ecosystems that varied in elevation, temperature and annual precipitation: a desert grassland, a pinyon juniper woodland, a ponderosa pine forest and a mixed conifer forest.

Researchers from Northern Arizona University led by Bruce Hungate, the University of Massachusetts and Pacific Northwest National Laboratory also contributed to this project.

The work was funded by the Department of Energy’s Biological Systems Science Division, Program in Genomic Science and the National Science Foundation.