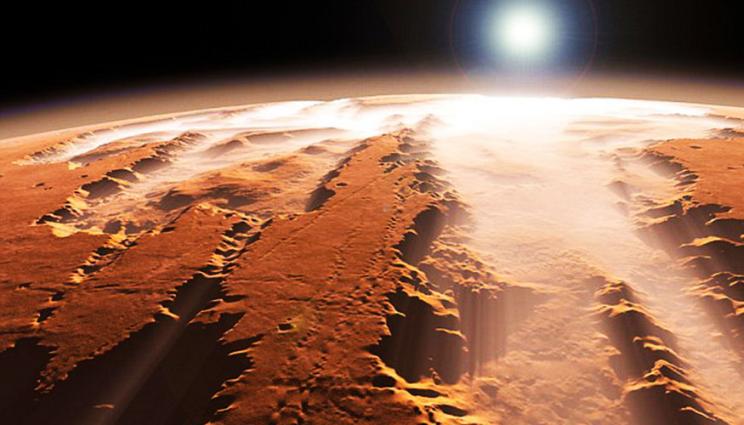 New research by Lawrence Livermore National Laboratory shows that trapped gasses in ancient Martian meteorites pin down the timing and effectiveness of atmospheric escape processes that have shaped Mars’ climate.

Liquid water is not stable on Mars’ surface because the planet’s atmosphere is too thin and temperatures are too cold. However, at one time Mars hosted a warm and wet surface environment that may have been conducive to life. A significant unanswered question in planetary science is when Mars underwent this dramatic change in climate conditions.

New research by Lawrence Livermore National Laboratory (LLNL) cosmochemist Bill Cassata shows that, by looking at trapped gasses in ancient Martian meteorites, the timing and effectiveness of atmospheric escape processes that have shaped Mars’ climate can be pinned down. The research appears in Earth and Planetary Science Letters.

Cassata analyzed the Martian atmospheric gas xenon (Xe, in two ancient Martian meteorites, ALH 84001 and NWA 7034. The data indicate that early in Martian history there was a sufficient concentration of atmospheric hydrogen to mass fractionated Xe (selectively removed light isotopes) through a process known as hydrodynamic escape. However, the measurements suggest this process culminated within a few hundred million years of planetary formation (more than 4 billion years ago), and little change to the atmospheric Xe isotopic composition has occurred since this time.

This differs significantly from Earth, where Xe isotopic fractionation was a gradual process that occurred throughout much of planetary history, indicating that atmospheric dynamics on the two planets diverged early in the history of the solar system.

The fact that Xe fractionation on Mars ceased more than 4 billion years ago suggests that, on Mars, the hydrogen escape flux did not exceed the threshold required to continuously fractionate atmospheric Xe, as it did on Earth, potentially because Mars did not have sufficient atmospheric water available to generate atmospheric hydrogen via photodissociation.

"These data suggest that liquid water may not have been abundant on the Martian surface since a few hundred million years after planetary formation, and therefore Mars may have been cold and dry planet for the vast majority of its history," Cassata said.

The work was funded by the NASA Mars Fundamental Research Program and the Laboratory Directed Research and Development program.