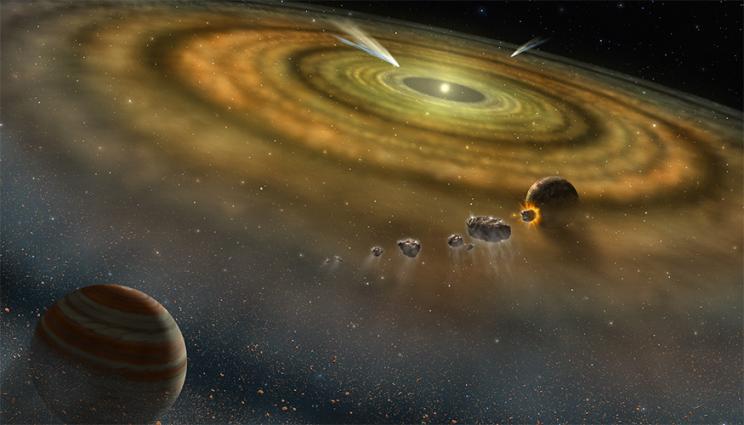 The isotopic composition of meteorites and terrestrial planets holds important clues about the earliest history of the solar system and the processes of planet formation.

Lawrence Livermore National Laboratory (LLNL) scientists and a collaborator from the University of Münster reviewed recent work that shows how meteorites exhibit a fundamental isotopic dichotomy between non-carbonaceous (NC) and carbonaceous (CC – rocks or sediments containing carbon or its compounds) groups, which most likely represent material from the inner and outer solar system. The research appears in the journal Nature Astronomy.

The solar system formed 4.5 billion years ago by the gravitational collapse of a molecular cloud core, which resulted in the formation of a circumsolar disk of gas and dust (sometimes called the solar nebula). This disk was ultimately transformed into a planetary system consisting of a single central star, the sun, surrounded by four terrestrial planets in the inner solar system, four giant planets in the outer solar system beyond the “snow line” and a multitude of smaller bodies, including asteroids, moons, dwarf planets and comets.

“To understand how the solar system evolved toward its present-day configuration, the events and processes occurring during the earliest stages of solar system history must be reconstructed at a very high temporal and spatial resolution,” said LLNL cosmochemist Thomas Kruijer, lead author of the paper.

Although astronomical observations and dynamic modeling provide fundamental insights into the structure and dynamics of protoplanetary disks, and the processes of planetary accretion, the study of meteorites allows the reconstruction of the solar system’s earliest history with unprecedented resolution in time and space.

Recent analytical advances in the precision of isotope ratio measurements make it possible not only to date meteorites at sub-million-year precision, but also to identify distinct nucleosynthetic isotopic signatures. This allows scientists to identify genetic links between planetary materials and helps constrain the area of the disk a given meteorite originated from.

Most meteorites come from asteroids located in the main asteroid belt between Mars and Jupiter and have traditionally been viewed as samples from bodies that formed where they are found today. However, recently, this perspective has changed dramatically with the discovery of a fundamental genetic dichotomy observed in the nucleosynthetic isotope signatures of NC and CC meteorites. This discovery, combined with the establishment of a precise chronology for the accretion of meteorite parent bodies, has enabled the integration of meteoritic constraints into large-scale models of disk evolution and planet formation.

Nucleosynthetic isotope anomalies arise from the heterogeneous distribution of presolar phases, and ultimately reflect that the solar system incorporated material from different stellar sources. As evident from analyses of presolar grains contained in primitive meteorites, the solar system’s molecular cloud comprised materials with strongly variable isotopic compositions. Although processes within the solar system’s parental molecular cloud and/or the circumsolar disk homogenized these materials relatively well, small heterogeneities exist that have been sampled at the scale of meteorite components, bulk meteorites and planets. Nucleosynthetic isotope anomalies have been identified for many elements. The team focused on those elements (oxygen, chromium, titanium, molybdenum, nickel, ruthenium and tungsten) that are most relevant for the definition of the NC–CC dichotomy and provide the most detailed insights into the dynamics of the early solar system.

“The NC–CC dichotomy most likely reflects the separation of the early solar system into an inner and outer disk separated by Jupiter,” Kruijer said.

The team said linking the chronology of meteorite parent-body accretion with the NC–CC dichotomy provides new insights into the dynamics and large-scale structure of the solar protoplanetary disk, the formation and growth history of Jupiter and the accretion dynamics of terrestrial planets, including the delivery of water and highly volatile species to Earth.