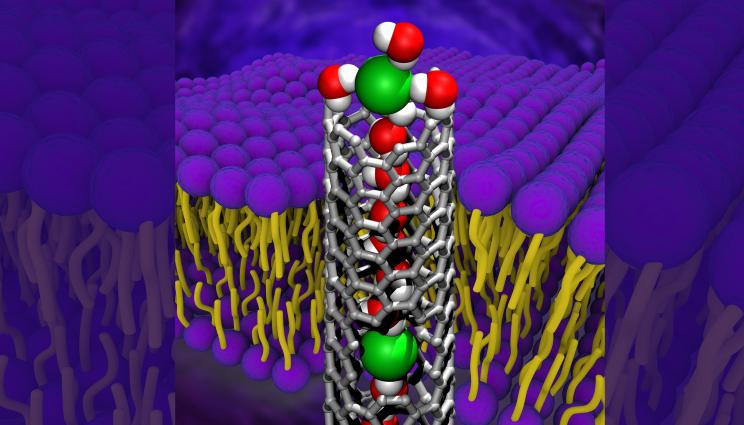 A carbon nanotube porin embedded in a lipid bilayer with an anion (green) at the entrance of the carbon nanotube porin. The anion is fully hydrated, i.e. surrounded by bound water molecules, which it needs to shed before entering the nanotube. A window in the nanotube (below) shows another anion that shed some of those water molecules and entered the tube interior. Image by Zhongwu Li, Fikret Aydin, Tuan Anh Pham and Alex Noy/LLNL.

Trying to determine how negatively charged ions squeeze through a carbon nanotube 20,000 times smaller than a human hair is no easy feat.

Not only did Lawrence Livermore National Laboratory (LLNL) scientists do that but they found that those ions are unexpectedly picky depending on the anion (a negatively charged ion). The research appears in ACS Nano.

Inner pores of carbon nanotubes combine extremely fast water transport and ion selectivity that could potentially be useful for high-performance water desalination and separation applications. Determining which anions are permeable to the nanotube pore can be critical to many separation processes, including desalination, which turns seawater into fresh water by removing the salt ions.

“Seeing differential selectivity for diverse anions is important because of the need to design very selective membranes that could separate these ions,” said LLNL scientist Alex Noy, lead author of the article. “A good example could be chemical separations where you always need to remove certain species selectively.”

Single-valence (monovalent) anions are notoriously hard to separate, as they are similar in size and are not chemically reactive.

“The observation of this strong differential selectivity is based on a mechanism that is unique to the nanometer-scale pores and thus could open up a possibility to design membranes with selectivity to the other kinds of chemical species,” said Zhongwu Li, the first author of the paper. “That could ultimately pave way to a new generation of precise chemical separations membranes.”

The team then applied first principles molecular dynamics simulations that revealed that the origin of this strong differential ion selectivity is partial dehydration of anions upon entry into the narrow CNTP channels.

“In general, an ion with lower hydration energy permeates more readily compared to an ion with higher hydration,” said Tuan Anh Pham, an LLNL scientist and a co-author on the study, who directed the modeling part of this research. “These results provide additional insights on the mechanism of ion selectivity in these pores and also point to the factors that researchers need to take into account when designing artificial ion-selective channels and membranes.”

Future work will investigate activation energy barriers for other types of ions entering the CNTPs.

Other LLNL researchers include Yuhao Li, Yun-Chiao Yao, Fikret Aydin and Cheng Zhan. Researchers from Southeast University and Yale University also contributed to the research. The project was funded by the Department of Energy’s Office of Science and the LLNL Grand Challenge Program.

Lab steps on the gas to enhance chemical production