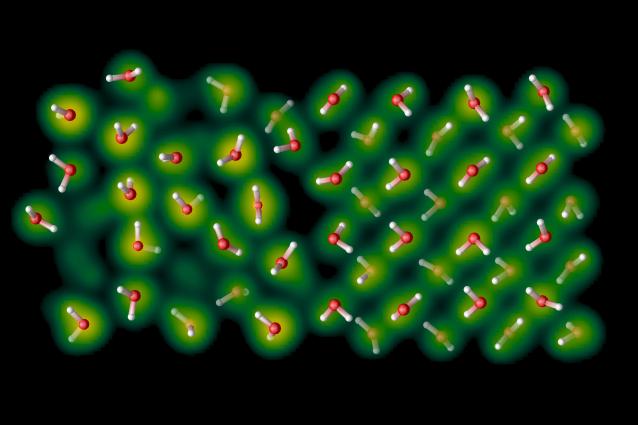 Visualization by Eric Schwegler/LLNL A snapshot from a first-principle molecular dynamics simulation of ice-VII (on the right) in contact with liquid water (on the left). As the simulation progresses the position of the solid-liquid interface can be monitored and used to accurately determine the location of the melting temperature of water under high pressure conditions. 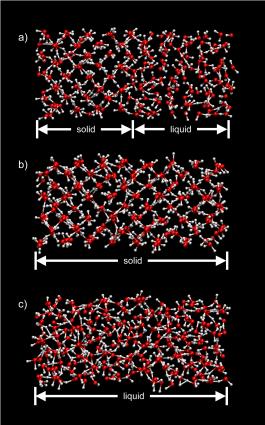 LIVERMORE, Calif. – The deep interior of Neptune, Uranus and Earth may contain some solid ice.

Through first-principle molecular dynamics simulations, Lawrence Livermore National Laboratory scientists, together with University of California, Davis collaborators, used a two-phase approach to determine the melting temperature of ice VII (a high-pressure phase of ice) in pressures ranging from 100,000 to 500,000 atmospheres.

For pressures between 100,000 and 400,000 atmospheres, the team, led by Eric Schwegler, found that ice melts as a molecular solid (similar to how ice melts in a cold drink).

But in pressures above 450,000 atmospheres, there is a sharp increase in the slope of the melting curve due to molecular disassociation and proton diffusion in the solid, prior to melting, which is typically referred to as a superionic solid phase.

"The sharp increase in the melting curves slope opens up the possibility that water exists as a solid in the deep interior of planets such as Neptune, Uranus and Earth," Schwegler said.

Determining the melting curve of water is important to many fields of science, including physics, chemistry and planetary science.

It has been proposed that the cold subduction zones in Earth are likely to intersect with the high-pressure melting curve of water, which would have profound implications for the composition and transport of materials in the interior as well as the long-term evolution of the planet as it cools.

The new research pinpoints the melting curve at extremely high pressures (350,000 to 450,000 atmospheres of pressure), similar to those found in the interiors Neptune, Uranus and Earth.

At higher pressures, the team found that the onset of molecular dissociation and proton diffusion under pressure occurs gradually and bears many similarities to a type-II superionic solid, such as lead fluoride.

"To accurately determine the melting temperature of water, we used a two-phase simulation method that is designed to avoid the large super-heating and cooling effects that are often present in single-phase heat-until-it-melts or squeeze-until-it-freezes approaches," Schwegler said.

The article appears in the Sept. 22 online edition of the Proceedings of the National Academy of Science.