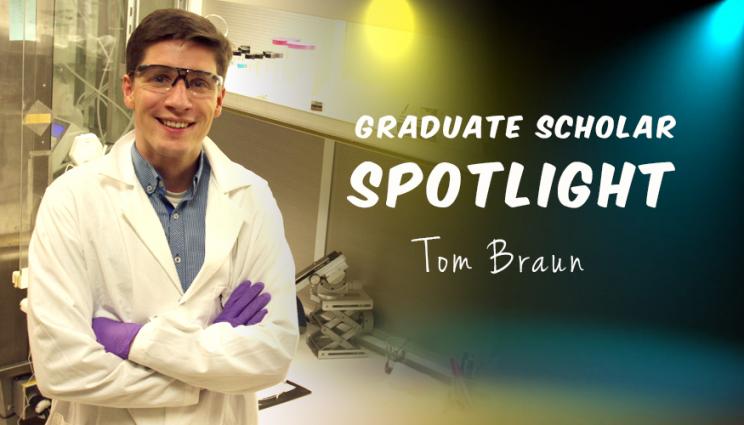 Tom Braun is a graduate scholar at Lawrence Livermore. Photo by Kate Hunts/LLNL

Editor's Note: This is one in a series of articles highlighting the diverse group of Lawrence Livermore National Laboratory (LLNL) postdocs and graduate scholars.

Describe your research: My research focuses on the integration of nanostructured materials into functional devices. Specifically, I am working on the fabrication of functional, uniform thin film coatings on spherical surfaces. When certain nanoporous coatings are applied on the inside of a sphere, for example, they become very interesting to the inertial confinement fusion (ICF) community since they can be used as a surrogate for cryogenic deuterium-tritium (DT) fuel ice layers, or to bring dopants for diagnostics and nuclear physics experiments in direct contact with the DT fuel.

What are you working on at the Lab? I am part of a research effort to integrate a very uniform nanoporous foam layer into a spherical fusion capsule, which is being used for ICF experiments at the National Ignition Facility (NIF). With the collaboration of researchers from LLNL, Los Alamos National Laboratory (LANL) and General Atomics, we were able to line a target capsule with a uniform polymer foam and conduct the first-ever liquid deuterium-tritium (DT) fuel layer implosion at NIF. These experiments provide an opportunity to explore the relationship between hot-spot convergence ratio (the initial fuel radius divided by the imploded radius) and the robustness of hot-spot formation during ICF implosions.

What interested you in the Lab? I came to the Lab as an undergraduate student and, I have to admit, I didn’t know much about it. However, my adviser in Germany spoke highly of LLNL and I was really interested in the research project, so I decided to apply.

What do you enjoy most about the Lab? One thing I really enjoy here at LLNL is the possibility of working in interdisciplinary teams, where every member is an expert in his or her own field. I am working hand in hand with people who have multidisciplinary backgrounds and a very wide range of capabilities.

I also am really glad that I get the chance to perform cutting-edge research on a daily basis. I feel very supported by my group and the Lab to find solutions for the challenging research tasks, which allows me to solve fundamental problems in materials sciences and to see these solutions being applied to real world problems, which is a great experience.

What have you learned since joining the Lab? That you never stop learning. My background is in physics and materials science and since I started at the Lab, I’ve learned a tremendous amount about chemistry and engineering. Fortunately, we have some very talented people at the Lab and getting to interact with them on a daily basis has helped me a lot.

Another thing I learned is that there is a big difference between a proof of principle experiment with a successful prototype and delivering a final product to be routinely used at a big facility like NIF. I spent many hours working on performance and process optimization.

What has been your biggest challenge to overcome? Two years ago, our experimental yield dropped unexpectedly and previously successful processes just seemed to stop working. It took a long time to find the cause and required a painstaking method of analyzing all potential sources of error and testing them. Staying positive at that time was sometimes not easy, but not impossible, and usually after a lunch break we had some new ideas to test and try. We didn’t give up, found the source and were able to fix it.

What has been your biggest accomplishment so far? One big accomplishment was the successful development and final delivery of working foam-lined ignition targets to be used in an experiment at NIF. It took several years to develop the approach that enables the fabrication of these targets. Critical components included the development of suitable aerogel chemistries with engineered rheological properties, filling a prefabricated shell with aerogel precursor solution with high precision, creating uniform polymer gel coatings inside the ablator capsule, supercritical drying and foam doping. It is very rewarding to see several years of work come to a successful completion.

My first "professional" job was in consulting with a very big company in Germany that supplies trucks, buses, engines and turbomachinery. My team and I developed and implemented an energy efficiency concept that works purely on motivating employees. The results were really well received -- we thought for a long time on doing it full time for other companies. I did get this particular job as part of a scholarship program that had the goal of qualifying its participants to become a personality of entrepreneurship and leadership. I applied with my CV, did a phone interview, went in for an interview in person and luckily got the opportunity.

Who/what inspired you to pursue a career in a STEM field? I am very interested in figuring out and understanding how the things around me work. That goes from "Why is the sky actually blue?" to "What motivates people to do the things they do?" Fortunately, my parents encouraged me to ask these kinds of questions and we tried to find answers to them together.

After high school, I applied to a few universities to study physics and psychology. However, due to the German system, I had to choose one. Physics won because I was fascinated by the double-slit experiment, in which light behaves as a particle or a wave depending on how an observer measures it. Look it up on YouTube; it’s really cool.

What do you enjoy doing in your spare time? I enjoy the outdoors a lot. The Bay Area is great for that, as it has so many different opportunities. Hiking, climbing, skiing, you name it. If I have the chance, I also really like traveling and exploring new places.

Where do you see yourself in 10-20 years? Ten to 20 years is a really long time scale. In the next few years, I hope to continue to broaden my scientific skill set and further develop my professional career at the Lab. I also would like to pursue and expand some of my own research ideas – potentially in the Lab’s Laboratory Directed Research and Development (LDRD) program. In the long term, I hope to see myself in a role that allows me to bring new ideas and initiatives into the organization of the Lab and really make an impact on our scientific mission. Ten years from now I want to have made an impact on the Lab in a significant and positive way.

What book do you think everyone at the Lab should read (and why)? "Heinrich von Ofterdingen/Henry von Ofterdingen" by Novalis. The hero in the book undergoes a journey of self-realization and tries to learn about the hidden inner meaning of the world itself. I think it is a great book as it tries to "understand" the world around us through poetry and fairy tales.

What is the best movie that you’ve seen in the last year? "Amélie" is a movie I watch probably once a year. It is a very playful, feel-good movie with great music.

What is a common misperception about you? I sometimes get asked why I did not choose a career path that involves more creativity. However, I think, that my job involves a great deal of creativity – coming up with an experiment to test an idea, devising an alternative hypothesis or developing a solution to an existing problem, just to name a few. I actually think that being creative is one of the essential skills for a scientist.

Who do you follow on Twitter (and why)? I currently don’t have a Twitter account, although a friend from the Lab is trying to convince me to get one. Apparently, it helps her to stay in contact with fellow scientists from her field and makes collaborating easier. That actually sounds like a good thing to me.

Who are your heroes? Don’t tell her, but my sister.

Physical and Life Science at LLNL