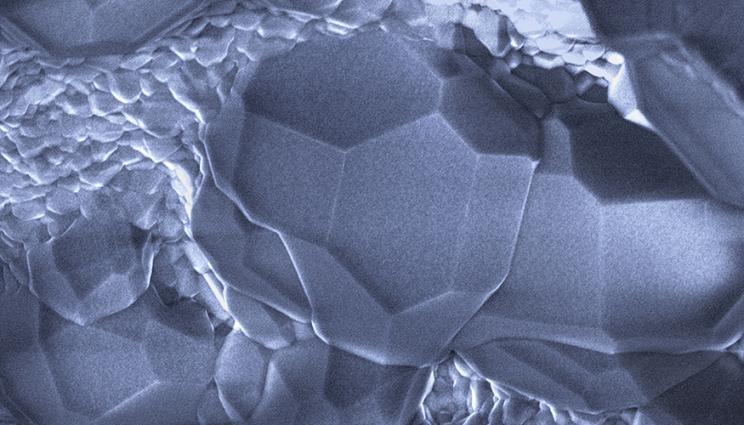 Methane hydrate is a crystalline solid formed from methane gas and water that occurs naturally in the seafloor of the continental shelves worldwide. Hydrate is considered a source of natural gas, a natural hazard or a potential contributor to ocean acidification and climate change.

Its presence lowers the electrical conductivity of the seafloor in comparison to hydrate free formations, which allows it to be imaged by geophysical methods.

Interpreting this data requires a thorough understanding of the electrical properties of gas hydrates. Lawrence Livermore National Laboratory (LLNL) scientists and collaborators at the U.S. Geological Survey (USGS) and Scripps Institution of Oceanography at UC San Diego (UCSD) synthesized methane hydrate with sediments to determine the electrical conductivity of the mixtures.

Current estimates suggest there are substantially higher amounts of natural gas associated with gas hydrates than all the continental shale reservoirs combined.

“Determining the global distribution and inventory of petrogenic organic carbon in the crust is important to gaining a basic understanding the Earth’s deep carbon cycle,” said Wyatt Du Frane, an LLNL material scientist and contributing author of a paper appearing on the cover of Geophysical Research Letters. “Marine gas hydrates also are considered a potential source of natural gas in countries that lack conventional resources.”

Measurement of seafloor electrical conductivity, either using borehole logs or geophysical prospecting methods, is one of the most reliable ways of estimating hydrate location and abundance, but these methods need to be calibrated using laboratory measurements on hydrate-sediment mixtures.

The team conducted laboratory conductivity measurements on mixtures of hydrate, sand, silt and seawater. Marine gas hydrates (most commonly methane hydrate) form from water and natural gas in the pores of marine sediments.

“Our lab results are consistent with wellbore core samples obtained in the field that show high concentrations of gas hydrate. This gives geophysicists validated target for locating and mapping distributions of this type of gas hydrate formation in the seafloor,” Du Frane said.

Hydrate was synthesized from pure water ice and flash frozen seawater, with varying amounts of sand or silt added. Electrical conductivity was determined by impedance spectroscopy, using equivalent circuit modeling to separate the effects of electrodes and to gain insight into conduction mechanisms. Silt and sand increase the conductivity of pure hydrate; likely by salt contributing to conduction in hydrate.

In nature, gas hydrates are ice‐like crystalline structures with encaged molecules, usually methane, that form at temperatures and pressures found on the continental shelves deeper than about 500 meters. Although vast amounts of carbon are sequestered as hydrate, 1,000 to 100,000 gigatons globally, this total is uncertain.

The majority of hydrate is dispersed at low concentrations, but some marine gas hydrate forms in high concentrations as pore‐filling material in clastic sediments such as sands and silts. These deposits could provide a supply of natural gas, particularly for countries that lack conventional hydrocarbons. Several offshore production tests already have been conducted.

Dissociation of gas hydrate situated at the edge of its stability field has been implicated in seafloor landslides, which may potentially generate tsunamis. Du Frane said this could lead to damage to offshore drilling rigs that could result in safety issues or oil spills into the ocean.

In addition, rapid release of methane to seawater could contribute to ocean acidification and even climate change if methane reaches the atmosphere in shallow arctic waters.

Other Livermore contributors include Ryan Lu and Jeff Roberts (now at UCSD) as well as Steven Constable from Scripps and Laura Stern from the USGS.

The work is funded by the Department of Energy and the USGS.