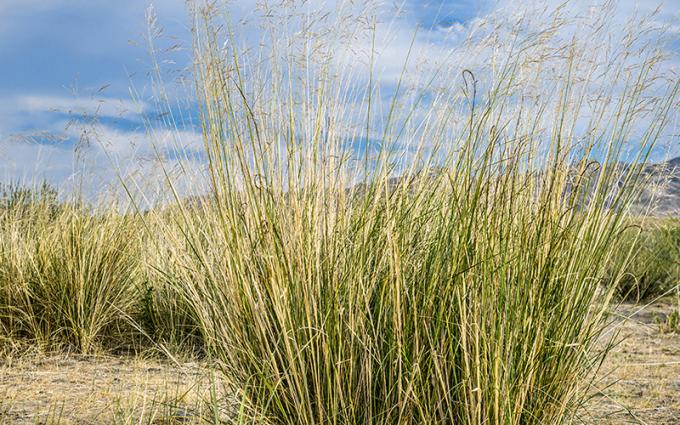 Lawrence Livermore scientists and collaborators are studying switchgrass, which can grow and propagate in marginal soils, making it a good candidate for sustainable biofuel production.

Switchgrass, a perennial native to the tallgrass prairie, is one of the most promising bioenergy crops in the United States, with potential to provide high-yield biomass on marginal soils unsuitable for traditional agricultural crops.

New research by Lawrence Livermore National Laboratory, UC Berkeley, the University of Oklahoma, Lawrence Berkeley National Laboratory and the Samuel Roberts Noble Foundation is looking into whether switchgrass cultivation could result in an enhancement of key ecosystem services such as carbon sequestration, soil fertility and biodiversity.

The team recently received funding from the Department of Energy’s Office of Biological and Environmental Research to conduct the research. LLNL will receive about $1.6 million over five years.

The team found that switchgrass (Panicum virgatum) can grow and propagate in marginal soils, making it a good candidate for sustainable biofuel production.

"We’ll target plant-microbe interactions during establishment to gain insight into how symbiotic and associative microbes improve plant performance and biomass production under nutrient- and water-limited conditions," said Jennifer Pett-Ridge of LLNL, who is co-principal investigator of the project.

Plants and microorganisms have co-evolved for millions of years. Understanding the biochemical and genomic basis of beneficial plant-microbial interactions is a challenge for agriculture, forestry and invasive species management. Better knowledge of the molecular interactions within the plant microbiome also may benefit sustainable crop management. This is particularly relevant to the bioenergy feedstock sector, which is keen to avoid the "food for fuels" debate, and utilize land that is not currently in high-value food production.

At LLNL, the team will conduct both isotope tracing studies with the Lab’s NanoSIMS imaging mass spectrometer and measurements of gene expression to help identify how probiotic microorganisms alter interactions with switchgrass.

The Energy Independence and Security Act (EISA) of 2007 mandates 36 billion gallons of annual biofuel production by 2022, approximately half is expected to be produced from cellulosic feedstock. Switchgrass has been identified as one of the most promising bioenergy crops in the U.S., with the potential to provide high-yielding biomass.

Switchgrass is a native North American prairie grass, with broad adaptability and minimal nutritional needs, meaning it could be cultivated on marginal lands that are unsuitable for agronomic crop plants. If cultivated on marginal lands, acreage for switchgrass would increase substantially. Roughly 11 percent of the U.S. mainland is comprised of "marginal lands" and represent an untapped agronomic resource well-suited to switchgrass’ deep, extensive root growth architecture, according to Pett-Ridge.

In Oklahoma, and the classic "Dust Bowl" region, switchgrass cultivation also might represent a means to re-establish soil organic carbon content (via root biomass for example), prevent soil erosion and restore ecological services. History has shown these soils are not "indestructible and immutable" as once thought and were degraded by poor agronomic practices in the early 20th century. This land can support little row-crop agriculture without substantial irrigation and fertilizer inputs, but may be suitable for second-generation cellulosic bioenergy feedstock, without competing with food production on prime farmland, Pett-Ridge said.

To meet the Department of Energy’s goal to replace 30 percent of petroleum-based transportation fuels with biofuels by 2030, the U.S. will require more acreage dedicated to bioenergy crops and substantial productivity increases.

To understand the relationships between switchgrass productivity and environmental effects in marginal soils, the team will dissect plant-microbial interactions within superior cultivated switchgrass, growing under a range of resource limitations and document how these interactions contribute to desired ecosystem services.