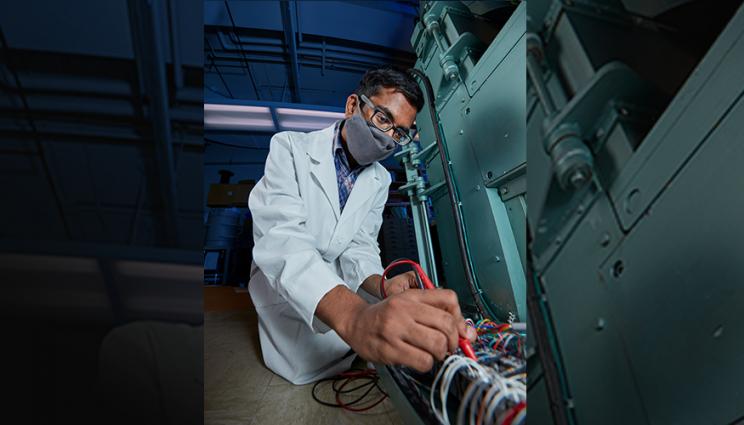 Graduate student intern Daniel Martin works in Lawrence Livermore’s Nuclear Counting Facility, where he has played a key role in instrumentation upgrades over the past three summers.

When Daniel Martin put the finishing touches on an autonomous vehicle robot, complete with an ultrasonic sensor to detect and evade obstacles, he knew he wanted to become an engineer. A high school student at the time, he was fascinated by the design and functionality of robots. Fast forward several years, and Martin is now a second-year electrical engineering Ph.D. student at the University of California, Davis. Fresh off the heels of his third internship with Lawrence Livermore National Laboratory (LLNL), he’s still driven by that fascination.

“I love electrical engineering because it allows me to explore robotics and embedded systems as well as computer science and engineering,” said Martin, who first applied to LLNL’s summer internship program in 2019. To his surprise, he heard back from Steve Hunter in the Engineering Directorate the day after he submitted his application.

“We have a continuing need for engineers, because our workload is growing,” Hunter said, before explaining that the Engineering Directorate is invested in thorough, intentional hiring practices.

Martin’s first internship was one of three aimed at ongoing efforts to rebuild old instrumentation in the Lab’s Nuclear Counting Facility (NCF). Using automated sample changers, the NCF has conducted high-sensitivity radiation measurements since the start of radiochemical diagnostics to advance the LLNL nuclear test program. Built in the 1960s, the changers have remained in their original condition — with the exception of some modest control changes — for decades. They’re designed to process samples on gamma spectrometry instrumentation.

The project provided an exciting opportunity to learn from Hunter’s mentorship and gain insight beyond the classroom, which was important for Martin as a rising junior at UC Davis. “There’s some things that courses don’t really teach that internships do,” he said. So, it didn’t take much convincing when his mentor invited him to return for a virtual internship — this time with NCF manager Keenan Thomas from the Physical and Life Sciences Directorate — in the summer of 2020. “The Lab really cares about the interns,” Martin noted. “They offer seminars and provide a lot of support and encouragement, so I wanted to continue doing the work.”

Today, the NCF supports a wide range of experiments in everything from basic nuclear science to nonproliferation across the Lab. For example, one of the central diagnostics used to assess the yield of a historic National Ignition Facility (NIF) shot in August is performed by sending activation foils from NIF to the NCF for gamma spectrometry. “The sample changers are the absolute workhorses for these projects, Thomas said, “so mitigating the risk of having one fail due to age is critical for maintaining our high-volume sample processing capability for LLNL.”

Thomas served as principal investigator for the recent installation of new hardware on five changers, a major feat in the effort to revamp legacy assets in the nuclear test program. The goal of the project, which Thomas and collaborators finished in September, was to overhaul aging electronic control systems to ensure that the systems last for decades to come. Notably, the team didn’t make any mechanical or motor modifications as the original components are still in great shape.

The largest LLNL project Martin has worked on to date, this opportunity showed him how to build a project from the ground up. “I looked at old schematics to determine what needed to be changed,” the three-time intern said. “It was really gratifying to help complete this process — from the design phase through testing and validation — and see my hardware diagrams come to fruition.”

Martin credits both Thomas and Hunter for his unique, hands-on experience at the Lab. And while he’s still formulating his post-graduate plan, he recognizes how vital the Lab has been in his journey thus far. “My Lab advisers have really shown me that the possibilities are endless, so there’s no need to limit myself professionally.”