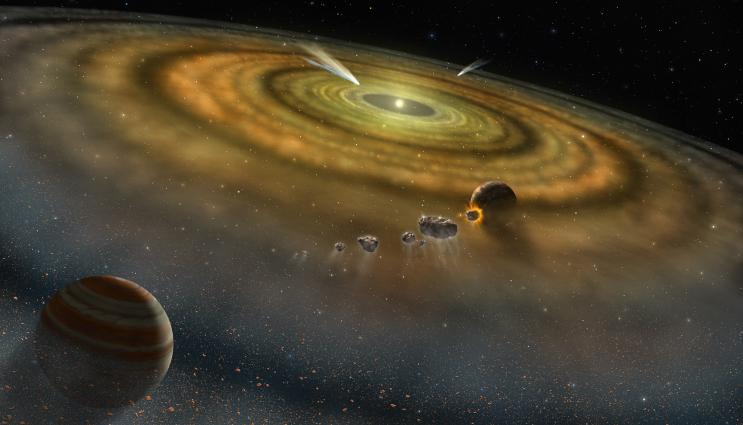 An artist’s conception of the developing solar system, with the young sun at its center and (proto-)planets accreting dust and debris from the disk. Image courtesy of NASA.

By looking at the range of isotopic variations in terrestrial and meteoritic samples, a Lawrence Livermore National Laboratory (LLNL) scientist and collaborators have figured out that Earth and Mars formed by collisions of planetary embryos originating from the inner solar system.

Rocky planets may have formed by two fundamentally different processes, but it is unclear which one built the terrestrial planets of our solar system. The planets formed either by collisions among planetary embryos from the inner solar system or by accreting sunward-drifting millimeter-sized “pebbles” from the outer solar system.

In the new research, the team showed that the isotopic compositions of Earth and Mars predominantly result from the accretion of planetary bodies from the inner solar system, including material from the innermost disk unsampled by meteorites, with only a few percentages of a planet’s mass coming from outer solar system bodies. The research appears in the Dec. 22 issue of Science Advances.

“Our data refute a pebble accretion origin of the terrestrial planets but are consistent with collisional growth from inner solar system embryos,” said LLNL scientist and co-author Jan Render, who performed part of the measurements while working as a postdoc at his previous position at the University of Münster. “This low fraction of outer solar system material in Earth and Mars suggests the presence of a persistent dust-drift barrier in the disk and highlights the specific pathway of rocky planet formation in the solar system.”

The amount of outer solar system material accreted by the terrestrial planets may be determined using nucleosynthetic isotope anomalies. These arise from the heterogeneous distribution of presolar matter within the solar protoplanetary disk and provide a record of the heritage of a planet’s building material. These isotope anomalies permit distinguishing between non-carbonaceous (NC) and carbonaceous (CC) meteorites, which are commonly assumed to represent planetary bodies that accreted in the inner and outer solar system, respectively.

The team used the recent observation of correlated isotope variations among NC meteorites to show that both Earth and Mars incorporated material unsampled among meteorites, determined the provenance and isotopic composition of this lost planetary building material and used this information to assess the amount of CC material accreted by Earth and Mars.

Other contributors include researchers from the University of Münster, the Université de Nice Sophia-Antipolis, the California Institute of Technology and the Museum für Naturkunde and the Freie Universitat in Berlin. The work is funded by the German Research Foundation.