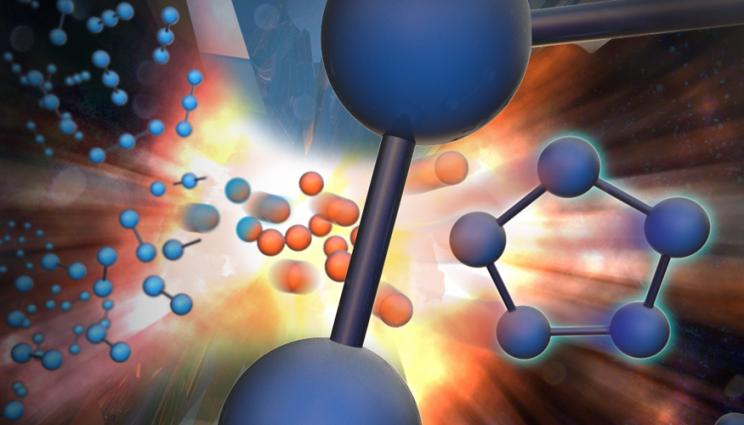 Lord of the Rings – synthesizing a five-membered ring nitrogen compound

The ring-structure compounds, known as pentazolates, are the last all-nitrogen members of the azole series. They have been notoriously elusive for the last hundred years, despite enormous efforts to make these compounds in either gas or condensed phases.

Starting from a mixture of cesium azide (CsN3) and molecular nitrogen, the LLNL scientists synthesized a stable cesium pentazolate salt compound at pressures just above 40 GPa (400,000 times atmospheric pressure) and temperatures near 2000 Kelvin. Surprisingly, the experiments revealed that CsN5 is stable at room temperature down to much lower pressures. A definitive structural confirmation was made when the experimental results matched with the predictions provided by their University of South Florida (USF) collaborators, including Brad Steele and Ivan Oleynik. In the end, the team was able to synthesize the N5 rings.

“This work provides a critical insight into the role of extreme conditions in exploring unusual bonding routes that ultimately lead to the formation of novel high nitrogen content species,“ said Elissaios (Elis) Stavrou, the lead LLNL physicist of this study.

The research appears in the Dec. 6 online edition of the journal, Chemistry of Materials.

USF theorists employed evolutionary structural search algorithms to generate the roadmap required for the LLNL experimentalists to synthesize and verify the ring-shaped molecular structure from their X-ray diffraction and Raman spectroscopy results.

Understanding the chemical processes governing the synthesis of single-bonded, nitrogen-rich compounds is one key required to unlock viable production strategies of high-energy-density chemical propellant and explosive formulations. Highly energetic single-bonded pure nitrogen phases have been previously synthesized; however, development of feasible applications has been denied due to the extreme synthesis conditions and their intrinsically low molecular stability.

"For more than 10 years, a plethora of theoretical predictions pointed toward alternative nitrogen-rich N-N molecular synthesis routes. And none of those paths seemed to lead to a convincing experimental verification,” Stavrou said.

To make matters worse, one of the most prominent ways to “force” nitrogen atoms to form single-bonded species is to create N5, or pentazolate rings. Indeed, "Stabilization of solid-phase N5 rings has never been achieved through conventional chemistry routes," said Joe Zaug, a LLNL physical chemist on this project.

As Stavrou further explained: "The knowledge gained in this study brings our community closer to understanding how to make stable (viable) nitrogen-rich energetic materials. We aim to pursue alternative synthesis routes derived from our recent results.”

Additional researchers on the project include Jonathan Crowhurst of LLNL and Vitali Prakapenka of the Advanced Photon Source/University of Chicago.

This research was funded by the Defense Threat Reducation Agency (DTRA) under the program mangement of D. Allen Dalton.