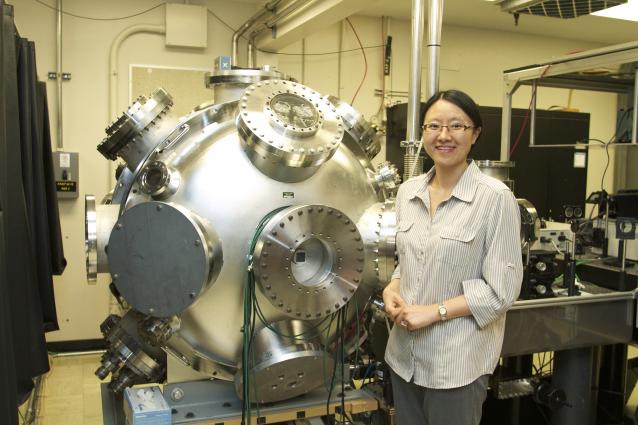 Yuan Ping stands next to the target chamber in the Europa laser bay, part of the Jupiter Laser Facility. Photo by Bob Hirschfeld/LLNL

Lab researcher Yuan Ping of the Physics Division has been named the recipient of the American Physical Society's Division of Plasma Physics (APS-DPP) 2011 Katherine E. Weimer Award. The award, established in 2001, recognizes the contribution and potential of women in plasma science and is given every three years to a female physicist in the first 10 years of her career.

"There are not many women scientists, especially in physics, so to receive this award is an honor," Ping said. "I have been lucky to work with great people, especially here at the Lab, and that has allowed me to do the research that was recognized."

Ping, a member of the high-energy-density physics section's shock physics group, was chosen for the award based on her "pioneering experiments to explore the interaction of high-intensity laser light with matter." Her work with this interaction began as a Ph.D. candidate at Princeton University, where she was the first to successfully demonstrate Raman amplification of laser pulses in plasma, creating an environment in which ultrahigh intensity laser pulses can be achieved without system destruction. This remains an active research area at facilities around the world.

In 2003, Ping joined LLNL as an E. O. Lawrence distinguished postdoctoral fellow and in 2006 became a  full-time Lab employee.

During her time, she has broadened her research from her thesis work to warm dense matter physics and relativistic laser-plasma interaction, an important facet in achieving fast ignition. She received the best paper by a postdoc award in the Physics and Life Sciences Directorate and the LLNL Science and Technology Award (co-winner) in 2006.

Her current research interests include multi-shock laser compression of materials to simulate conditions in the Earth's core. This research has tremendous value in areas such as seismology and geophysics. Ping's prolific research in these areas has resulted in 38 publications, including seven in top physics journal, Physical Review Letters.

Ping will receive the award at the APS-DPP annual meeting in Salt Lake City, Utah, in November, where she also will give an invited presentation on her research.