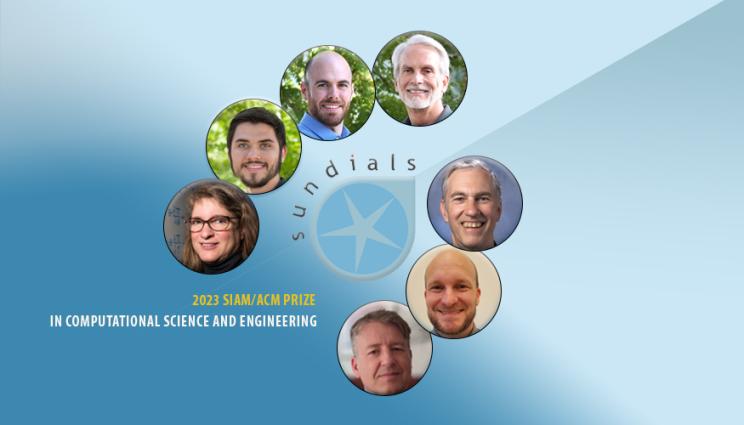 The Society for Industrial and Applied Mathematics (SIAM) and Association for Computing Machinery (ACM) announced that they have awarded the 2023 SIAM/ACM Prize in Computational Science and Engineering to the team behind the Lawrence Livermore National Laboratory (LLNL)-developed SUNDIALS software suite.

The prestigious award is handed out every two years and recognizes outstanding contributions to the development and use of mathematical and computational tools and methods for the solution of science and engineering problems. It is one of SIAM’s most significant awards and will be presented to the team at the 2023 SIAM Conference on Computational Science and Engineering in Amsterdam next February. It includes a monetary prize and a certificate.

“I am extremely humbled by this recognition,” Woodward said. “I am excited because I feel that this award shows that our computational science community values the work put into delivering both efficient algorithms as well as their high-quality implementations into robust and usable software.”

The SIAM/ACM award citation recognizes SUNDIALS for its “innovative research and development of nonlinear and differential/algebraic equation solvers for high performance computing (HPC) that provides unique, critical capabilities in the scientific software ecosystem.”

Team members pointed to two key innovations that make SUNDIALS unique: the co-development of fully adaptive time integrators and nonlinear solvers that do not require system matrices for stiff systems — thus lending themselves to extreme efficiency on HPC systems — and the careful implementations of all methods that allow SUNDIALS to easily be used on many varied computing systems and software environments.

Because of its ease, flexibility and extensive documentation, SUNDIALS has become internationally recognized as one of the most effective and efficient time integration libraries. It is widely used by government laboratories and in academic institutions and industry, leading to advances in a variety of applications including fusion device modeling, watershed modeling and reacting flow simulations.

“In numerous scientific and engineering applications, robust and efficient methods and software for evolving in time and solving nonlinear systems that may arise in these problems are critical to accurate, predictive simulations,” said Gardner, a computational scientist in LLNL’s Center for Applied Scientific Computing. “SUNDIALS provides scientists with advanced, adaptive algorithms for these purposes in a flexible, easy-to-use software library designed to run on systems ranging from laptops to the latest generation of supercomputers.”

The SUNDIALS core development team, many of whom have worked for decades on time integration and nonlinear solvers, developed the software to be portable and versatile, and have made it open source and freely available on GitHub. The excellent documentation the team has included with SUNDIALS has enabled users of many disciplines to easily incorporate it into their work, according to Brown. The package is downloaded or cloned more than 100,000 times each year.

Hindmarsh called the award a “major recognition of the many years of effort to produce quality mathematical software,” while other team members said it is indicative of the value of SUNDIALS to the computational science community.

LLNL’s Balos, a computational scientist in CASC and newest member of the SUNDIALS core development team, added that “winning the award is exciting to me for two reasons; for one, it recognizes the impact and legacy of decades of work by some brilliant people who I am honored to call teammates, colleagues and mentors. Secondly, it recognizes that our team has been able to continue to evolve SUNDIALS, decades later, in ways that have allowed it to both endure and expand its relevance to new scientific applications and new frontiers in computing such as exascale.”

For more on SUNDIALS, visit the web.