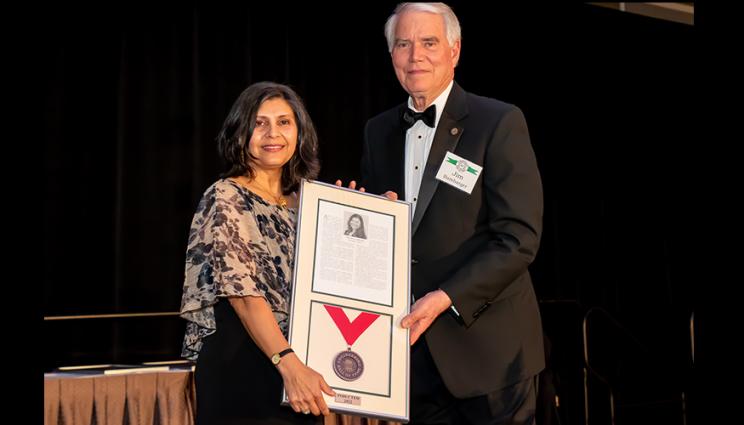 Huban Gowadia, the Lab’s principal associate director for Global Security, receives her induction plaque for the state of Alabama Engineering Hall of Fame (EHF) from Jim Bambarger, the chair of the EHF’s board of directors.

Lawrence Livermore National Laboratory’s Huban Gowadia has been inducted into the state of Alabama’s Engineering Hall of Fame (EHF).

The principal associate director for Global Security, Gowadia was one of 10 engineers inducted into the state’s EHF during a ceremony last month attended by about 250 people.

She was nominated for Alabama’s EHF by the former dean of the University of Alabama’s College of Engineering, Charles Karr, and retired U.S. Coast Guard vice-admiral and former head of the Transportation Security Administration, Peter Neffenger.

Gowadia described her reaction as being “absolutely floored” by her selection to the EHF, made by the organization’s 20-member board of directors.

“If you think about those who are already in the Alabama Engineering Hall of Fame, to have any association with them is a great honor,” Gowadia said. “I resonated with my fellow inductee, Mike Griffin, who said he was ‘honored beyond his merit.’”

Her 18 years working as a civil servant in the United States departments of Defense and Homeland Security were capped by service as acting administrator of the Transportation Security Administration, leading a $7.6 billion budget and a workforce of 60,000 employees charged with protecting U.S. transportation systems.

As LLNL’s principal associate director for Global Security, Gowadia is responsible for building and executing programs focused on intelligence, cyber and space security, as well as nonproliferation, counterterrorism and incident response across the fronts of chemical, biological, radiological, nuclear and explosive threats.

In her current position since early 2020, she leads more than 1,200 matrixed employees and manages an annual operating budget of about $500 million.

Gowadia was accompanied to last month’s ceremony by her parents, Aspie and Dhun Gowadia, and her brother and sister-in-law, Purazar and Jennifer Gowadia.