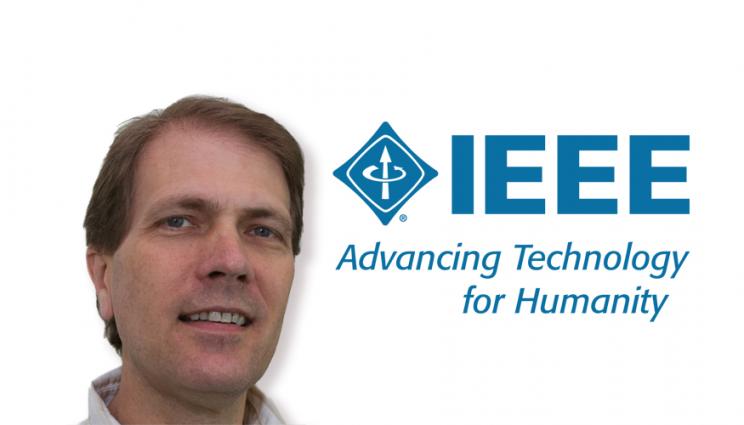 IEEE, the world's largest technical professional organization, has named Chief Technology Officer for Livermore Computing Bronis R. de Supinski to its prestigious 2021 Class of Fellows, recognizing him for his leadership in the design and use of large-scale computing systems.

IEEE, the world's largest technical professional organization, announced it has elevated Bronis de Supinski to the rank of fellow, recognizing Lawrence Livermore National Laboratory's (LLNL) Livermore Computing’s chief technology officer (CTO) for his leadership in the design and use of large-scale computing systems.

The prestigious IEEE fellow distinction, which takes effect Jan. 1, is the highest grade of membership in IEEE. Fewer than 0.1 percent of voting members are selected annually by the organization’s fellow committee for the honor.

“I am pleased to be elevated to an IEEE fellow,” de Supinski said. “I am grateful to LLNL, Livermore Computing and my colleagues for their essential contributions to the research and system development that are the hallmark of my achievements. These achievements have enabled me to reach a goal that I set for myself many years ago — to be a world-leading computer scientist. This honor is evidence that LLNL fosters an environment where truly meaningful impact can be made. I hope that many of the most significant accomplishments of my LLNL career are yet to come, such as the successful acquisition of El Capitan in 2023.”

In his role as CTO for Livermore Computing, de Supinski formulates LLNL's large-scale computing strategy and oversees its implementation, frequently interacting with high performance computing leaders and collaborating with industry and academia. Previously, de Supinski led several research projects in LLNL's Center for Applied Scientific Computing, and most recently led the Exascale Computing Technologies project and co-led the Advanced Scientific Computing program's Application Development Environment and Performance Team, which is responsible for the development environment on LLNL's large-scale systems. He continues exploring his interest in compilers, tools and runtime systems, particularly programming models, and serves as the chair of the OpenMP Language Committee. He also is serving as general chair of the 2021 International Conference for High Performance Computing, Networking, Storage and Analysis.

De Supinski earned his Ph.D. in computer science from the University of Virginia in 1998 and joined LLNL in July 1998. In addition to his work at the Lab, he is a professor of exascale computing at Queen's University of Belfast and an adjunct associate professor in the Department of Computer Science and Engineering at Texas A&M University.

Throughout his career, de Supinski has won several awards, including the prestigious Gordon Bell Prize in 2005 and 2006, as well as two R&D 100 awards, including one for his leadership in the development of a novel scalable debugging tool.

For more on the 2021 IEEE class of fellows and view the entire list, visit the web.