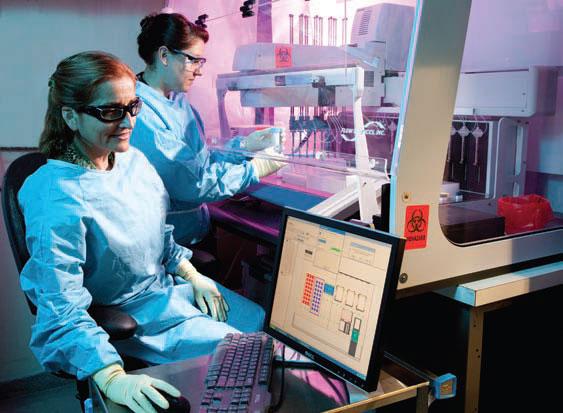 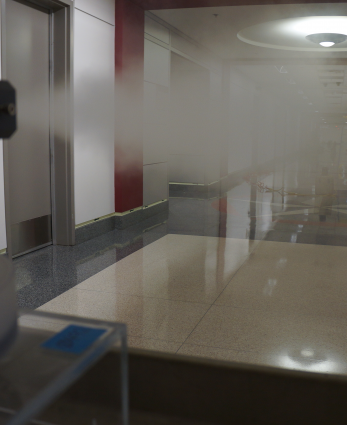 The airflow patterns of airborne particles can now be reliably and rapidly diagnosed in both indoor and outdoor venues, thanks to a technology developed by LLNL scientists -- DNA Tagged Reagents for Aerosol Experiments (DNATrax). The material is shown above in an airflow experiment. The technology garnered an outstanding technology development award from the Federal Laboratory Consortium.

Lawrence Livermore National Laboratory (LLNL) has again received recognition this year for its work to move breakthrough technologies into the commercial marketplace.

The FLC is the nationwide network of federal laboratories that provides a forum to develop strategies and opportunities for linking laboratory mission technologies with the marketplace.

Started in 1974, today the FLC has about 300 federal laboratories and research centers as members of the consortium.

A team of LLNL scientists and engineers has developed a safe and versatile material, known as DNA Tagged Reagents for Aerosol Experiments (DNATrax) , that can be used to reliably and rapidly diagnose airflow patterns and problems in both indoor and outdoor venues. Their work won an "outstanding technology development" award in the FLC judging.

Until DNATrax particles were developed, no rapid or safe way existed to validate air transport models with realistic particles in the range of 1-10 microns.

Successful DNATrax testing was conducted at the Pentagon in November 2012 in conjunction with the Pentagon Force Protection Agency. This study enhanced the team's understanding of indoor ventilation environments created by heating, ventilation and air conditioning (HVAC) systems.

DNATrax are particles comprised of sugar and synthetic DNA that serve as a bar code for the particle. The potential for creating unique bar-coded particles is virtually unlimited, thus allowing for simultaneous and repeated releases, which dramatically reduces the costs associated with conducting tests for contaminants.

Among the applications for the new material are indoor air quality detection, for homes, offices, ships and airplanes; urban particulate tracking for subway stations, train stations and convention centers and environmental release tracking.

Scientists from LLNL and the U.S. Environmental Protection Agency (EPA) have partnered to develop a rapid method for detecting viable anthrax-causing spores . Their collaboration netted the team an "outstanding partnership" award.

The need for processing large numbers of samples - and doing it speedily - was demonstrated during the 2001 congressional building anthrax contamination when more than 10,000 environmental samples were analyzed, and the facility reopening was significantly delayed pending sample results.

In addition, the RV-PCR method is cost-effective, semi-automated (so that better safety is provided for the analysts) and less prone to interference by outgrowth of other microbes.

Among other possible applications of the technology are: rapid verification of disinfection of hospital and clinical surfaces and devices; determining the safety of food products and food processing areas based on the absence of live bacterial pathogens; and verifying the safety of public drinking water supplies for absence of water-borne, disease-causing bacteria.

Efforts are now under way to transition the technology to Environmental Laboratory Response Network laboratories in the event of a possible future anthrax attack.

Members of the RV-PCR team included Staci Kane, Sonia Letant, Gloria Murphy and Teneile Alfaro of LLNL and Sanjiv Shah of the EPA.

A partnership for studying climate change

LLNL and 11 partner institutions have developed the Earth System Grid Federation (ESGF) to serve the data-driven needs of the climate research community. The collaboration was honored as an "outstanding partnership."

The ESGF supports the Coupled Model Intercomparison Project (CMIP) , which was established in 1995 by the World Climate Research Programme's Working Group on Coupled Modeling to provide a community-based infrastructure for global climate model diagnosis, validation, intercomparison and data access.

CMIP simulation model runs are key components of the periodic assessments of the Intergovernmental Panel on Climate Change (IPCC). The IPCC - and the scientists whose research supported the IPCC, including those from the ESGF - shared the 2007 Nobel Peace Prize.

Through ESGF, scientists are able to analyze coupled atmosphere-ocean general circulation models in a systematic fashion, a process that also serves to facilitate model improvement. Simulation model runs for the latest incarnation of CMI -- CMIP phase 5 or CMIP5 -- were essential for the 2013 IPCC Fifth Assessment Report.

To date, ESGF has made available more than 60 large-scale CMIP5 simulation model runs (more than 1.8 petabytes of data) from 27 worldwide climate research centers spanning 21 countries. ESGF portals are gateways to scientific data collections hosted at sites around the globe that allow the user to register and access the entire ESGF network of data and services. The open-source ESGF is used by virtually the entire climate research community.

LLNL's Dean N. Williams is the principal investigator for the ESGF.

Livermore Business Development Executive (BDE) Catherine Elizondo and former BDE Ida Shum worked with LLNL researchers and QuantaLife to negotiate and manage the license agreement and business relationships. The work of the Lab's Industrial Partnerships Office, QuantaLife and its successor company was tapped as an "outstanding commercialization success."

The founder of QuantaLife and the co-inventor of the technology is a former LLNL employee, Bill Colston. As QuantaLife's CEO, Colston raised multiple rounds of private funding and grew the company from four founders in 2008 to more than 60 employees by 2011.

The company was unanimously selected as the "most promising company" at the Personalized Medicine World Conference in 2010. QuantaLife commercialized the Droplet Digital(TM) Polymer Chain Reaction (ddPCR) system, the most accurate genetic analysis platform available.

While both digital and traditional real-time PCR methods carry out one amplification reaction per single sample, with ddPCR the sample is separated into a large number of partitions and the amplification is carried out in each partition individually. By partitioning the sample and eliminating background interference, the researcher is able to collect a more reliable and sensitive measurement of low concentrations of nucleic acid that may not have been detectable using real-time PCR.

QuantaLife's products drew the attention of Bio-Rad, headquartered in Hercules, Calif. In 2011, Bio-Rad acquired QuantaLife and its assets for $162 million in cash and future milestone payments.