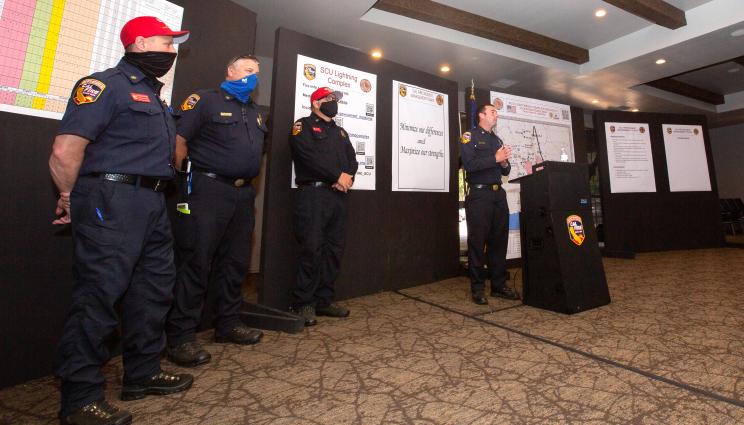 Cal Fire officials brief local city managers and others on the ongoing efforts to quell the SCU Complex Fire on Aug. 28. As of Sept. 1, the blaze had consumed more than 390,000 acres across five counties, making it the second-largest wildfire incident in state history. Photos by Julie Russell/LLNL.

When a severe lightning storm sparked what would become a conflagration consuming more than 390,000 acres and threatening the communities of Livermore and Pleasanton, volunteers with Lawrence Livermore National Laboratory’s Community Emergency Response Team (CERT) answered the state’s call for help.

Ignited by unusual summer thunderstorms in the early morning hours of Aug. 16, the blaze eventually dubbed the SCU Lightning Complex Fire quickly grew to burn portions of five counties, briefly shuttering LLNL’s Site 300 and creeping within miles of the main Lab campus. Due to the massive size of the fire and its proximity to the Livermore area, on Aug. 19, Cal Fire, through the state’s Office of Emergency Services, reached out to LLNL’s CERT for assistance, as part of California’s Emergency Mutual Aid agreement. It was the first time Cal Fire had called upon the Lab CERT team to respond to a major incident.

On Aug. 23, working with CalFire Incident Management Team No. 6, CERT members began reporting to the Cal Fire base camp at the Alameda County Fairgrounds in Pleasanton to staff the agency’s fire information call center. For the next week, working six-hour shifts, including midnight and swing shifts, the more than 20 Lab volunteers answered hundreds of phone calls from concerned residents, providing them with updated information on evacuations, telling evacuees if and when they could return home and instructing them on relocating their livestock. Volunteers also helped with food delivery and training in support duties. By the end of the week, CERT members had worked a total of 57 shifts, including overnights, with many members volunteering more than 30 hours.

Part of the U.S. Federal Emergency Management Agency’s CERT Program, the Lab’s CERT team was established in 2013. It consists of about 60 volunteer employees from across the breadth of Lab directorates, ready at a moment’s notice to support local first responders by offering immediate help to victims of disaster until professional emergency services arrive. Brad Bieck, fire inspector for Fire Protection in the Lab’s Emergency Management Department (EMD), provides the group with FEMA-standardized classroom and hands-on training in basic search and rescue, minor firefighting duties, fire safety, CPR and first aid skills, disaster psychology and incident stress. The training culminates in a large-scale disaster exercise.

Bieck, a retired firefighter who leads the LLNL CERT team, said the sheer scope of the SCU Complex Fire prompted Cal Fire officials to designate all local CERT teams as a necessary “key resource” to the wildfire response, putting out a call for all such units throughout Alameda County. For LLNL’s CERT volunteers, it was the first time they had been asked to put their skills to the test outside the Lab.

“Our CERT team has never really had a disaster to respond to in the seven years we existed, and even though this was a horrible incident, it was a shot in the arm that they needed,” Bieck said “These are people who want to help, they’re ready to help and they’re very capable. I think we can all be proud of our CERT team for stepping up and providing a vital key resource that the state needed.”

On several days, Lab CERT volunteer Neil Elam awoke at 3 a.m. to carpool to his morning call center shifts, after which he would head to the Lab to work his day job as a maintenance supervisor for LLNL’s Radioactive and Hazardous Waste Material department. Part of the original Lab CERT graduating class, Elam said he was “honored” to apply his training and work with professional fire and emergency crews to keep the public informed during a fast-moving and tragic situation.

“We have always had the heart to reach outside the fence if needed, so we were excited to be a part of this and provide a service to the community,” Elam said. “We were nervous because even though we were just answering phones, we were tasked with giving people critical information on their safety. A lot of folks were ranchers and had livestock and were looking at possibly losing everything they had. It was intense; some of the stories really rocked us to the core. To me, that was a lot of responsibility, but I was happy to do it. It was an awesome experience.”

Jenessa Dozhier, administrator for LLNL’s Office of Strategic Diversity and Inclusion Programs, worked and home-schooled her children during the day and afterward volunteered in the call center from 6 p.m. to midnight. Dozhier said she “took great pride” in the fact that the Lab wasted no time in deploying its CERT team and felt like they accomplished their goals of aiding first responders and providing comfort in a disaster.

“When I trained to become a member of the LLNL CERT team it was my hope that I could do some good and help others in need,” Dozhier said. “It was a wonderful feeling to hear the callers’ stress levels come down as we worked through the call and provided them with information and guidance. Sometimes, more than anything, that’s what people need in a time like that -- a friendly voice that can give answers, help people process their situation and calm down from the stress of an overwhelming situation. At the end of every call, the caller would thank us for helping them. It made it all worthwhile.”

“LLNL CERT members without a doubt aided and assisted an untold amount of people with much-needed information as countless people lived in fear from the threat of fire and thousands of structures were threatened,” he said. “I’m just so proud to be a part of the CERT group; we truly made a difference.”

The CERT team will continue staffing the call center as long as they are needed, possibly through mid-September. Cal Fire incident commanders and captains praised the team for their performance under pressure and thanked them for relieving some of the burden from the short-staffed firefighting units, many of which were overwhelmed by multiple large wildfires, by freeing them to put their full attention on suppression efforts. During the peak of the operation, the hotline received between 800 and 1,000 calls per hour and required 20 CERT members per shift to manage, according to acting EMD Head John Riley.

“I couldn’t be prouder of their enthusiastic response,” Riley said. “Victims who evacuated and residents who were warned of potential evacuation have called the county to express their appreciation for the excellent advice the teams provided. My management also expressed their appreciation, telling me that the dedication and commitment shown by our CERT volunteers reflects very favorably on the Lab.”

Aaron Ward, the associate director of Infrastructure & Operations at LLNL, said the real-world experience the volunteers received in a disaster such as the SCU Complex Fire demonstrates the value of the training in the CERT program and how the skills and knowledge gained can be a benefit not just to the Lab, but the community at-large.

“It’s certainly something that reflects well, not only on them as individuals in volunteering their time, but us as a Laboratory,” Ward said. “They’re trained to a national standard that can be utilized and put into action anywhere that they go.”

For more information on the LLNL CERT team, or to find out how to join, contact bieck1 [at] llnl.gov (Brad Bieck).