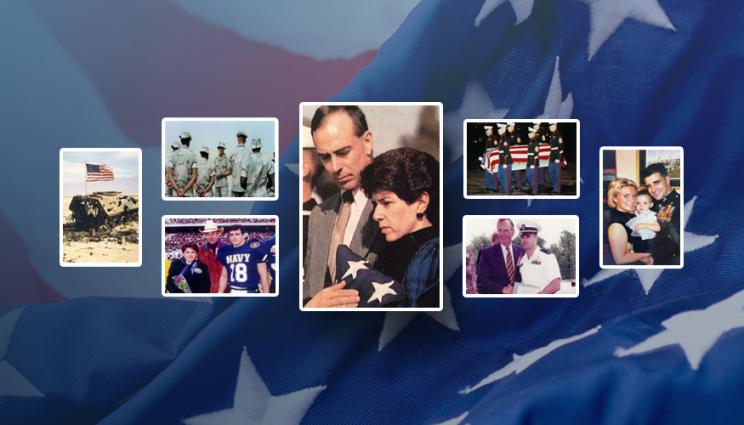 Shaun Stephenson’s story is one of service, loss, leadership and triumph. Through dedication and perseverance, he has taken a tragedy and turned it into something positive, not just for his family but for veterans everywhere.

Stephenson, a military veteran working at LLNL, wears two hats. He serves as the program manager for Strategic Military/Veterans Outreach and Recruiting in the Office of Government and External Affairs and as the training functional area manager in the Human Resource Directorate. He is currently building the military and veteran pipeline at LLNL, and he has oversight responsibility for institutional training. Before Stephenson’s current role, he was the division leader for Training and Development with responsibility for leadership and professional development at the Laboratory.

Stephenson’s journey began very typically. He was born in Las Vegas, Nevada, and was raised in Southern California in Torrance, Redondo Beach and West Covina. As a teenager, his family moved to Bountiful, Utah.

“Growing up in the Stephenson household was very busy with plenty of direction,” Stephenson said. “I had two brothers and we were very close. My father was a Marine and Green Beret in the Army, so me and my older brother Dion were being trained from an early age to be highly competitive athletes and Marines. We were always competing in just about every sport you can imagine including swimming, track, boxing, karate, wrestling, baseball, football and soccer.”

Being raised in such a military focused family, Stephenson participated in things like Devil Pups, a 10-day bootcamp at Camp Pendleton for kids. Upon graduation from Woods Cross High School in Utah, Stephenson followed his brother Dion’s footsteps and signed the dotted line, enlisting in the Marine Corps in 1989.

Many family members influenced Stephenson’s decision to join the military and serve his country.

While in the Marine Corps, Stephenson continued his education and attended numerous schools to include boot camp, Marine Corps combat training, school of infantry, amphibious reconnaissance course, jump school and combat dive school. He also completed other special operation certifications. Stephenson attended and graduated from the Naval Academy Preparatory School in Newport, Rhode Island. He attended the United States Naval Academy, graduating with a bachelor’s degree in economics. Along the way, he completed numerous certifications in safety leadership, leadership development, training and coaching.

Starting at boot camp in San Diego in June of 1989, Stephenson then began attending numerous schools at Camp Pendleton for infantry training.

“Every Marine is an infantryman before pursuing any occupational field,” he said. “I then took my initial testing to begin working in the Reconnaissance Indoctrination Program. I attended a few schools earning the Basic Reconnaissance Occupational Specialty in January of 1990. On Aug. 2, 1990, Saddam Hussein invaded Kuwait. We began to prepare for combat operations in the Middle East and I deployed in November for Operation Desert Shield and Storm. Once in the theatre we conducted our first operation and got word that evening that we had taken casualties during the Battle of Khafji on the border of Saudi Arabia and Kuwait. The next morning my company commander on the USS Frederick called me from his state room and informed me that my brother had been killed during the battle. I left my ship and was transferred to the USS Tarawa later flying to Fujairah, to Bahrain, to Spain and meeting up with my brothers remains in Dover, Delaware. I escorted him to my parents in Bountiful Utah Feb. 4, 1991.”

After the tragic loss of his brother, Stephenson continued to attend schools in the special operations community working for the first Force Reconnaissance Company in Camp Pendleton and Coronado.

“I had the opportunity to work with Sen. Hatch from Utah and President George H. Walker Bush, receiving a nomination to the United States Naval Academy, a childhood dream,” he said. “I attended the Naval Academy Prep School (NAPS) because I had just returned from the Gulf War and attending the prep school would determine if I could make it at the Naval Academy.”

One of Stephenson's main goals was to play college athletics. He walked on to the baseball and football team at NAPS playing 3B and wide receiver.

“The academic requirements were challenging for me but I did graduate at NAPS and attended the Naval Academy from 1992 to 1996. I played football for Navy and unfortunately never beat Army during my time at the academy, losing in four years by a total of six points.”

Unfortunately, Stephenson sustained an injury and had to have surgery which limited opportunities for future assignments.

“I wasn’t able to work in the special operations community and began my career in Light Armored Reconnaissance (LAR) operating out of Camp Pendleton as a platoon commander and executive officer at 1st LAR,” he said. “I deployed again in 1999 and 2000 in the western Pacific, operating in East Timor and the Middle East. I ended my career as the director of division schools leading a division level school with seven combat specialties preparing 4,000 Marines annually for combat operations.”

Stephenson spent 12 years in the military and said there were a few highlights during his career that really shaped who he is today.

“The first was becoming a special operations Marine,” he said. “I remember talking about it extensively as a kid with my dad and family but finally achieving the designation was incredibly rewarding. The second was graduating from the Naval Academy. I remember walking across the stage in disbelief holding that diploma not only for me but for my brother and family. The third is earning a starting position as a wide receiver playing for Navy. I was adamant about playing Division I football and reaching that pinnacle brought me to tears. My last highlight was a field promotion with my Marines in Khafji to captain where my brother was killed nine years earlier. This was one of the most emotional things I had done and to be standing side by side with Marines I had responsibility for, some of which had served with my brother, was incredible.”

He said the military challenged him and provided the foundation of character and leadership.

“It taught me to persevere in the face of adversity and how to work cohesively together as a unit to solve problems. I honestly don’t remember resting during my career always yearning for the next challenge,” he said.

Stephenson and his family are now honored as a Gold Star Family. Being a Gold Star family is an honor that no one wants, as it means you have lost an immediate family member who died while serving in a time of conflict in the defense of the country.

“I think my childhood prepared me for the Marine Corps and special operations community,” he said. “However, it didn’t prepare me for dealing with the death of my brother and the impact psychologically it would have on me throughout my life. I learned very quickly how important it was to surround yourself with people who love and care for you. Having to mature quickly while being a young Marine was challenging and so was following through on a pact my brother and I made with each other. The pact was made over a beer and cigar at Camp Pendleton and was simple: if one of us didn’t make it back from the Gulf War the other would drop his ashes on a parachute jump. I’ll never forget the feeling of having my brother’s ashes strapped to my chest, popping my parachute, cutting open the bag and my brothers ashes flying through my face, helmet and through the chute.”

Stephenson finds some sense of comfort by giving back and helping others by working closely with the Gold Star community, most notably the Children of Fallen Patriots that provides free education for children who have lost a mother or father serving our nation in the military.

The Laboratory recently designated a parking space that is reserved for Gold Star Families.

“I got incredibly emotional that our Lab cared enough for me and all Gold Star families to honor us by dedicating a parking place,” Stephenson said. “When I park in that spot it reminds me of my brother, and the sacrifice he made for our freedom and the generosity and love our Lab family has for Gold Star families. When I shared the news with my parents, it provided them with a sense of appreciation and respect for our Laboratory and the understanding of what a Gold Star family experiences.”

The Lab’s mission, values and priorities attracted Stephenson to LLNL, which he says align extremely well with the service mentality veterans possess.

“We are respected here at the Lab for our service and bring tremendous value as war fighters to our people, the products we produce and the mission space, which is so critical to national security,” he said. “The Lab gives veterans the opportunity to use our experience and skill set and make positive change and impact to what we do. As a Marine with my background, you would customarily say that it does not necessarily translate well to the mission of our Laboratory due to the nature of the work we do in the STEM fields. However, I, like many veterans, found a career and home at LLNL. I am extremely grateful for the opportunities given to me.”

Stephenson’s commitment to the military has crossed over into his role at the Laboratory.

“I care deeply about growing and sustaining our military and veteran population at the Laboratory,” he said. “We’ve just begun our efforts in filling the pipeline with now 507 reported veterans and we are going into a contract with the DoD regarding the highly sought after SkillBridge program bringing on board service members during their transition for up to six months to work at LLNL in an internship capacity with hopes of hiring full time. This program has incredible opportunity to serve our needs during a time of attrition and separations.”

In his personal life, Stephenson is just as busy as he is in his work life. Has been married for 25 years and has two children.

“I enjoy spending time with my beautiful wife Jennifer, my daughter Taylor (23) who’s a RN in San Diego and my son Cameron (20) who’s studying construction management at Chico State.” Outside of that, Stephenson enjoys coaching youth, high school and college athletes in football and baseball and teaching character and leadership development in high schools.”

He also is a consultant for a small company called StoryRock out of Salt Lake City that publishes and prints commemorative books and documentaries for Korean, Vietnam and Gulf War veterans.

“I’ve had the opportunity to go back to Kuwait twice and see the incredible growth and people prospering due to the sacrifice we made for their country,” he said. “It has brought everything full circle for me and our family.”